Casablanca is one of the greatest films of all time, and it has sometimes been called one of the great American propaganda films of the 20th century. The film was shot and released on the heels of the Second World War and it captured the initial hesitance of the American public to get involved in the war, hiding behind a veil of neutrality, only to eventually choose their side in the battle. The film examines the impossibility of neutrality in war.

Casablanca is based on an un-produced stage show called “Everybody Comes to Rick’s.” The play was inspired by a trip to Vienna and witnessing anti-semitism. It has an all-star cast including Humphrey Bogart, Ingrid Bergman, Paul Henreid, as well as Claude Rains, Peter Lorre and others. It was never expected to be a major success in Hollywood at the time, however it was rushed to release to capture the momentum of the war announcement and it won the Academy Award for Best Picture that year, as well as other Academy Awards, including Best Director (Michael Curtiz).

The film tells the story of Rick Blaine, the ultimate film noir figure, a seemingly jaded owner of a bar/cafe in Casablanca (“Rick’s Café Américain”). Casablanca was one of the larger cities in neutral Morocco during the war. People come and go through his bar or they become stuck in Casablanca, such as French Vichy government officials, rebels, German authorities, refugees trapped in Casablanca, and others. Although Rick professes to be neutral to the affairs of the world, we learn that he ran guns to Ethiopia in its war against fascist Italy, and he also was a fighter on the Loyalist side against the Franco regime during the Spanish Civil War. He is also a defender of his black piano player, Sam. One day, Rick gets his hands on two papers that were stolen from killed German soldiers. They are transit papers that allow their owners to pass through German occupied Europe to Portugal, which would allow them freedom to escape the war. The criminal who steals the papers in arrested by the local corrupt police authority and he dies in prison without telling anyone he gave the papers to Rick. Rick maintains a good working relationship with the corrupt police by allowing them to win in their gambling at the back of his bar.

Then Ilsa Lund enters Rick’s bar and asks Sam to play “As Time Goes By.” Furious, Rick approaches Sam after he had asked him never to play that song, but then he spots Ilsa, his former lover from Paris. She is in Casablanca with her husband, Victor Laszlo, a well known Czech resistance leader. He has been followed to Casablanca by a German military leader. As the movie progresses, Rick’s bar becomes a kind of microcosm for the battles raging across the world as a mix of different peoples with diverging interests all converge on his bar. This conflict comes to a head when the bar becomes filled with Germans singing “Die Wacht am Rhein” (“The Watch on the Rhine”) and their song becomes overpowered by French resistance fighters start loudly singing “La Marseillaise,” with the permission of Rick, further indicating his private allegiances. The bar becomes closed by corrupt police under false pretenses of “gambling!” One night in the deserted cafe, Ilsa confronts Rick for the papers he is rumored to possess. They discuss their past relationship in Paris. She explains she allowed their romance to develop because she thought her husband was dead or in a concentration camp, but when she discovered him alive, she left Rick without explanation. Then later Laszlo also confronts Rick for the papers after dangerously visiting him from a resistance meeting. Lazslo is arrested by the police for trumped up charges, and Rick persuades them to let him go because he will allow them to catch him without papers and imprison Lazslo for good. He convinces them that he and Ilsa will flee together using the papers. But at the last moment, he forces Lazslo and Ilsa to flee on the plane to Lisbon, holding the police at gunpoint, and Rick also shoots the German officer allowing Ilsa and her husband to escape. Then Rick and the head of police walk away together pledging to fight with the French resistance together as the “start of a beautiful friendship.”

Here are a few of the classic lines from the film:
“Here’s Looking At You, Kid.”

“I’m shocked, shocked to find that gambling is going on here!” (The croupier hands him his money.) “…Your winnings, sir.” “Oh, thank you very much!”

“Louis, I think this is the beginning of a beautiful friendship.” 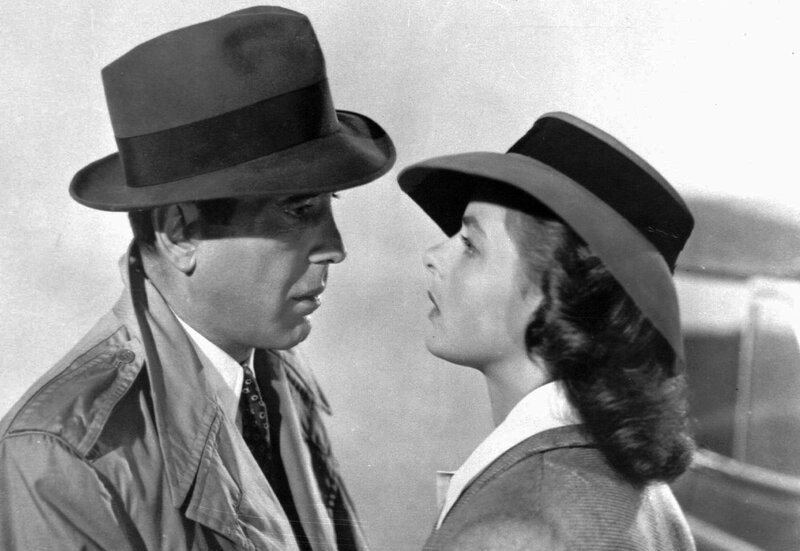 Throughout the filming, many of the actors were actually refugees or had allegiances in Europe. The filming of the competing anthems scene had many actors and extras in tears. Unusually, the film was shot in sequence because only the first half of the script was completed once filming began. There were certain problems in Bergman’s and Bogart’s scenes together because she was two inches taller, so he had often had to sit or stand on elevated boxes to appear taller. Despite having a cycle of writers on the script, the plot is wholly simple and remarkably consistent.

Casablanca is an incredible film, a perfect picture. It is a joy to watch again and again, with excellent acting, brilliant cinematography, a top notch cast, and a wonderful soundtrack, especially “As Time Goes By.” Casablanca is the height of Hollywood’s greatness.