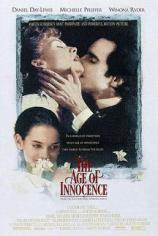 Surprisingly, The Age of Innocence remains mostly true to Wharton’s novel. Newland Archer is the main character -a rising attorney among the elite of Gilded Age New York. He is engaged to May Welland, but things go awry when a new woman arrives in their social circle, the Countess Olenska. Newland quickly falls in love with her, but he is in denial about the situation because of his existing commitment to May. The film is slightly more gratuitous than the novel, though not to any large degree. The novel is more about an affair that never was. Newland very nearly leaves May for the Countess, even after marriage, until it is discovered that May is pregnant. Newland decides to remain for the sake of the children and the family.

My favorite scene in both the book and the film occurs at the end. Many years later, May has passed on and Newland travels to Paris with his son who is now engaged. They pay a visit to the Countess Olenska at her flat. Upon arrival, however, Newland changes his mind and sits down on a park bench outside while his son goes up for the visit. Newland prefers to keep Mrs. Olenska as a memory. He looks up and catches a glimmer of sunlight, remembering Ellen Olenska as she once stood out on a pier overlooking the water.

I enjoyed this film (more than I have enjoyed certain other Scorsese films), though it was a box office failure at the time. Both Edith Wharton and Martin Scorsese portray the malaise of the upper crust of the Gilded Age in New York City wonderfully -the dreariness, the rigid conventions, the endless gossip- and suddenly, Ellen Olenska appears, representing freedom and an honest future. Yet somehow, we (and Newland) cannot escape. Newland is bound by a certain fate, tied up in his choices and social conventions. It is about ‘a love, not unrequited, but unconsummated.’ The Age of Innocence is an enjoyable film.