Films exploded in popularity and they grew up in the 1920s. Movies became bigger, more polished, more refined, and more expensive. Most filmmaking had migrated from New York and New Jersey to the West Coast. The “Big Five” studios of the era were: Warner Bros. Pictures which became prominent in 1927 with the release of The Jazz Singer, the first “talkie;” The Famous-Players Lasky Corporation (incorporated as Paramount Pictures in 1927) which possessed the greatest stars: Mary Pickford, Douglas Fairbanks, Rudy Valentino and others; RKO (Radio-Keith-Orpheum) Pictures, the smallest of the Big Five that grew in popularity in the ’30s with Astaire-Rogers musicals and others (eventually Orson Welles’s Citizen Kane); Metro-Goldwyn-Mayer, the massively successful company of the ’20s and ’30s; and the Fox Film Corporation. This was the era of the total control of the studios -production, distribution, theaters, and even actors. Anti-trust suits were eventually brought in the ’40s.

The three “Little Studios” of the era were: Carl Laemmle’s Universal Pictures; the partnership of Charlie Chaplin, Mary Pickford, Douglas Fairbanks, and D.W. Griffiith to form United Artists; and Columbia Pictures. Other smaller studios, like Disney, resided on “poverty row.”

In 1920, the “marriage of the century” took place when Douglas Fairbanks and Mary Pickford got married and divorced their respective spouses. Douglas Fairbanks bought an 18-acre tudor-styled home in Beverly Hills, dubbed “pickfair” by the press. It became a West Coast White House of sorts, serving as a gathering place for dignitaries, diplomats, celebrities, artists, and journalists.

The top stars of the era were: Charlie Chaplin, who continued his pursuit of perfection as he turned away from his short films to focus on more serious movies like The Kid and The Gold Rush; and other brilliant comedy stars like Buster Keaton who completed his magnum opus The General and Harold Lloyd famed for his situational comedy in Safety Last!; Gloria Swanson, a wildly successful silent actress who starred in many Cecil B. DeMille films; Tom Mix, the “King of Cowboys;” the elegant Norma Talmadge, known for her performance in Smilin’ Through (1922); Rudolph Valentino, the “Latin Lover” whose life ended far too soon; Douglas Fairbanks Sr., the “King of Hollywood;” and “Our Mary” Mary Pickford; the free-spirited Norma Shearer who eventually married Irving Thalberg; the sophisticated John Barrymore, who successfully made the leap from silent to “talkie” films before fading into obscurity as so many do in Hollywood; an independent and eccentric Swedish actress named Greta Garbo, the “man of a thousand faces” Lon Chaney; the sex icon and “it girl” Clara Bow; a bumbling juggler from Ziegfield’s follies named W.C. Fields; and the launch of long-lasting careers like Janet Gaynor.

Das Kabinett des Doktor Caligari (The Cabinet of Dr. Caligari) (1920)
Release Date: February 26, 1920 (Germany)
Director: Robert Wiene
This silent German Expressionist film is a classic of early horror cinema that explores the psychology of a mad hypnotist and his murderous creature called a “somnambulist.” But things are not always as they seem in this haunting picture. Dr. Caligari is a powerful early silent picture. 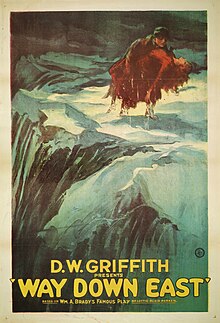 Way Down East (1920)
Release Date: September 3, 1920
Director: D.W. Griffith
Studio: United Artists
Starring Lillian Gish and Richard Barthelmess, this melodrama is one of Griffith’s great silent masterpieces. The film is about a pitiable young country girl, who is treated poorly and births a child to an unjust man who leaves her and then the baby dies. When rumors circulate, she is cast out and left for dead in a dangerous scene of ice and snow, only to be rescued and reunited with the love of her life in the end. 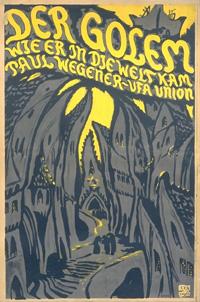 Der Golem, wie er in die Welt kam (The Golem: How He Came Into The World) (1920)
Release Date: October 29, 1920
Directors: Paul Wegener and Carl Boese
The Golem is a silent horror, German Expressionist film about the mythic German-Jewish golem creature that becomes animated by a Jewish rabbi to protect the Jews of ancient Prague, but the golem predictably terrorizes the whole community. 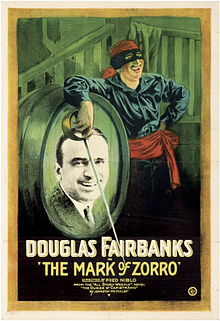 The Mark of Zorro (1920)
Release Date: November 27, 1920
Director: Fred Niblo
Studio: United Artists
The Mark of Zorro stars Douglas Fairbanks “The King of Hollywood” as the unimpressive Don Diego Vega by day, turned acrobatic hero named Zorro by night. It is a fun adventure in old Spanish California, and one of Fairbanks’s signature roles. This is the first movie production of Johnston McCulley’s 1919 story, “The Curse of Capistrano.” The film represents Douglas Fairbanks’s breakthrough role as an action/adventure star.