[Films are listed according to release date. Best Picture Winners are listed first each year]

Sunset Boulevard (1950)
Release Date: August 10, 1950
Director: Billy Wilder
Studio: Warner Bros
Sunset Boulevard is Billy Wilder’s homage to old Hollywood -its triumphs, its decadence, and even its decay. The film is a noir-esque portrait of an aging silent film star who lives in her overgrown mansion, as she hopes to regain the glamor of her silent film career. Numerous actors and directors appear in the film including Gloria Swanson, Erich von Stroheim, Cecil B. DeMille, and even Buster Keaton to name a few. It is one of the greatest achievements of the Golden Age of Hollywood.

Pandora and the Flying Dutchman (1951)

Best Motion Picture (1952): The Greatest Show on Earth (1952)
Release Date: January 10, 1952
Director: Cecil B. DeMille
Studio: Paramount Pictures
The Greatest Show on Earth is widely regarded as one of the worst Best Picture winners of all-time. It is a mostly dull, milquetoast technicolor movie that was a suspiciously odd choice to have won Best Picture in 1952 especially when considering the competition which included films like High Noon and The Quiet Man. It follows The Ringling Bros. and Barnum & Bailey Circus as it travels around the country for the better part of a year. However, even with an all-star cast of Charlton Heston, Jimmy Stewart, Cornel Wilde, Dorothy Lamour, Betty Hutton, and Gloria Grahame, this film does not stand up to scrutiny.

High Noon (1952)
Release Date: July 24, 1952
Director: Alfred Zinnemann
Studio: United Artists
Starring Gary Cooper and Grace Kelly High Noon is about a lawman of a small frontier town in the New Mexico territory who decides to remain in town to battle a notorious outlaw who is expected to arrive on the noon train. No one in town joins in to help him but he decides to remain anyway. The hero is portrayed as complicated and flawed. High Noon is a wonderful Western that won a variety of Academy Awards. It amazingly plays out in nearly precise real-time.

Shane (1953)
Release Date: April 23, 1953
Director: George Stevens
Studio: Paramount Pictures
Shane is an extraordinarily beautiful film with vast sweeping views of the Grand Tetons shot near Jackson Hole, Wyoming. The film is about a lone gunman named Shane (played by Alan Ladd) a mysterious man perhaps even a drifter, who wanders into a humble valley in Wyoming sometime after the Civil War. He discovers a brewing fight between the homesteaders and the cattlemen.

Roman Holiday (1953)
Release Date: August 27, 1953
Director: William Wyler
Studio: Paramount Pictures
Roman Holiday was Audrey Hepburn’s breakout film for which she won an Academy Award for Best Actress. Roman Holiday is a really wonderful little film -innocent, funny, charming, heart-warming. It is one of my favorite Hepburn films. Audrey Hepburn plays Ann, a princess of an unnamed European nation on a goodwill trip to Italy. Frustrated by her endlessly busy schedule she grows angry with her family and runs away into the city of Rome where she meets a dashing young reporter named Joe Bradley (played by Gregory Peck). 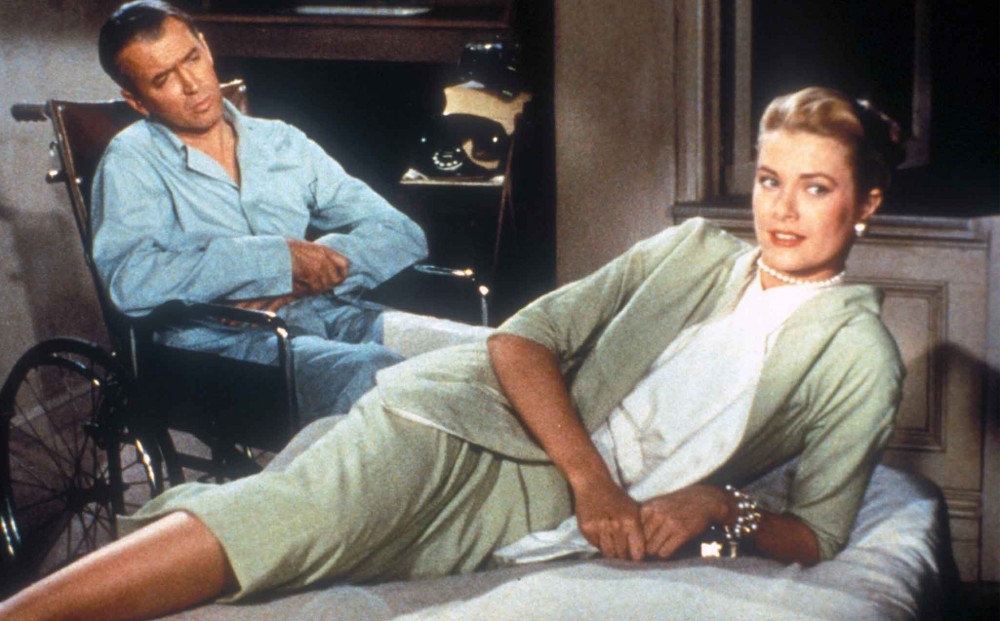 Rear Window (1954)
Release Date: September 1, 1954
Director: Alfred Hitchcock
Studio: Paramount Pictures
Starring Jimmy Stewart and Grace Kelly, Hitchcock’s Rear Window is an amazing picture. The film is brilliantly shot almost exclusively within the confines of one room. L.B. “Jeff” Jeffries (Stewart) is recuperating from an injury when he discovers a murder conspiracy committed by one of his neighbors. The film is a wonderful and thrilling meta-contemplation on the voyeurism of the cinematic art and experience.

To Catch A Thief (1955)
Release Date: August 3, 1955
Director: Alfred Hitchcock
Studio: Paramount Pictures
To Catch A Thief stars Cary Grant as John Robie, also known as “The Cat,” a retired jewel thief living atop a villa along the French Riviera. He is brought out of retirement by an impersonator and along the way he falls in love with a wealthy heiress, played by Grace Kelly, who discovers his secret. It is a delightful, albeit cynical, Hitchcock film.

The Court-Martial of Billy Mitchell (1955)

The Searchers (1956)
Release Date: May 16, 1956
Director: John Ford
Studio: Warner Bros
The Searchers has often been called John Ford’s magnum opus and with good reason. It is a beautiful, expansive, and immensely complex story shot in technicolor and Vista Vision. The sweeping views of the film are incredible -the audience is transported across dusty Texas and Arizona landscapes, including the majestic Monument Valley (John Ford’s favorite shooting location), and since the story takes place across a significant timespan. In addition to incredible scenery, the content of the film is remarkably challenging -Ethan (John Wayne) and Martin (Jeffrey Hunter) chase down a band of Comanche Indians who have kidnapped two girls. The central issue at heart in the film is the moral ambiguity within Ethan.

Invasion of the Body Snatchers (1956)

Best Motion Picture (1957): The Bridge on the River Kwai (1957)
Release Date: October 2, 1957
Director: David Lean
Studio: Columbia Pictures
The Bridge on the River Kwai is a classic film about a group of British and American POWs in a Japanese intermittent in Burma during World War II. The central tensions revolves around various several perspectives on building a bridge over the Kwai River. It explores questions of loyalty, duty, and honor. It won Best Picture, Best Director (David Lean), and Best Actor (Alec Guinness).

12 Angry Men (1957)
Release Date: April 10, 1957
Director: Sidney Lumet
Studio: United Artists
12 Angry Men is a wonderful and compelling courtroom drama -almost the entirety of the film was shot inside a courtroom while a jury deliberates. All of the characters addressed by their jury numbers rather than their names. 12 Angry Men uniquely explores notions of groupthink and consensus-building as well as the nature of reasonable doubt in our justice system. The film features an all-star cast of some of the greatest actors of the 1950s and 1960s.

Touch of Evil (1958)
Release Date: April 23, 1958
Director: Orson Welles
Studio: Universal-International
Orson Welles wrote, starred, and directed this famous film noir (that was, again, sadly revised by Universal and Welles’s original cut is now lost). The film includes other famous cast members, as well, such as Charlton Heston and Marlene Dietrich. It takes place along the U.S.-Mexico border. In a famous single shot opening scene, considered one of the greatest in cinematic history, someone plants an explosive in the back of a car that blows up a short distance away across the U.S. border. Mike Vargas, a Mexican police officer (Heston), investigates and quickly uncovers a complicated plot and cover-up.

The Big Country (1958)
Release Date: August 13, 1958
Director: William Wyler
Studio: United Artists
This grand western film boasts an all-star cast of Charlton Heston, Gregory Peck, Jean Simons, Carroll Baker, and Burl Ives (who won an Academy Award for Best Supporting Actor and also a Golden Globe). It tells the story of James McKay a successful Navy sea captain who goes to visit his girlfriend Patricia in the American West on her father’s large ranch house. McKay quickly becomes the moderator in the midst of a long rivalry between families, as Patricia’s father disapproves of him.

The Old Man and the Sea (1958)
Release Date: October 7, 1958
Director: John Sturges
Studio: Warner Bros.
The film version of Hemingway’s classic Pulitzer Prize-winning novella offers a surprisingly engaging take on the story. The film was directed by John Sturges, famous for other movies like Gunfight at the O.K. Corral (1957) and The Magnificent Seven (1960). Spencer Tracy stars as the old man (or “Santiago” in the novel) -he was nominated for an Oscar. for Best Actor.