Star Wars Episode V: The Empire Strikes Back (1980)
Director: Irvin Kershner. Surely, Empire is one of the greatest sequels ever created, on par with The Godfather, Part II. It is a brilliantly dark sequel in which Luke Skywalker begins his training with Master Yoda, but grows impatient to face his nemesis Darth Vader, only to prove that his powers are not yet ready. Meanwhile, Han Solo and his compatriots fly to the cloud city at Bespin only to be betrayed and fall into the hands of the empire. The film ends with a disturbing revelation: Darth Vader is Luke Skywalker’s father, and the Rebel Alliance is on the verge of total destruction.

The Shining (1980)
Director: Stanley Kubrick. Kubrick’s The Shining is one of the greatest cinematic horror achievements of all time. Kubrick notably entirely disregarded Stephen King’s novel and screenplay, much to the original author’s chagrin. The plot is simple, yet the film lasts over two hours, indicating the slow pace of the tension as the family’s descends into chaos. In the film, a family moves into the frozen and echoingly silent hotel, “The Overlook” in remote Colorado. Gradually they descend into madness, hallucinations, and murder.

An American Werewolf in London (1981) 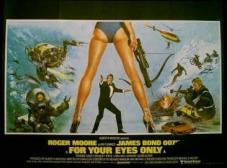 James Bond #12: For Your Eyes Only (1981)
Director: John Glen. For Your Eyes Only has often earned itself a reputation as one of the less goofy Roger Moore Bond films. It is the twelfth James Bond film, and the fifth starring Roger Moore. The film has an odd opening in which Bond kills what seems to be Blofeld. The rest of the plot is about a Soviet plot to acquire a device called a Automatic-Targeting-Attack-Communicator (ATAC) which controls the Royal British fleet of submarines. 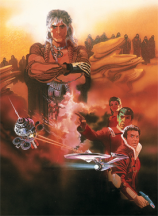 Star Trek #2: Star Trek – The Wrath of Khan (1982)
Release Date: June 4, 1982
Director: Nicholas Meyer
Studio: Paramount Pictures
Star Trek: The Wrath of Khan is the greatest of the Star Trek films. The Wrath of Khan is a terrific yet challenging film. It forces the audience to question the true heroism and infallibility of Star Trek’s central protagonist, Captain Kirk (reprised by William Shatner). A top secret mission looking to create a life-creating Genesis project stumbles onto a group of exiled genetically engineered led by Khan, a former rival of Kirk from the Star Trek series. Captain Kirk (now Admiral Kirk) retakes the helm of the Enterprise to defeat his old nemesis. The film ends in a tragic death.

James Bond #13: Octopussy (1983)
Release Date: June 6, 1983
Director: John Glen
Studio: Eon/United Artists
Octopussy is the sixth film to star Roger Moore as James Bond. It is a predictably silly and slapstick late Cold War adventure that finds Bond chasing jewel smugglers and Faberge eggs in East Berlin while dressed as a circus clown. It is a mostly forgettable movie, but there was an interesting controversy in the background of the production of Octopussy. Sean Connery had signed on to reprise his role as James Bond in the non-Eon film Never Say Never Again, much to Albert “Cubby” Broccoli’s chagrin. The two films locked horns in competition for revenue, but ultimately Eon’s Octopussy ($187.5M) beat out Warner Bros.’s Never Say Never Again ($160M).

Star Wars Episode VI: Return of the Jedi (1983)
Director: Richard Marquand. The third and final installment of the original Star Wars trilogy. The Empire is rebuilding its massive Death Star that was destroyed in the first film (episode IV). Luke Skywalker returns as a more confident Jedi trained by Master Yoda. He and his compatriots rescue Han Solo, Luke faces his father, and just when all hope is lost, Vader destroys the Emperor, his master, and helps the Rebel Alliance prevent the Empire from rising again. The brilliant conclusion takes us from the desert planet of Tatooine, to the swamps of Dagobah, and the forests of Endor.

Best Picture (1984): Amadeus (1984)
Director: Miloš Forman. Amadeus has been a long-time favorite. The film was adapted from the stage play of the same name. The film tells the story of a fictional conspiracy theory in which an envious Italian composer named Antonio Salieri tries to end the life and career of Wolfgang Amadeus Mozart, a brilliant young composer who has taken Vienna by storm.

James Bond #14: A View To A Kill (1985)
Release Date: May 22, 1985
Director: John Glen
Studio: Eon/United Artists
A View To A Kill is the last Bond film to star Roger Moore. Throughout the film we become painfully aware that Roger Moore is far too old to continue playing the role of James Bond. The plot follows Zorin, a rogue microchip businessman (played by Christopher Walken) as he develops a plot to detonate bombs along the Hayward and San Andreas faults in an effort to destroy Silicon Valley. It is a wholly forgettable movie. 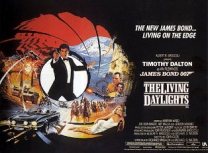 James Bond #15: The Living Daylights (1987)
Release Date: June 29, 1987
Director: John Glen
Studio: Eon United Artists
The Living Daylights is the fifteenth canonical James Bond film. It is the first of two Bond movies to star Timothy Dalton as Agent 007, following the departure of an aging Roger Moore. The Living Daylights offers a welcome change of pace – a return to Cold War espionage. The plot follows Bond in pursuit of a KGB general when he uncovers a diamond scheme and even joins the side of the Mujahideen in a dated scene for the film, and in the end he wins out over the Russians. It is an entertaining ride. The Living Daylights is not the worst Bond film, but certainly not the best.

The Naked Gun (1988)
Release Date: December 2, 1988
Director: David Zucker
Studio: Paramount Pictures
The Naked Gun is a hilarious crime comedy spoof told as a goofy film-noir satire. It was based on a television show entitled “Police Squad!” that was cancelled after a mere six episodes. This laugh riot-inducing film stars Leslie Nielsen as Police Lieutenant Frank Drebin, a dim-witted officer who uncovers an assassination attempt against Queen Elizabeth II while he is coupled with Priscilla Presley and a slough of other actors, including O.J. Simpson, George Kennedy, and Weird Al Yankovic to name a few. The sequels are also very funny movies.

The Unbearable Lightness of Being (1988)

James Bond #16: License To Kill (1989)
Release Date: June 13, 1989
Director: John Glen
Studio: Eon/MGM/United Artists
Licence To Kill is a significantly darker film in contrast to the Roger Moore era. It is the second and final Bond film to star Timothy Dalton. While the movie leaves something to be desired (and it was one of the lowest grossing Bond movies), Dalton delivers a welcome performance as a ruthless assassin, which is closer to what Ian Fleming initially had in mind for the character. The plot follows Bond seeking vengeance for a personal vendetta against an international drug dealer named Sanchez, who has viciously attacked Bond’s CIA counterpart, Felix Leiter, and his new bride.