Sergei Eisenstein’s Battleship Potemkin is one of the best propaganda films of all time. After the success of Strike (1925), which glamorously depicted striking Russian workers in 1903, the Soviet government commissioned Eisenstein to commemorate the Soviet uprising of 1905 as well. Eisenstein used this opportunity as a testing ground for his new theories of motion picture “montage.” The film was a shock around the world, for its graphic depictions of violence, eliciting an intense emotional response from audiences. Joseph Goebbels, Propaganda Minister for the Nazis, called the film a “marvelous film without equal in the cinema… anyone who had no firm political conviction could become a Bolshevik after seeing the film.” The famous scene at the end of the film depicts a massacre on the steps of Odessa, even though this event never actually occurred. It has since become one of the most iconic scenes in the history of cinema for its experimental use of montage. Despite being a silent film, in order to retain its vivacity, Eisenstein hoped the score could be rewritten every 20 years.

Though it is a blatant piece of Soviet propaganda, Battleship Potemkin is one of the greatest films of the 1920s and is quite possibly the Soviet Union’s greatest silent film, along with Vertov’s experimental Man With Movie Camera. Battleship Potemkin is an incredible film that employs new theories of montage in order to build tension and create a moving visual panorama culminating in a dramatic crescendo.

The film premiered at the Bolshoi Theatre in December 1925 and was released in Moscow in January 1926. Propaganda posters touted the film as “the pride of Soviet cinema” with over 300,000 admissions in the first three weeks.

ACT I: People and Worms

The setting is June 1905. Two sailors, Matyushenko and Vakulinchuk, are taken in by the revolutionary spirit against the Tsarist regime unfolding across Russia. A clumsy officer beats a sailor for accidentally tripping over him. This causes Vakulincheck to rally the crew in support of a revolution.

The next morning, the crew complains about the food –the meat is covered in worms. The captain comes to inspect the meat but the captain says they are maggots and should just be washed off prior to eating. The sailors refuse to eat it, and instead they simply eat bread and water. One sailor, while cleaning the mess hall, reads an inscription on a plate: “give us this day our daily bread.”

ACT II: Drama on the Deck

The men who refused to eat the meat are brought to the front of the deck and are given their last rights by an Eastern Orthodox clergyman. A blanket is thrown over them and the First Officer orders a firing squad against the men. But at the last second, with the suspense building, another sailor reminds them of their brothers. This spurs the revolution onward and the sailors attack the officers and kill them. Next they slaughter the ship’s priest and throw the doctor into the ocean.

The mutiny is a success, despite the death of its leader Vakulincuk. The Potemkin arrives at Odessa and Vakulincuk’s body is put on display along the shoreline to remind the people of the evils of the Tsarist regime. A sign on his shirt reads: “Dead for a spoonful of soup.” The people of Odessa gently and peacefully welcome the rebellious Potemkin as it waves a giant red flag, colored onto the film for effect. 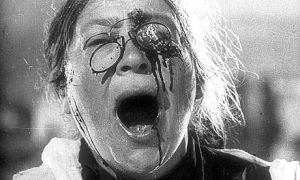 The Cossacks of the Tsar retaliate and march on the unarmed crowds. They gun down defenseless men, women, and children in one of the most brutally famous and recreated scenes in cinematic history. The soldiers are portrayed as inflexible, operating as one unit. The audience only ever sees their boots marching in perfect rhythm, but the crowd of citizens fall to their deaths in all manner of diverse and uncomfortable ways. The sailors on the Potemkin receive word that a Tsarist fleet is headed for the harbor to quell the rebellion.

ACT V: One Against All