In 1917-1918, Charlie Chaplin was seeking more independence and greater creative license over his films which he believed were becoming too stagnant and predictable. His relationship with Mutual ended amicably, and he signed an eight-film contract with First National. His years with First National would prove to be some of the most important in his career. Both Chaplin’s and Mary Pickford’s contracts with First National were the first million dollar contracts in cinematic history. With his newfound riches, Chaplin built his own studio on five acres along Sunset Boulevard, completed in January 1918. He also built an incredible California Spanish-style home in Beverly Hills, a home which has been occupied by numerous other famous Hollywood actors over the years.

His first film, A Dog’s Life was released in 1918 and is one of his most extraordinary early short films, showing superior qualities than his earlier films. He then released a couple propaganda films to encourage the sale of war bonds, as World War I had begun (Chaplin had also received criticism for not enlisting in the war, though he was fully prepared to be drafted if needed). He also released his first full feature-length film, The Kid, a beautiful and melodramatic, partly autobiographical film of youth. It was also, in part, inspired as a result of his failing marriage to Mildred Harris, and their child that died in infancy. In this period, Chaplin’s Tramp character met its pinnacle. 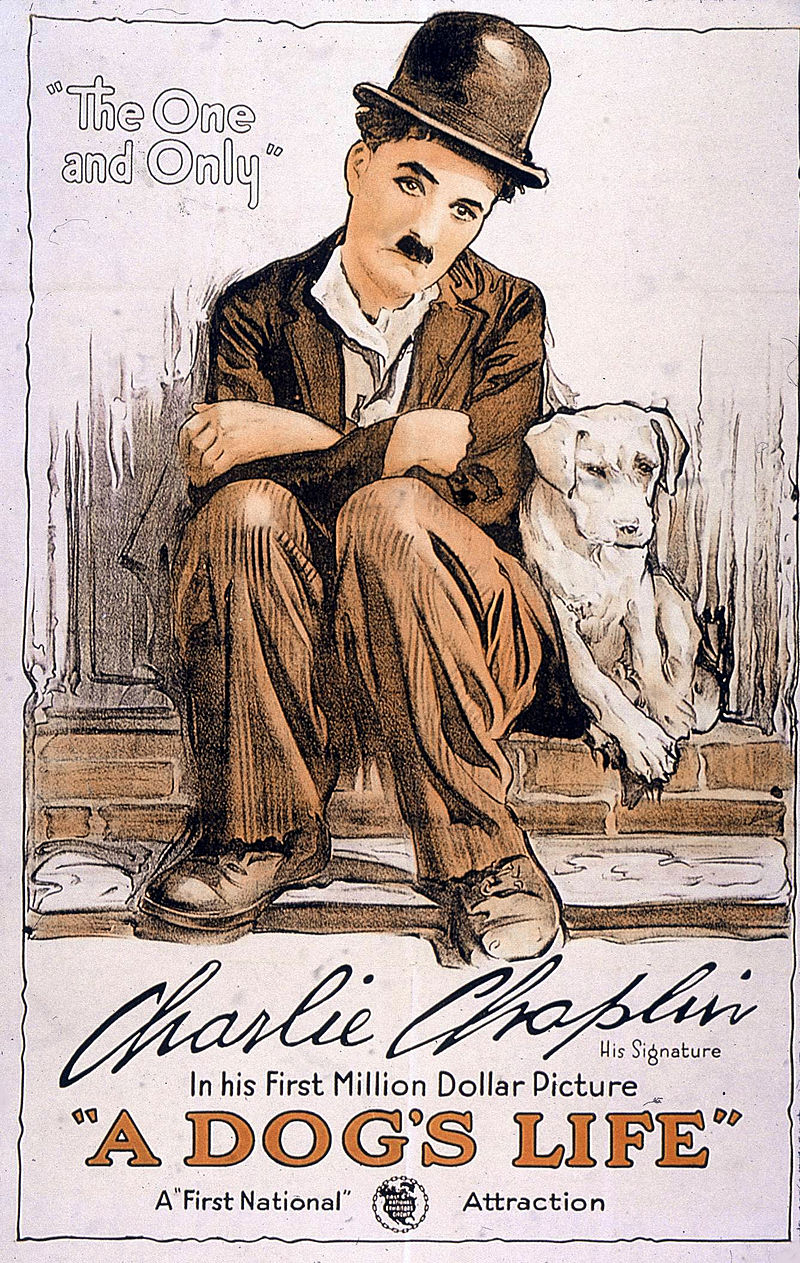 Also during this period, Chaplin created United Artists, a joint company between fellow artists, Mary Pickford, Douglas Fairbanks, and D.W. Griffith. He attempted a buyout of his contract with First National to focus on his own productions through United Artists, but the deal was declined and First National requested he finish producing his eight films. Here is a short selection of his First National films that I watched:

#1 A Dog’s Life (1918)
The Tramp playfully toys with police officers on the street before looking for a job and eventually rescuing a stray dog. He goes into a cabaret where dogs are not allowed bringing the dog with him, his wagging tail sticking out of his backside. He meets a sad girl and tries to make her laugh, before he is kicked out of the cabaret. His dog discovers a wallet that has been hidden by thieves outside. The thieves discover the Tramp and his dog with the wallet and this leads to a chase scene across town. Eventually the thieves are arrested, and the Tramp uses the money to purchase a farm for himself and the girl. The film ends as they look into a cradle as newlyweds (inside are puppies). A Dog’s Life is surely one of the best of Chaplin’s early short films.

#3 Sunnyside (1919)  (Note: The Bond is a film made and funded entirely by Chaplin, thus Sunnyside is the third film made for First National, not the fourth).
The film takes place in the beautiful rural village of Sunnyside. The Tramp works as a farmhand at the Evergreen Hotel. His boss is the angry pastor. He ironically sits under a sign reading “Love Thy Neighbor” as he yells at the Tramp. He makes all manner of faux pas, including accidentally letting a cow into the church of Sunnyside. He goes to visit his love-interest. He has a notable dream with a group of nymphettes. He tries to imitate a wealthy gentleman from the city in order to win his love-interest’s heart, he looks on from a window and sadly feels he is losing her heart. He is mocked for dressing so oddly in attempted imitation. The films ends ambiguously as he appears to stand waiting for a car to hit him -the film suddenly flashes to an image of the Tramp chasing away the wealthy gentleman and he embraces his lover at the end. It is a questionably “sunnyside” ending, but nevertheless an amazing and beautiful Chaplin short film.

#4 A Day’s Pleasure (1919)
A Day’s Pleasure is a very funny short Chaplin film, shot very quickly. It portrays the Tramp and his family of four as they go out for a day – the slapstick gags begin as soon as they leave the house in their rocky automobile, then they board a boat that causes everyone seasickness, and on the return trip home the Tramp gets into a squabble with a traffic police officer. Edna Purviance, frequent collaborator and one of Chaplin’s romance interests, plays his wife (she co-starred with Chaplin in over 30 of his films). Jackie Coogan, the famous co-star of Chaplin’s The Kid, plays one of the children in A Days Pleasure (1919).

#6 Pay Day (1922)
This short film has a series of gags involving the Tramp working as a day-laborer at a construction site. He fights for his fair wage, after doing some incorrect math. His shrew of a wife takes all of his money, but he prefers to go out drinking, He gets back home just in the nick of time, to pretend he has to return to work. This was the last of his two-reel films.