In contrast to the bold, triumphant, and defined political works of earlier European painters, like Eugene Delacroix for example, the Impressionists were a more muted, subtle group of less defined painters, at least conventional wisdom instructs us so. The Impressionists give us only a glimpse of something, a passing blurred picture of motion; like a fading sunset over the ocean, people gathering in the park from a distance, couples sitting in a Parisian care, and so on. Some have even gone as far as to suggest that Impressionism is a kind of Hegelian reaction against emerging technologies, like photography, as well as the prevailing artistic establishment, like so-called “realism.” Perhaps to reduce Impressionists to mere reactionary impulses does a disservice to the movement. Perhaps not. Many of the works of Impressionism were accused of being unfinished, incomplete fragments, and as a result the movement garnered a reputation as a kind of iconoclastic movement. The story of Impressionism is the story of rebellion against conventional more, and in that way it is appealing to modern sensibilities -David will always be preferred to Goliath. At the same time, Impressionism appeals to the high class taste for leisure, as well as the low class desire for representation, to be seen and heard, with portrayals of peasants, immigrants, and working people. Uniquely, the Impressionists are also autobiographical. Their paintings tell the painter’s stories.

Impressionism took hold at a time when painting was re-emerging from its cave. According to the classical tradition, painters piled into studios and hired models to sit for them, but gradually the en plen-air movement took root. In Italy painters like Macchiaioli began painting outside, and in the United States Winslow Homer took their artwork outside and launched a new plein-air painting movement. In France, four young painters who studied classical art together began wandering out into the countryside to paint in their own style. They were inspired, in part, by the light brushstrokes of their forefather, Édouard Manet (1832-1883), the “Father of Modernism.” 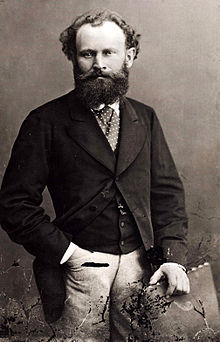 Manet was born into a wealthy French family, but after rejecting a legal career and twice failing the naval exam, Manet’s father reluctantly allowed him to pursue a career in art. Manet’s early work matched the formulaic style of the time, copying the great works of the Louvre, however he began to turn his focus away from religious and allegorical imagery, to simple depictions of leisurely scenes in everyday life, such as cafes, parks, and so on. As his perspective shifted, he lost admirers from the French establishment, and gained friends among more rebellious corners of Paris, like Charles Baudelaire and Émile Zola, Manet’s strident defender. As such, Manet became friends with the young group of “Impressionists” when he led their now famous group discussions at the Café Guerbois, but he later distanced himself from the group as he preferred to display his works at the Salon, an establishment art showcase. Additionally, Manet preferred the use of black lines and dark colors, which many other Impressionists rejected. Despite being lambasted in the press for his early “shock-pieces”, Manet claimed to have no intention of upending traditional methods of painting. He was married in 1863 to his piano teacher and longtime lover, Suzanne Leenhoff. He continued to paint into later life, making money from his popular still-life pieces, until he suffered from what is likely syphilis. His left foot was amputated as a result, and he died eleven days later in 1883.

Here are some of Édouard Manet’s notable works:

In 1863, he created two highly controversial works that departed from his earlier, more conventional works, based on his classical training and copies of the masters in the Louvre- 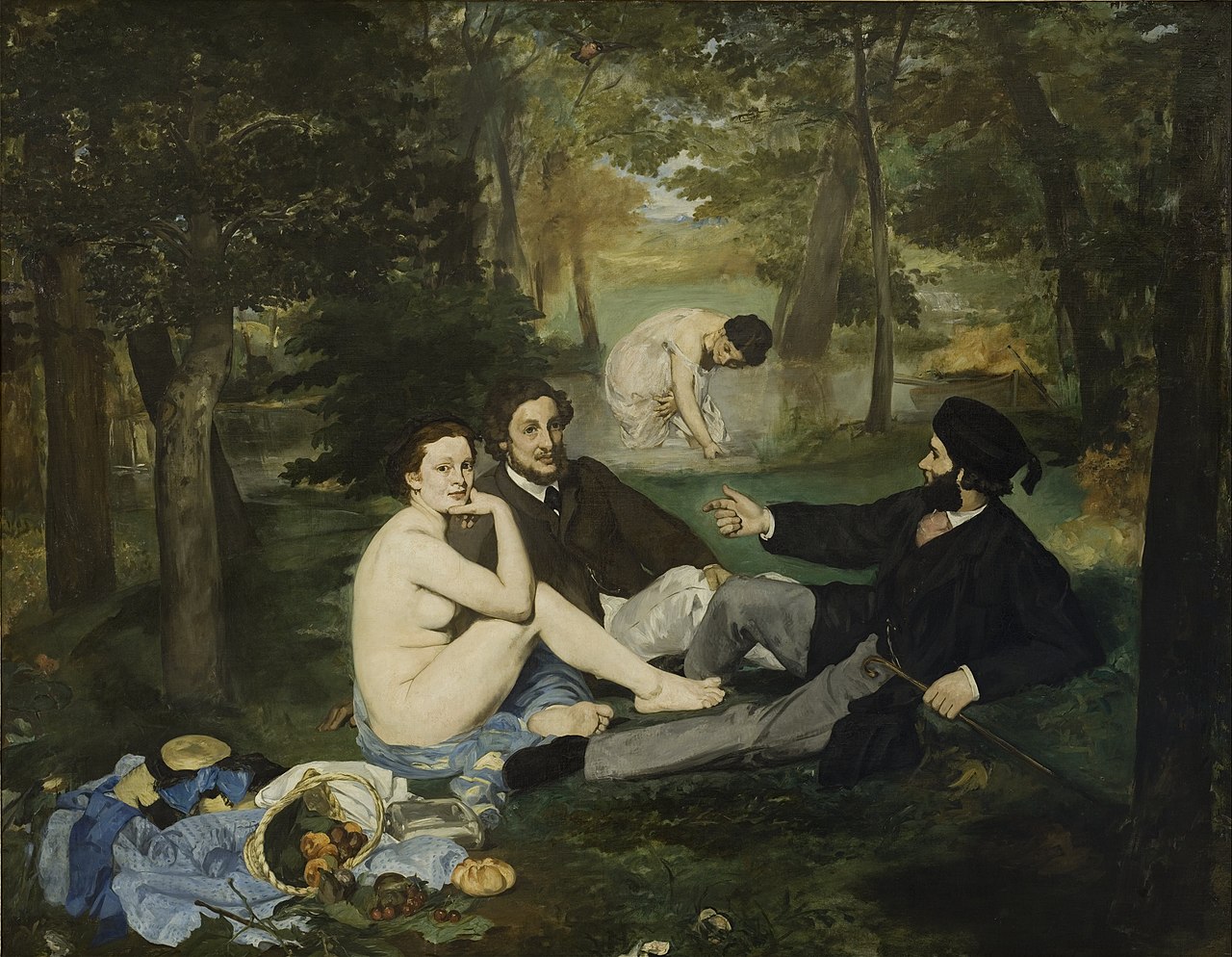 Playing on classical motifs and 16th century Italian works by Raphael and Titian, Manet conveys a nude woman. She is scandalously positioned not in a mythological context, but rather in a casual encounter, perhaps a common picnic scenario. She is an ordinary woman in an ordinary situation.In the large-scale “The Luncheon on the Grass” painting, a nude woman sits while having a picnic with two fully clothed men in a dark forest. She has just bathed in the stream. In the background, a semi-nude woman is bathing in a stream. She almost appears as if painted onto a large backdrop. Her size is confusing. A boat sits upstream from her. The painting is a kind of parody of a pastoral scene, with a goddess and a water nymph. Note the lighting distinction in the foreground: the painting gets darker as it gets closer to the viewer, while the nude woman is blindingly bright. A still-life scene of fruit sits beside the nude woman. She stares at the viewer while her two compatriots converse with each other. They seem not be concerned with the two nude women. The scene gives the appearance of being staged, as evidenced by the unusual hat worn by the gentleman on the right, a hat typically worn indoors. The painting is notable for being so large, a size traditionally reserved for classical or religious imagery. It caused a sensational outcry upon its release and today it is likely Manet’s most famous work.

“The Luncheon on the Grass” was rejected for display at the Paris Salon, along with more than half the other works submitted in the year 1863, thus prompting Emperor Napoleon III to create the Salon des Refusés, an alternative Salon for rejected painters to display their work. Manet chose to do so at the ‘Salon of the Refused’. 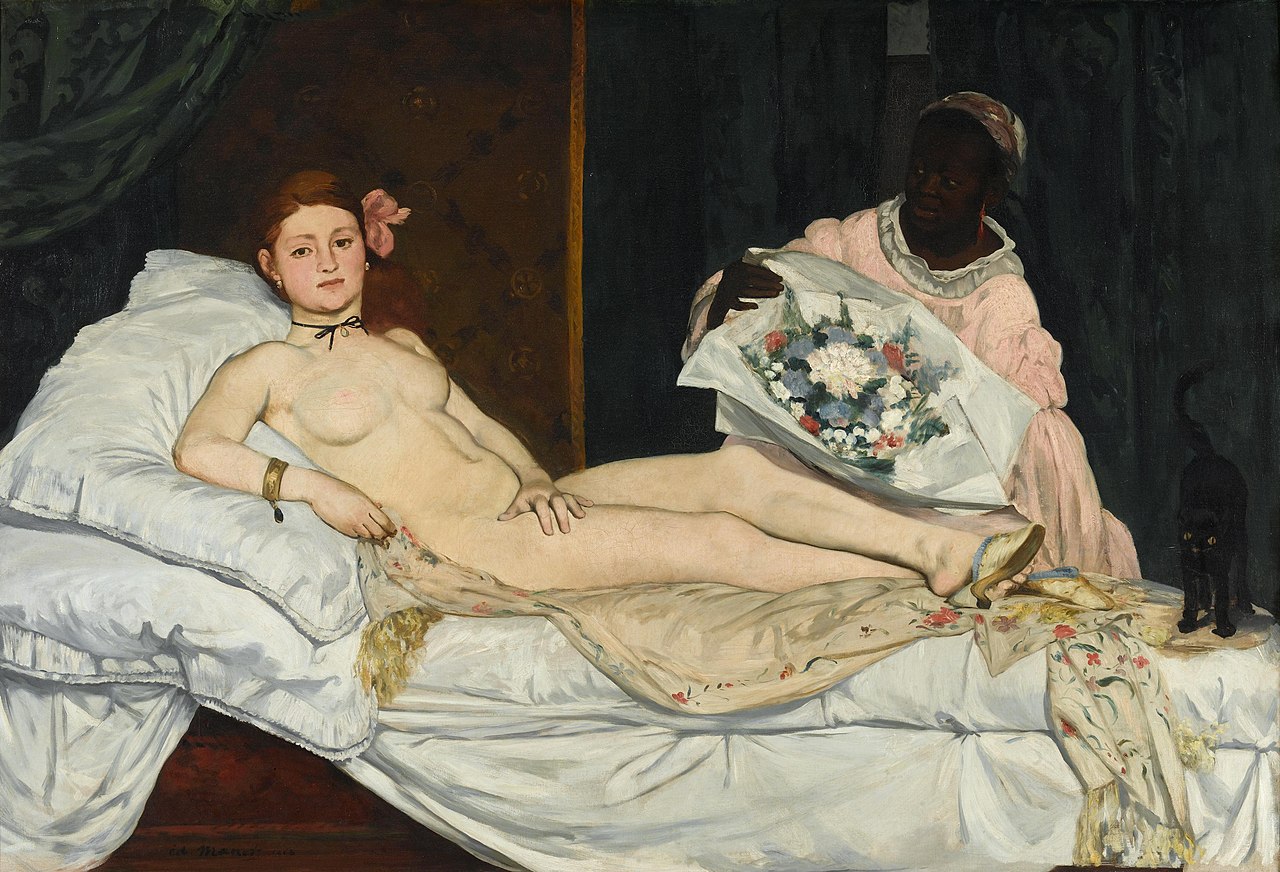 Again, reframing Titian’s Renaissance work, Manet was challenged to provide the Paris Salon with a nude work. He scandalously chose to convey a confidently posed prostitute, poised as an aristocrat but with a flower in her hair, a bracelet, and sandals (she is wearing one and the other is off). She is relaxed but confident, and clearly posing. She gazes directly at the viewer as if to court the audience, yet she covers her pubic region. She lays upon her white bed with a blanket or robe underneath. She is the modern Venus, a woman you might see walking down the street, but also with the capability to entice. A black servant-maid is interrupting the photographically-staged moment to deliver flowers from an admirer. The flower-delivery is the action of the painting. A black cat rises in the lower right as if suddenly scared. Olympia was a common colloquial name in reference to a prostitute in France.

Olympia was accepted to the Paris Salon in 1865 amidst great outrage. Not surprising, considering the history of the Salon – a series of scandals for the upper class and fraught with infighting. Crowds came to the Salon merely to gawk and jeer at the Olympia, while it was comically reproduced and lambasted in the press.

Note the similarities to Titian’s Venus d’Urbino painted between 1532-1534: 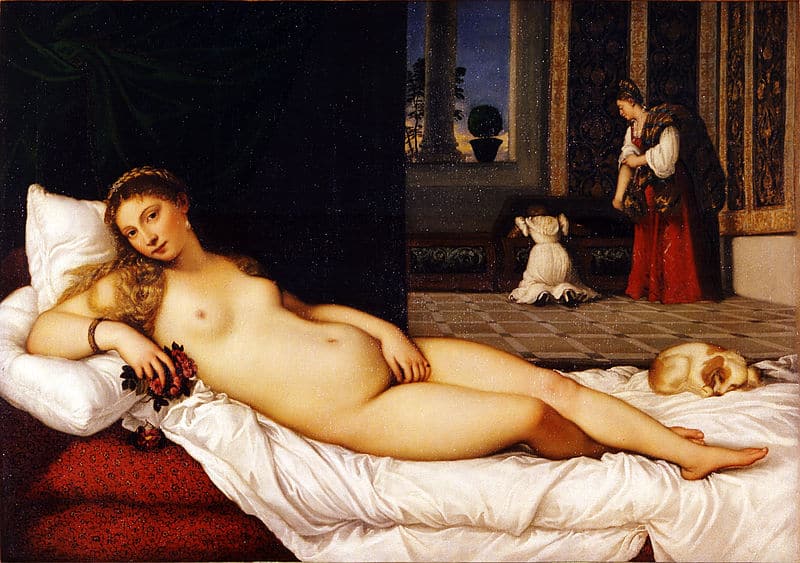 At any rate, not many of Manet’s later works rocked the French art establishment in quite the same way that his early pieces did. He developed something of a minor reputation for painting ordinary people, and outsiders, as evidenced below: 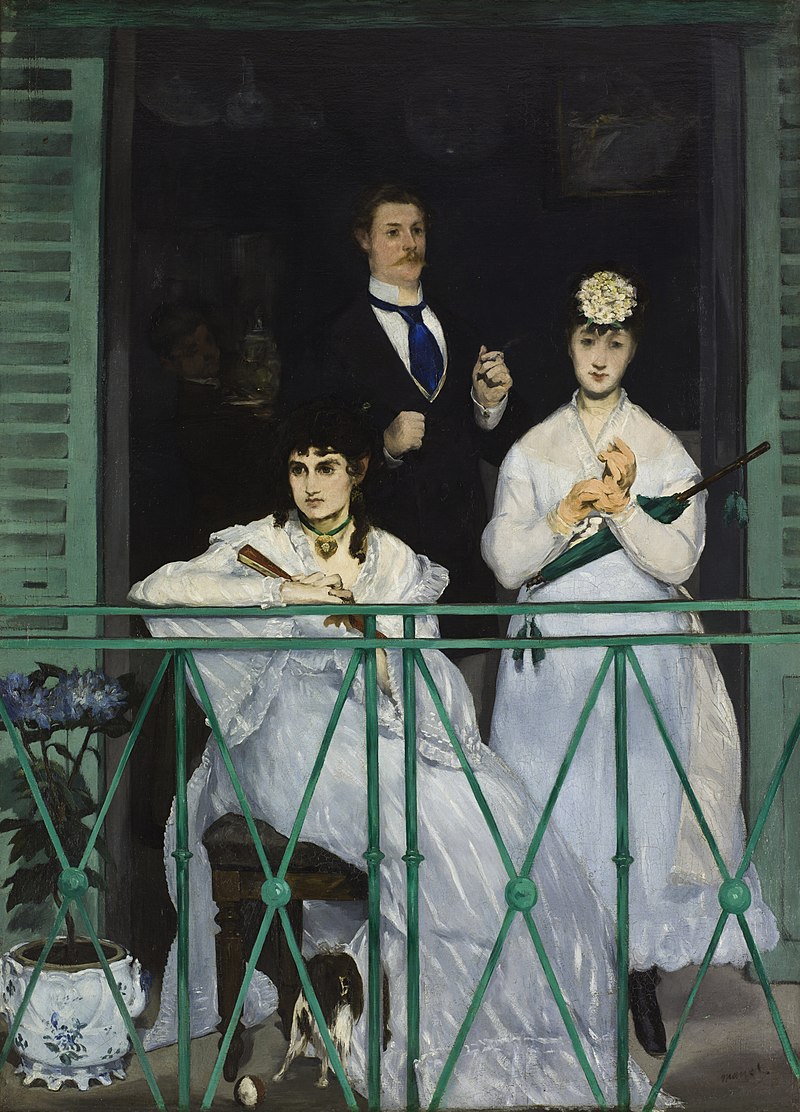 Manet was also keen to paint his close friends. “The Balcony” borrows heavily from Francisco Goya. The setting is an outdoor balcony. It features prominently Berthe Morisot, an Impressionist painter and friend of Manet. She married Manet’s brother and in the painting she sits, silently and heroically looking at the activity below. Morisot was featured in many other Manet paintings. Also featured are Fanny Claus, a violinist who gazes directly at the viewer, and painter Antoine Guillemet. A blurry figure in the background is likely Manet’s son. Also depicted is a small dog and a hydrangea plant. Le Balcon was not particularly well received by the establishment.

Emile Zola, the boyhood friend of Cézanne, was also one of the most ardent defenders of Manet in his rebellion against prevailing French aristocratic art sensibilities. He once prophesied that Manet would hang in the Louvre, a true prognostication. In his portrait above, Zola sits with his writing in front of small copies of Manet’s Olympia, along with Velazquez’s Bacchus, as well as some Japanese art – a culture which had a significant influence on the Impressionists.

The Execution of Emperor Maximilian (1868)

This painting was obviously completed in heavy tribute to Goya’s The Third of May 1808 (1814) as pictured below. Manet’s piece is part of a series of five pieces depicting the second emperor of Mexico when Napoleon’s empire briefly ruled over Mexico. However, he pulled French troops out of Mexico in 1866, and shortly thereafter Mexican opposition forces captured Maximilian and executed him by firing squad. The news shocked French audiences. 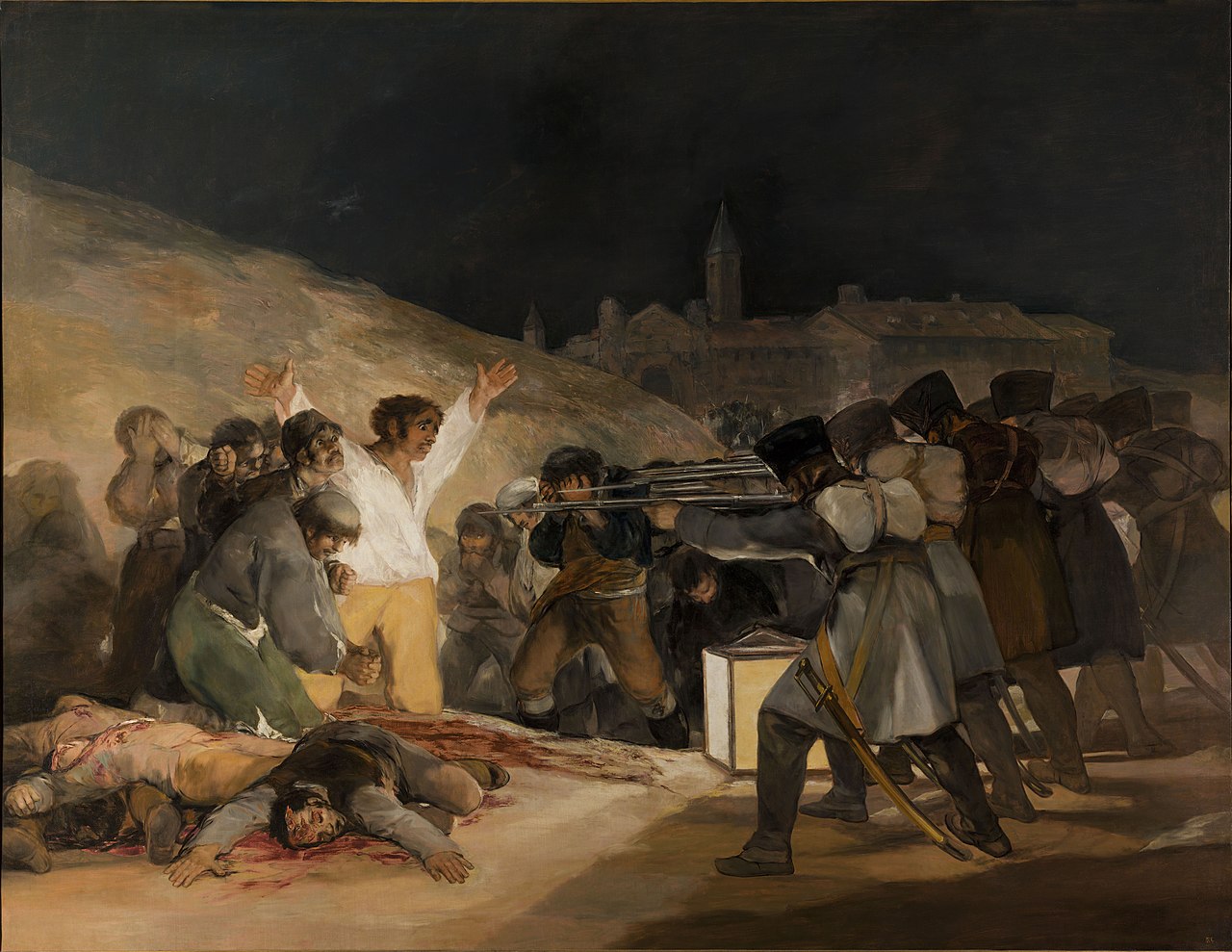 The Monet Family in Their Garden at Argenteuil (1874)

While Manet and Monet had a rocky relationship early on, with Manet believing Monet had copied his style, they eventually grew to develop a friendship. During the summer of 1874 Manet vacationed at his family’s home in Gennevilliers, across the Seine from Monet at Argenteuil. They spent a great deal of time together and were occasionally joined by Renoir. While Manet was painting this picture of the Monet family in their garden, Renoir arrived and also painted the same scene right beside Manet (pictured below).

Madame Monet and Her Son (1874) By: Auguste Renoir 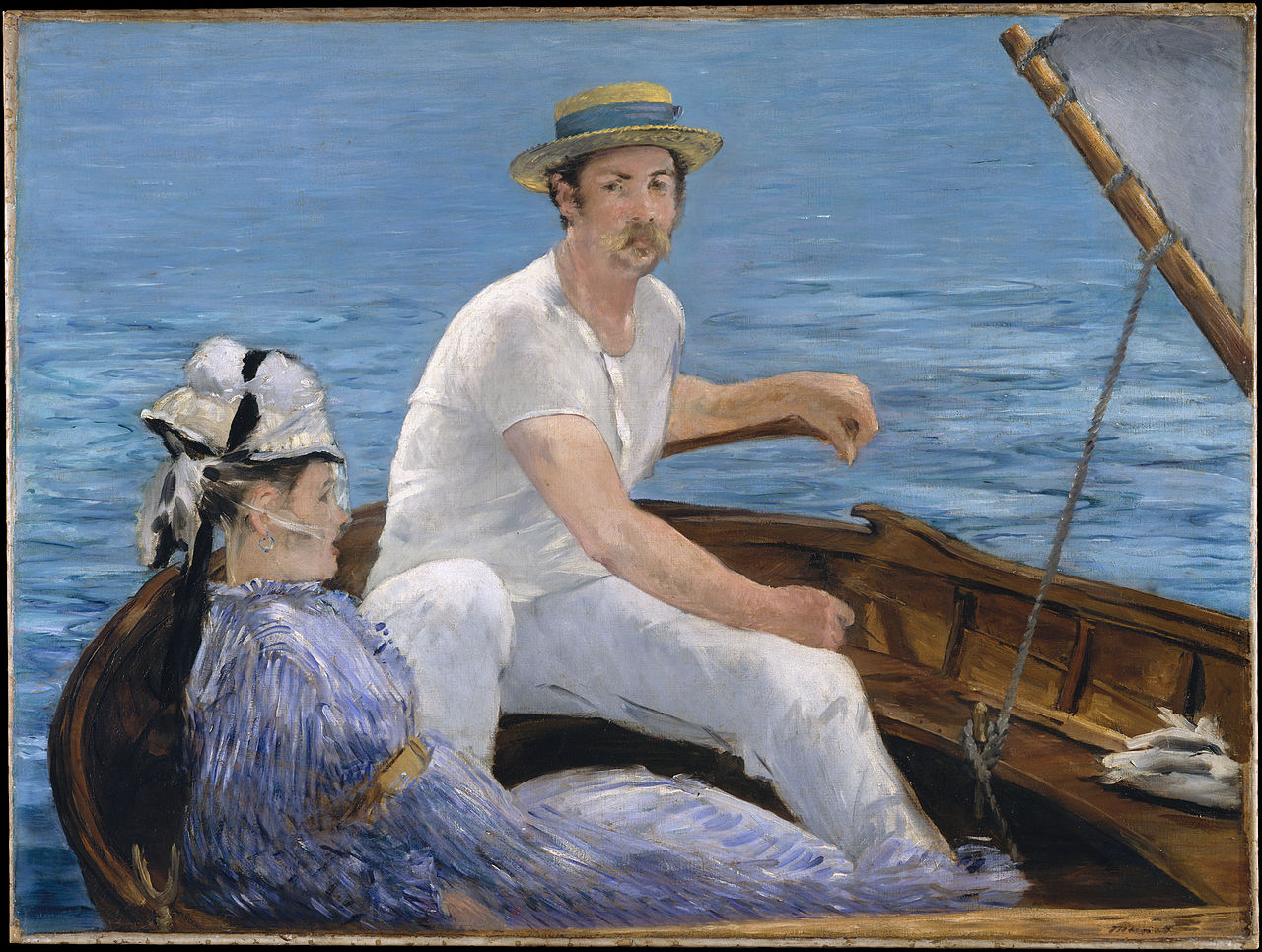 Boating was also painted during the summer of 1874 when he spent a great deal of time with Monet and Renoir. The male character may be Manet’s brother-in-law.

After the disastrous Franco-Prussian War, the urban streets of Paris were decorated to celebrate the occasion. Notice, a crippled man on crutches hobbling down the rue, followed by a man with a ladder. Perhaps he is placing more French flags above the street. Up ahead are some carriages of wealthy people out for the day, celebrating French patriotism. 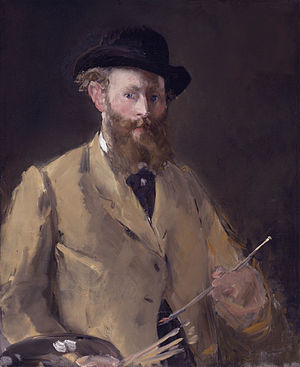 A late work of Manet, one of two self-portraits. He is notably dressed in fashionable attire, something not typically worn by an artist while painting, and the image is mirrored as Manet was assuredly not left-handed. The painting is inspired by Diego Velázquez’s famous stylized self-portrait. 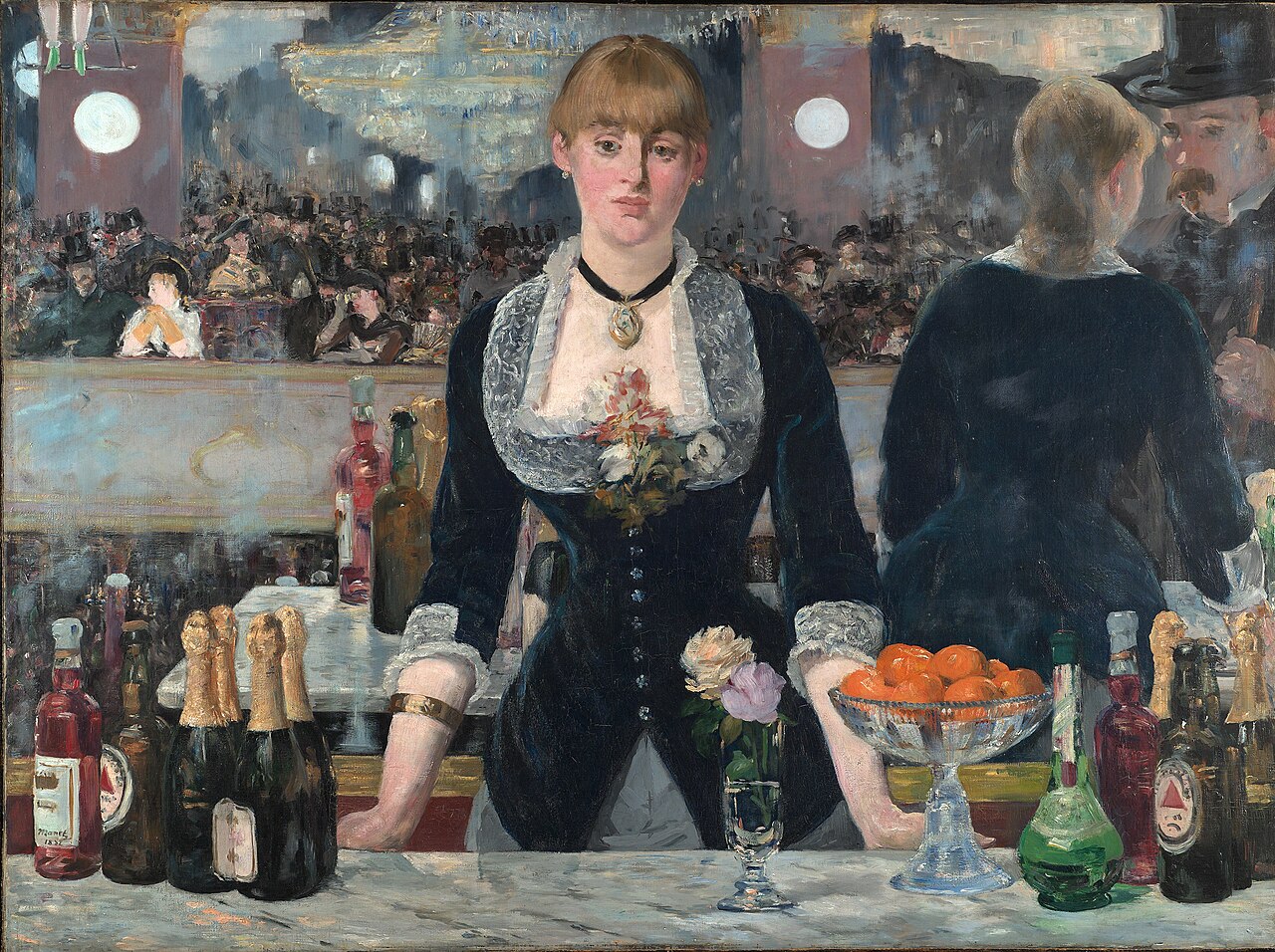 Manet’s last major work was this eccentric bar scene, set in a popular nightclub in Paris. It was exhibited at the Salon in 1882. The scene is the Folies-Bergère bar and nightclub in Paris. A real woman, Suzon a bar-maid, is the subject. She stands in the foreground, staring at the viewer, as if to ask: “what would you like?” She seems forlorn and detached. She is a worker amidst a sea of lavish entertainment. She stands in front of a large wall-length mirror behind the bar. A confusing optical illusion takes place as a gentleman in a top hat appears to be talking to her, however he is actually standing to the left of the viewer, gazing straight ahead. Her off-center reflection to the right is jarring to the viewer, confusing our perspective in an already morally ambiguous modern world. In addition, we do not see our reflection in the mirror, or maybe we do not see ourselves in this world, though Manet seems to orient us as consumers. In front of Suzon is a bright bowl of oranges, flowers in a cup, and a variety of alcoholic beverages on a marble countertop. The beverages are all commodities and invite comparison to Suzon -to what extent has she too become a commodity? In the reflected background is a large, blurred crowd of nightclub attendees enjoying a raucous evening. Above them a pair of feet dangle –the feet of an acrobatic trapeze artist dancing over them. Questions abound regarding this obscure painting, and everyone from Michel Foucault to Guy de Maupassant has endeavored to decipher its mysterious code.

Manet’s later life was focused on painting upper echelon female portraits as well as still-life paintings to supply the market demand. His financial security came from his mainly unremarkable still-life pieces, always a popular form of painting, but his reputation was always staked on his high drama, larger than life early pieces. He is sometimes referred to as the bridge between “realism” and “modernism.”