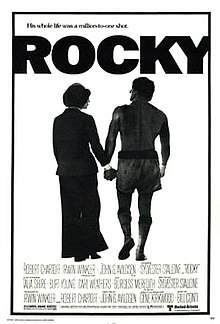 Somehow Rocky won both the awards for Best Picture and Best Director in 1976, contra All The President’s Men (a vastly superior film in my view). Rocky was a low budget movie, based on the idea written by Sylvester Stallone. He wrote the script in three and half days after watching a Muhammad Ali fight. Much like the plot, the film had a unique rise from obscurity to become one of the more recognizable sports films of all time.

Sylvester Stallone (an unknown actor at the time) plays a downtrodden unlucky, working-class stiff from the streets of Philadelphia. He moonlights as a boxer, the “Italian Stallion,” while working during the days as the muscle for a crime syndicate. He falls in love with an awkward girl who works at a pet-shop named Adrian (played by Talia Shire of The Godfather fame, Francis Ford Coppola’s sister). Meanwhile, the heavyweight champion of the world, Apollo Creed (played by Carl Weathers), loses his competition so he starts a marketing campaign: the heavy-weight champion of the world will fight an unknown ‘cinderella’ named the “Italian Stallion.” In the end, they fight and Rocky shows surprising stamina surviving each round but in a split decision, the judges choose Apollo Creed as the victor. Not caring about the fight, the film closes as Rocky and Adrian embrace and profess their love for one another.

I cannot, for the life of me, figure out why this film is often praised so highly. The whole plot is a tired cliché, the quality of the filming is touchy at best, the vocal overdubbing is dubious, and the film is difficult for me to follow some of the dialogue due to Sylvester Stallone’s garbled speech patterns. Also, the “romance” between Rocky and Adrian is clumsy and uncomfortable. Yet for some reason, certain critics went so far as to identify Stallone the next Marlon Brando -imagine that! At any rate, the film is iconic mainly for the idea of what it represents – strength and resilience in the face of obstacles and so on, but to actually have to sit down and watch this film takes a fair amount of resilance.