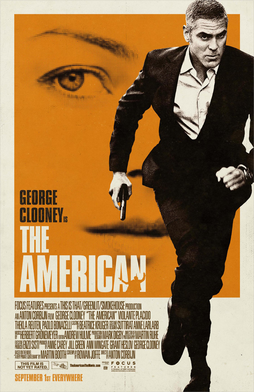 The American is a long, slow, artfully-made spy film about an American agent hiding out in a small Italian village. The story is based on the 1990 Martin Booth story, called A Very Private Gentleman. The book is told as a first-person confession by the main character for choosing his vocation while hiding out in a hillside town in Italy.

George Clooney plays “Jack” a gunsmith who is hiding out with a girlfriend in a remote part of Sweden when his identity has become compromised. He quickly kills two Swedish assassins hiding out in the trees above the snowy valley where his cabin sits. He then unflinchingly and shockingly kills his girlfriend, knowing that his identity is compromised. He flees to Rome and contacts his handler who sets him up in a hill-town called Castelvecchio, but he becomes suspicious and assumed a new name “Edward” and flees to the town of Castel del Monte instead. There, he is delivered a new job, to build a specific, custom-range sniper rifle for an assassin. Also, while living there he befriends a priest, and falls in love with a prostitute. After building the gun, Jack wants to leave the business, however at the end he realizes the gun he has been building is meant for himself. He rigs it to backfire, killing the assassin while he attempts to run away with his lover, but he is shot by his handler (whom he then kills). He then flees to a secret rendezvous spot with his lover in the woods by a river, only to presumably die right of his gunshot wound when he arrives.

Much of the dialogue for The American was borrowed verbatim from Graham Greene’s 1973 British spy novel, The Honorary Consul. I thoroughly enjoyed this film for its beautiful cinematography, shooting locations, pacing, character development, and espionage-esque themes. The story is compelling, though it is an incredibly slow-moving picture with little dialogue. Indeed, the film tries to be too intellectual with scenes of Jack and a priest discussing heaven and hell, as well as the motif of the butterfly (a tattoo which Jack has on his back, and which is viewed numerous times in the forest along with Madam Butterfly playing in the background). The first scene of Jack and his lover in the woods is an obvious allusion to Manet’s artwork of the nude woman having a picnic. Various other allusions are made to Once Upon A Time in the West and other westerns, as well. Ultimately, the film is excellent.