Die Nibelungen was actually filmed as a short series featuring both “Siegfried” as well as the “Kriemhild’s Revenge.” Fritz Lang co-wrote the screenplays for both films with his then-wife, and they, of course, based the story on the the medieval epic poem of the same name, the same epic myth that gave rise to Wagner’s Ring. 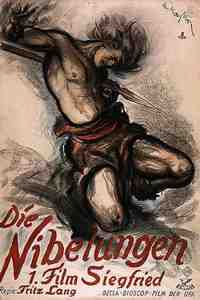 Die Nibelungen is an epic masterpiece from Fritz Lang, further cementing his reputation as the “master of darkness” and one of the definitive directors of the silent era. However the film(s) are extremely long, both parts lasting nearly 150 minutes each, but the sets and cinematography are worlds ahead of its time. Truly visually stunning. It is a beautiful film to view, but not to follow the plot and remain invested in its story.

The whole of the film is constructed as if modeled on a Romantic, Germanic fairy tale, with castles and forests filled with all manner of adventures and creatures. It tells the story of prince Siegfried who goes to win a woman’s hand in marriage, but first he is instructed to cross through a dangerous forest where he encounters a dragon which he slays and then bathes in the blood of the dragon, thus making him invincible, save for one lone spot where a leaf has covered his shoulder. As a result he can now communicate with the birds, as well. He battles with the dwarves of the mountain, and defeats them as they curse him and turn to stone. He arrives in Burgundy and eventually takes a princess’s hand in marriage. The first part ends in tragedy as Siegfried is killed, and the princess commits suicide at the foot of his corpse. Part II, details the revenge plot against Hagen, killer of Siegfried.