“You see, there are still faint glimmers of civilization left in this barbaric slaughterhouse that was once known as humanity.” 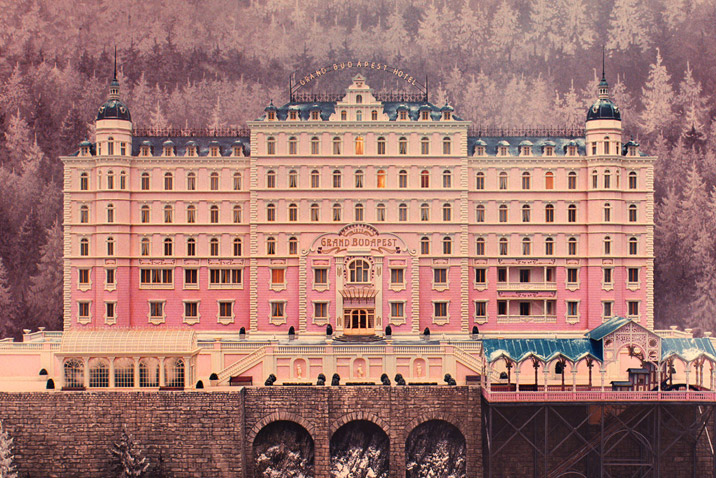 At the end of the film we learn that the plot was based on the writings of Stefan Zweig, a highly popular Austrian writer in the 1920s and 1930s. He wrote tragic and fanciful tales that were nevertheless field with sorrow at the senseless destruction of the two world wars. He ultimately fled Austria with his second wife and they both committed suicide together via barbiturate poisoning the day after sending his autobiography to his publisher.

The narrative of The Grand Budapest Hotel is framed in several ways. It opens with a girl paying homage to the grave of an “Author”. Then it cuts to a scene of the Author while he is still alive in the 1970s or 1980s as he explains his relationship with the Grand Budapest Hotel. Then it cuts to a scene of the writer as a young man (Jude Law) as he stays at the Grand Budapest Hotel and he meets the mysterious owner of the hotel one night for dinner, Mr. Zero Moustafa (F. Murray Abraham), to hear the story of how he acquired the hotel. Mr. Moustafa visits the hotel once per year and stays in a curious little closet of a room. It is set in the fictional Eastern European country of Zubrowka and the film jumps back to 1932 when Zero Moustafa was a mere lobby boy at the Grand Budapest in training under the flamboyant and charismatic, Mr. Gustave (Ralph Fiennes). He spends his time courting elderly, rich women, until one day one of them dies and she has bequeathed to Gustave a rare and priceless painting, “Boy with Apple.” Her estate is complex and her surviving family chases after Gustave as he and Zero steal the painting, which they rightly believe to be theres, and they form a pact -Gustave agrees to give everything in his possession to Zero upon his death. After a series of dramatic escapes, and a love story between Zero and a young woman, Agatha, they all encounter one another back at the Grand Budapest Hotel but on the back of the painting they find an updated will from the elderly woman stating that if she was found to be murdered she would leave her entire estate to Gustave. One day, on the train, soldiers stop Gustave and Zero and demand papers. Because Zero is an immigrant, Gustave fights the soldiers and he is ultimately shot – “You see, there are still faint glimmers of civilization left in this barbaric slaughterhouse that was once known as humanity.”

Now, many years later, the Grand Budapest Hotel has fallen into disrepair. Zero Moustafa keeps it as a reminder of the good times he and Agatha had together, she has long since passed on as a result of tuberculosis along with their infant son. The “Boy with Apple” painting sits forgotten behind the front desk. Zero Moustafa quietly goes to bed. Zero closes his story with: “To be frank, I think his world had vanished long before he ever entered it, but I will say: He certainly sustained the illusion with a marvelous grace!” The Author decides to turn this story into a book. At the close of the film we return to the little girl, reading a book about the Grand Budapest Hotel beside a statue of the Author.

In many ways the film is a contemplation on the recollections of Zero Moustafa. We are given scant information of the full story – his full romance with Agatha, or details of the death of Gustave, or even his backstory of being an immigrant whose entire family was killed somewhere in the Middle East/Central Asia. All of these important plot points are glossed over from Zero’s perspective. In the end, Zero wishes to take hold of some of his memories, keeping others private from the Author’s view. The theme of the holocaust and World War II runs rampant throughout the film -a dark undercurrent to a quirky and face-paced film. As so often occurs in Wes Anderson films, the artificial and artful set designs lead the audience to a self-aware feeling of delight yet ironic detachment from the films. In The Grand Budapest Hotel this anti-realist, dry-comedic formula is coupled with a somber, reflective tone as we learn the hotel’s heyday –a time of inspiration, vibrance, color, and adventure– has long since past and today the ghostly hotel is kept alive solely for the memories it brings to Zero.