Much of the project of early Christianity was focused on establishing doctrines of authority for the faith. This was done by establishing clear boundaries: us and them. The “them” included: Pagans, Marcion (the anti-Judeo preacher), and other heretical and Gnostic teachers. The “us” included: defenders of what they considered was the true faith, people like Clement of Alexandria or Irenaeus of Lyon. 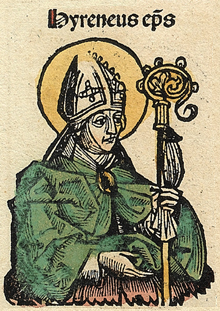 (A depiction of Irenaeus in the Nuremberg Chronicle)

One of the loudest defenders of Orthodoxy in early Christianity was Irenaeus, a Greek bishop in Southern France. Irenaeus is the link to Polycarp (apparently, Irenaeus claims to have heard Polycarp speak publicly), who is in turn the link to John the Evangelist. Irenaeus was born and raised in Greek-speaking ancient Turkey. He was a Christian leader in Lyon in modern-day France (or “Gaul”). All of his surviving writings are polemics against Gnosticism. Irenaeus is believed to have died a martyr’s death

Irenaeus writes his most famous text, Against Heresy, while among the “Keltae” -or the Celts of France. Irenaes’s text is explicitly a polemic against the heretical teachings, such as those of Valentinus and his followers who imagine a fabled “Aeon” that existed prior to the world, as well as a detailed study of prophetic teachings in the Old Testament (including an odd and confusing numerology, an account of the birth of the Demiurge from the cosmos and so on). The first VI chapters of Irenaeus’s work detail these Gnostic beliefs. Beginning at Chapter VII, Irenaeus argues against the Gnostic perversion of scripture

Remarkably, in Chapter X, Irenaeus provides a need for one solidified and unified faith for the Church throughout the world. This chapter contains the early seed of the future “Nicene Creed.”

Other people Irenaeus argues against include: Ptolemy and Colorbasus, Marcus, Magus, Menander, Saturninus, Basilides, Carpocrates, Cerinthus, The Ebionites, Nicolaitanes, Cerdo, Marcion, Tatian, The Encratites, among other people and sects.