Metropolis is regularly cited as the greatest film to emerge from the silent era and not without merit. Metropolis is a monumental achievement of a dystopian future not so foreign from our own. Its rich subtext of Biblical allegory, inspiring story, and dazzling sets make it one of the greatest films yet completed in this series. Certainly a film everyone should see at least one time (if not more than once).

Metropolis is a pioneering epic science fiction film of the German Expressionist era. It was made during the Weimar era in Germany and cost about five million Reichsmarks with the architectural work of Antonio Sant’Elia. The film was cut substantially by censors after its release around the world. In 2008, an original cut was found in a museum in Argentina and the restoration process was able to bring about a 95% accuracy of the lost film. Since its release, it has been dubbed over numerous times by rock bands and composers, giving its score a living history.

The dystopian story was actually taken from Lang’s wife, who crafted it, and the massive sets of the city were inspired by New York City.

The film opens with a title:

“The Mediator Between Head and Hands Must Be The Heart”

Day in and day out, workers that live below the city are busily running machines that power the massive electricity needed for the aristocracy that lives above ground. Every ten hours a new consortium of workers enters the Workers’ City to continue running the machines.

city below the earth,

so high above it towered

the complex named the ‘Club

of the Sons,’ with its lecture halls

and libraries, its theaters and stadiums.”

After viewing the horrors of the Workers’ City, we are brought above to the Edenic woods called the Eternal Gardens where men and women of the aristocracy procreate. They are interrupted briefly by a woman who brings her class of children above ground so the adults can see what their children look like now. She reminds them that these are their brothers. 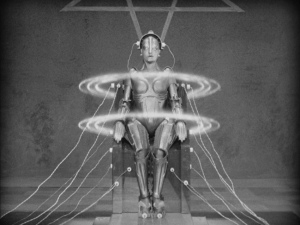 Freder, son of the President of the aristocratic city, falls in love with the woman, named Maria, and devises a plan to trade places with a worker so he can see what truly happens in the Workers’ City. He goes below to find that when there is a hiccup in the machine, dozens of workers must sacrifice themselves to Moloch, one of many Biblical allusions throughout the film. Horrified he trades places with one individual and after a tireless day of work he goes to meet the woman who preaches of Christian virtues to the workers.

Meanwhile, Freder’s father goes to visit Rotwang, a mysterious German scientist who lives in an old house that has been overlooked for centuries while the machines rose around him. Here he has been developing a humanoid robot to reincarnate Fredersen’s dead wife. Together, they witness Maria’s small religious gathering and they decide the time is nigh, but as Freder’s powerful father leaves, Rotwang makes an ominous remark about the robot rising against Freder’s father.

Rotwang captures Maria and brings her back to his house as he reincarnates her in the robot, so they share the same face. The newly reincarnated Maria dances a nearly nude dance in front of hundreds of men and she then shares the stage with his father. Freder nearly faints and imagines the apocalypse is at hand, with the statue of the Grim Reaper reaching out to him.

Freder partially recovers from his sickness and reads the book of Revelation. The robot who looks like Maria leads a band of workers to rise up against the aristocratic city, contrary to the former Christian virtues espoused by the real Maria. Meanwhile, Joh Frederson breaks into Rotwang’s home and attacks him as the robot Maria wreaks havoc on the city. The new robot Maria goes to destroy the heart of the machine and the Workers’ City begins to be flooded as the electricity is all shut off.

The real Maria escapes and she rescues the children. Some of the workers gather and dance around the destruction of the machines, in a cult-like fashion. Others grab the robot Maria and set about a pyre to burn her. Freder arrives, thinking it is the real Maria, and he begs them to stop -but as he does her face burns off revealing her robot armor. The people stand around in shock.

Rotwang spots the real Maria, not knowing his robot has been destroyed. He chases her up to the tower where she rings a bell and Freder comes to save her by casting Rotwang off the building.

Freder then is celebrated as he becomes the Mediator between the Hands (the workers) and the Head (the aristocrats) through the Heart.

The film is fused with dialectical relationships between classes, man and machine, city and country, traditional faith and scientism. The redemption found at the end suggests a hope for the future of man and machine, as well as worker and aristocrat.