In the first book of Samuel, we find the Israelites in demand of a new form of governance. Recall the chaos and waywardness of the Israelite people in the book of Judges, as well as the failed rulership of the judges. Now, prophets like Samuel are no longer sufficient, and instead, the Israelites demand a single ruler: they request a king. What is the cause of the people of Israel suddenly demanding a king in the book of First Samuel? 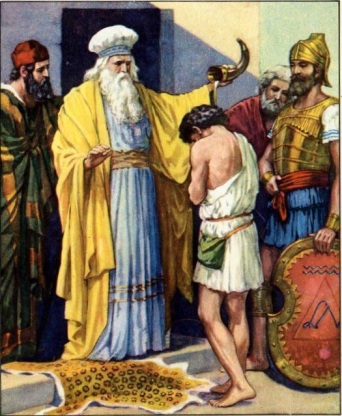 Throughout the Torah and the History Books, Israel has been ruled by either 1) The Lord as he travels with them in the Ark of the Covenant, or 2) the Judges (such as Samuel). However, Samuel bears two children: Joel and Abiah, and neither “walk in his ways.” They chase after riches and bribery, rather than judging people with wisdom.

Therefore, the elders of Israel gather with Samuel to remind him that he is old, and they command him to appoint a king, “…now make us a king to judge us like all the other nations” (8:5). The people notice that their method of enacting justice is abnormal, when considered in contrast to other nations, and they want to be like all other nations. They have lost their desire for uniqueness appointed by The Lord in the early books of Genesis and Exodus. Curiously, in acknowledgement to Samuel, The Lord tells Samuel to hearken unto the voice of the people because they have rejected The Lord to reign over them.

Meanwhile Samuel’s father, Kish, loses his asses and sends Samuel to find them. Upon arrival, The Lord spoke in Samuel’s ear that Saul should reign over the Israelite people. When the tribe of Benjamin was awarded the lot, they found Saul who was taller than all the men from his shoulders up. Samuel announces that Saul is chosen by The Lord and there is none among them who can rival Saul, and the people chant ‘god save the king.’

Saul justifies his kingship by defeating the Ammonites who threatened his power. He musters an army by instilling fear. Saul cuts up an oxen and sends its pieces throughout Israel as a warning to those who come against he and Samuel. “And the fear of The Lord fell on the people, and they came out with one consent” (11:7). Saul views his rulership jointly with Samuel, as there is no ‘wall of separation’ between church and the ship of state. Upon victory Samuel reminds the people of The Lord and to follow his ways, rather than the ways of politics. In the Bible, we discover a conflict between the city of man, and the city of God, best exemplified in Augustine’s seminal work. However, Augustine attempts to make a compromise with politics by urging Christians to become like “pilgrims” on earth by following the laws (give unto Caesar what is Caesar’s), but to have full faith and loyalty in the celestial kingdom which is unending, unlike the city of man which, though it endures, rises and falls. Samuel does not make these same capitulations in the books of Samuel.

Unlike Samuel, Saul leads as a warrior king. He wars with Moab, Ammon, Edom, Zobah, and most notably against the Philistines. He also destroys the Amalekites and brings Agag, their king, out before the people and cuts him into pieces. After this, Samuel visits Saul no longer. He has chosen a dark and ungodly path.

The Lord calls Samuel to travel to Bethlehem to find a new king as Saul has displeased Him. This time, The Lord commands Samuel to look not on the physical stature of the man, like Saul’s height, but rather to look at his heart. The Lord rejects all of Jesse’s children except the youngest sheep tender, who was ruddy and pleasing to look at, named David. He is sent to the court of Saul to play a harp in order to ease an evil spirit that is plaguing Saul. As he remains with the court, and during the Philistine wars, David is ultimately chosen to kill the warrior Goliath of the Philistines, in the classic tale. Upon victory, he is praised by the people and Saul becomes jealous of David and tries to kill him. However David is loved by the people and he eventually marries Saul’s daughter.

David becomes a captain in the army and Saul eventually repents and reconciles with David until his and his three son’s deaths at the hands of the Philistines. The book of I Samuel ends with the death of Samuel and also the death of Saul, who falls on his own sword rather than be taken by the “uncircumcised” Philistines.