The Book of Jonah is the chosen book for thousands of latter missionaries who feel themselves to be heeding the call of God. Like Jonah, they feel themselves called out to distant lands, Nineveh, to proselytize and convert the foreign natives. Indeed, Jesus also cites Jonah as the apt metaphor for the sign of his own divinity -swallowed by the fish for three days and three nights, before being spit up onto dry land. 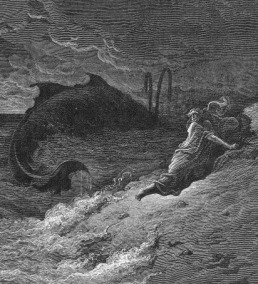 Rightly, Jonah fears his command that comes from the Lord and instead flees to Tarshish aboard a boat. He flees from the ‘presence of the Lord’ and he sleeps below deck, while God raises a mighty wind that forces the seamen to draw lots. When they learn of Jonah’s actions, the crewmen become exceedingly fearful of his god.

Unlike with Job, God takes an active role by intermediating directly into the life of Jonah. Only after Jonah prays from the belly of the fish, does God respond a second time commanding him to go “cry against” the city of Nineveh. Upon doing this, the people of Nineveh turn from their evil after Jonah claims that the city will face a reckoning after forty days. However, when God does not destroy the city in similar fashion to Sodom and Gomorrah, Jonah grows angry and wishes death on himself. God curiously gives him a gourd as Jonah sits at the east end outside the city, and God demonstrates that the gourd is a metaphor for the city. The book ends with the Lord asking whether or not he should spare Nineveh, and Jonah still longing for death.

For this reading I used Robert Alter’s masterful translation as well as the King James Version.