The Thief of Bagdad is loosely borrowed from parts of the classic of world literature, the Thousand and One Arabian Nights. The film is a grand early blockbuster of the silent era. It stars the “first celebrity” of Hollywood, Douglas Fairbanks, and it was reported that he considered this film his favorite. There were later remakes, including Disney’s Aladdin.

The Thief of Bagdad tells the story of Ahmed, a comical thief on the streets of Bagdad as he robs freely from many different street vendors. In an early scene, he can be seen running from the authorities as he amusingly jumps between pots in the market. This was filmed using trampolines. In his unobstructed robberies, he takes a magic rope and climbs up into the Princess’s room but he is caught by one of her Mongol slaves. He escapes and his associate reminds him of a story of a man who stole a princess. So Ahmed decides to try to steal the Caliph’s daughter. 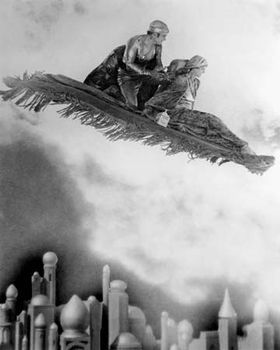 The next day is the Princess’s birthday and the suitors are coming to ask for her hand in marriage. An attendant of the princess instructs her that the first man to touch her rose bush will be her husband. There are three suitors, aside from Ahmed, and the leader of the Mongols, the clear villain of the three, is warned by an attendant to touch the rose bush so he can reaffirm the Princess’s superstitions, but he is scared off by a bee just as Ahmed’s horse launches him into the bush, proving the prophecy. However, later that night after she chooses Ahmed, the Mongol prince discovers that Ahmed is nothing more than a common thief and he informs the Caliph who orders that Ahmed be lashed.

In order to delay her decision, the Princess says that she will marry the man who bring to her the most exotic item over the next “seven moons”. The Persian Prince (played by a woman) retrieves a flying carpet, and the Mongol Prince gets an apple that will cure anything. He instructs his surrogates to poison the princess while he returns to Bagdad on the Persian Prince’s flying carpet. Ahmed receives a cloak of invisibility and some magic powder that will transform into anything Ahmed wishes.

Upon his return, the Mongol Prince orders his army to capture Bagdad after saving the Princess with his apple. However, Ahmed returns and storms the city of Bagdad with an army he conjures with the powder. He rescues the Princess with his invisibility cloak and as a reward, the Caliph gives him her hand in marriage.

The Thief of Bagdad is a film of epic proportions. Walsh once claimed it was the first Hollywood film to cost more than $1 million. However, Fairbanks also gave considerable direction and financing to the film, and many of the film’s special effects, such as a flying carpet or a magic rope, are to his credit. The movie avoids close-ups and, instead, displays more wide-angled shots to capture the largess of the sets. It was distributed, as expected, by United Artists.

The Thief of Bagdad is a good film. It is entertaining and amusing. In keeping with the tradition of other Fairbanks movies, the film is a satire of many swashbuckling movies -a comedy of errors. It is a long film, running at nearly two and a half hours. It is recommended for devotees to classic cinema and fans of Douglas Fairbanks (or else Disney purists searching for the inspiration behind their movies!)