Go West is a delightful film filled with Keaton’s classic gags. It is clearly a precursor to The General with his notable fascination with trains and the old west. Much of the film was shot in Arizona in extremely hot weather and it was not one Buster Keaton’s favorite films, though it was successful at the box office. 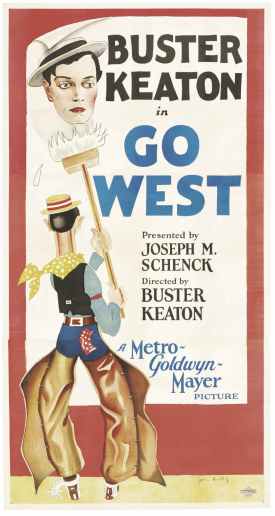 It tells the story of an unsuspecting hero, Friendless, who ventures west to become a cowboy when he sells his possessions in the city and is unable to find a job. He befriends a cow, Brown Eyes, who protects him from a bull attack. In the end, he saves Brown Eyes from certain death after leading a herd of cattle through the city of Los Angeles. Friendless saves his rancher employer and demands to have “her” (to which the rancher assumed Keaton is referring to his daughter, but in fact Keaton points over to the cow, Brown Eyes). It is the closest film in Buster Keaton’s repertoire to match the sentimentality of a Chaplin picture (some have speculated that the more sentimental tone was due to the deaths of several of Keaton’s gag men).

Go West is a good movie. Although it is not Keaton’s best, it is definitely worth viewing for classic film aficionados. It is a wonderful precursor to Keaton’s western, railroad masterpiece, The General.