Hitchcock’s 39 Steps is an excellent film, and a glimpse of greatness from the ‘master of suspense’ in the future. It tells the tale of an innocent everyman who is framed by a wild conspiracy, a la North By Northwest. It should be an essential for every lover of classic films.

The films tells the story of an everyman, Richard Hannay, who watches a performance of a wondrous “memory man” who can recall any fact asked by the audience during a performance in London. Suddenly, chaos ensues and gunshots are fired, and Mr. Hannay finds himself helping a seemingly alarmed woman out of the crowd who asks to go home with him. Upon arrival, she explains to him that she is a spy and that there are two men following her and begs him not to answer the phone. In the middle of the night, he discovers that she has been stabbed. He takes her map and steals the milkman’s outfit and escapes with the two men shortly on his trail. He flees to Scotland by train and foot until he arrives at the destination on her map, only to find that the man whose residence at which he has arrived is a foreign spy (missing his pinky finger). The foreign man shoots him, but is prevented from killing him due to a Bible in the upper pocket of his coat that he stole from a man’s house in Scotland. This leads to a wild chase with a blond woman he met on the train as they are handcuffed together by two strange men pretending to be detectives, but it is revealed that they are actually operates for the foreign man. Together the two flee until they arrive at a performance of Mr. Memory at the London Palladium. Mr. Hannay connects the dots and shouts out asking Mr. Memory “what are the 39 steps?” at the end of the film. Before he can completely respond he is shot by the foreign man who is captured. Shortly before dying, Mr. Memory recounts the story of the 39 Steps, a group of international spies that are trying to commit espionage, and he also details the schematic of a silent aircraft. 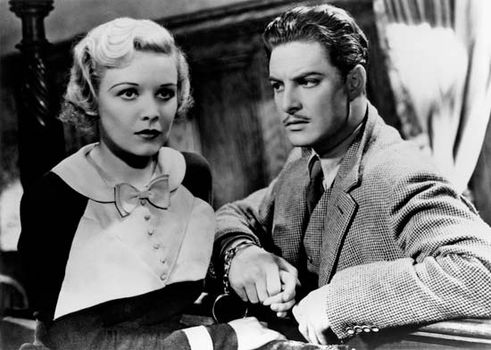 It is Hitchcock’s first major film as a director, and shows clear signs of influence from the German expressionist period of silent film.