Blackmail is a nail-biting film in the model of an Aeschylean Greek tragedy. Blackmail certainly stands apart from other films of the 1920s decade for its unique cinematography and the suspense it creates within the audience, while also communicating a brilliant retelling of a murder story not unlike Dostoevsky’s Crime and Punishment. It is a top quality film worth seeing many times by all lovers of classic film. 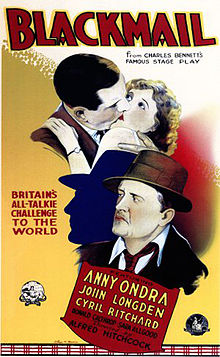 It tells the London-based story of Alice White who is at a tea house with her boyfriend, Detective Frank Webber. When they get into an argument she goes to talk to another man, Mr. Crewe, who invites her up to his room. They paint over a picture of a sad clown together and he plays the piano. Much to her disgust he steals a kiss from her. As she is getting changed to leave, he steals her dress and tries to rape Alice, but she stabs him to death offscreen (notably the murder takes place away from the audience a la Aeschylus’s Agamemnon). She rips in the hole in the painting and leaves the flat in a daze, wandering the streets at night. She thinks she has removed all traces of her presence but accidentally leaves a glove. Her boyfriend Frank is assigned to the murder case and they are blackmailed by someone who discovers this glove. A man named Tracy is wrongfully blamed for the murder, and as the tension mounts, Alice decides to turn herself in to the police but before she can she confesses the whole truth to Frank and they leave the police station together as a policeman carries the infamous painting past.

It was initially intended to be a solely silent film, but Hitchcock worked it out with the studio to be a “talkie”. Hitchcock’s famous cameo occurs when a young boy bothers him on the London Underground subway while he reads a newspaper. As per usual with Hitchcock, the sound, camera angles, focus, and influence of late German Expressionism hold a particularly high place in the creation of the film.