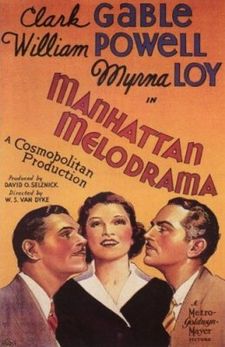 Manhattan Melodrama is a somewhat boring movie. The film is based on a story by Arthur Caesar, and won the Academy Award for best story. It stars Clark Gable, Myrna Loy, and William Powell. It was the first of fourteen on screen pairings between Myrna Low and William Powell. The film is most known for the famous mobster, John Dillinger, who attended a screening of the film in 1934 in Chicago and was promptly gunned down by federal agents while leaving the theatre. To the dismay of the actors, including Myrna Loy, the film production company exploited the event for press coverage.

Two young boys are rescued by a priest when a ship catches fire outside New York and sinks. They are taken in by a Russian immigrant who dies while protesting a Trotskyite communist rally in New York. The boys go on to lead separate lives while remaining close, one becoming governor the other a famous mobster and casino magnate. They even fall in love with the same woman. One is tried for murder (which he committed) and is sentenced to death in the electric chair. There is a brief tender moment at the end when they reconnect and the governor offers to commute his sentence which the gangster denies. In the end, the governor resigns his post as his friend is electrocuted.