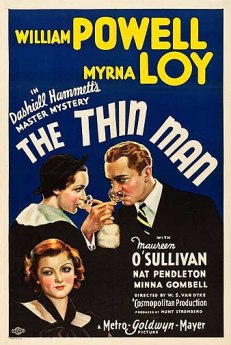 The Thin Man is based on the mystery novel by Dashiell Hammett. It is an amusing comic film starring William Powell and Myrna Loy. It tells the story of Nick Charles and Nora, a retired detective and his wife trying to settle. They travel from San Francisco to New York, where Mr Charles is approached by the daughter of a former client. Mr Wynant. He was on a mysterious business trip before he vanished, during the course of the investigation, Mr Wynant’s secretary is discovered dead. The true killer is revealed during a famous dinner party scene, and Mr Charles solves the case.