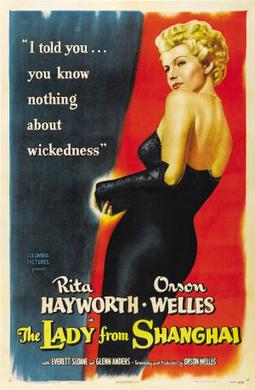 This Welles film noir, starring Rita Hayworth and Welles, is based on a novel If I Die Before I Wake by Sherwood King. Controversially, Welles had Hayworth chop her hair and also dye her famous red hair blonde for the film. Shortly after the release of the film, Orson Welles and Rita Hayworth finalized their divorce.

In the film, Orson Welles plays Michael O’Hara, an Irish sailor who rescues a blonde woman one night from assailants of her carriage in Central Park, NY. He learns her name is Elsa, and that she is married. Elsa and her husband, a disabled defense attorney, Mr. Bannister, invite Michael onto their boat. They are planning to sail via the Panama Canal to San Francisco. Reluctantly Michael agrees to join. Mr. Bannister’s partner also joins them and persistently beckons Michael into a plot to stage a fake killing of Mr. Bannister in exchange for $5,000, which would allow the new secret lovers, Elsa and Michael, to run away together. Privately, Brisby, the partner, actually intends to kill Bannister and frame Michael for his death. A private investigator, Broome, discovers the plot but he is shot and not killed by Brisby (though later he winds up dead). The case is brought to trial, but Michael escapes in faking an attempted suicide. He reunites with Elsa in a Chinese theatre, when he soon discovers that Elsa was the true killer of Brisby. The movie concludes with a climactic and famous shootout in the madhouse of the boardwalk, with confusion about who is shooting as the funhouse mirrors are continuously destroyed. In the end, both spouses shoot each other, Bannister fatally and Elsa mortally. Michael leaves the scene as Elsa screams in pain. The film closes with his words: “Maybe I’d forget her. Maybe I’d die trying.”

The film was praised upon its release in Europe, but largely overlooked in the United States. While receiving mixed reviews in its heyday, the film is a great film as is common for an Orson Welles film. The shootout at the end in the madhouse is of particular note.