Thornton Wilder captures the sublime in one tragic, yet undeniably significant moment in The Bridge of San Luis Rey. The novel was first published in 1927, between the world wars, and it was Wilder’s first big breakthrough as a writer. It won the Pulitzer Prize in 1928. 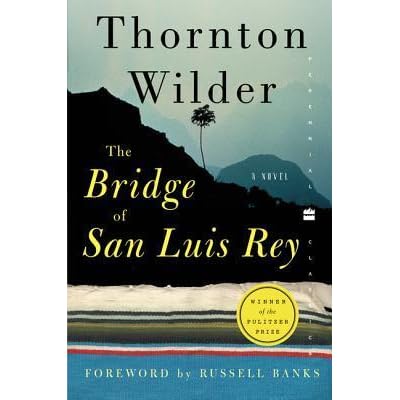 The novella explores the lives of five individuals who tragically fall to their deaths while crossing an ancient Incan bridge (on the road between Lima and Cuzco) on July 20, 1774 in Peru. The story is told in five short parts, each telling the background of the five characters. Each story is a kind of eulogy to their five lives. Upon learning of the accident, all of Peru becomes obsessed. One man, in particular, Brother Juniper, a witness to the bridge’s collapse, spends the remainder of his life trying to discover the mystery of the accident. As a Franciscan friar, he hopes to unveil the deep interconnectedness of God’s purpose. What is God teaching about these five people who died together when the bridge snapped? How do we make sense of this tragedy? Is there any meaning at all? Brother Juniper proceeds empirically, like a social scientist, spending years interviewing people who knew the five victims. He compiles a huge book (in contrast to Wilder’s small novella) that professes to reveal God’s grand plan. Ironically, the Church finds Father Juniper’s book blasphemous. It confiscates the book (Father Juniper’s life work) and commits it to the flame, along with Father Juniper. However, one copy of the book is secretly preserved, though it sits collecting dust, unread at the Library of San Marco.

In The Bridge of San Luis Rey, there is an element of the ‘found text’ style of writing. We get a feeling of archaeological discovery in Wilder’s novel, and as readers of the book, we feel like explorers discovering something sacred and forgotten, like a sealed Egyptian tomb. Each of the five people who died on the bridge are now long forgotten, and Brother Juniper is also forgotten, as well. His death seems to have served no larger purpose, and his life’s work, a book of divine inspiration, lies wholly forgotten and unread. We tend to forget what we do not care to read. After all, there are no heroes or villains in the case of a simple bridge collapsing. There is no one to blame; just five lives lost, and the world has continued moving onward. However, Wilder beckons us to pause from our busy lives and question the meaning of the moment. To what extent do we experience a sacred feeling in this novella? At first, we see the ways people spend their lives, how they lose their lives, and the way others try to make sense of it. Brother Juniper’s life, for example, runs parallel to the lives of the five victims. He was the next person to cross the bridge when it fell, sending those five ahead of him to their deaths. However, Brother Juniper later meets his own death as a result of the incident: he tries to discover its hidden meaning and he is martyred by the church for it. According to the church, the science of God is to remain mysterious, not to be verified or “proven” empirically (despite Francis Bacon’s purpose). Nevertheless, as audience members to this unique tale, we feel like we are transgressing into some space that is rarefied, deep, mysterious, even holy; or in a word, sacred.

Like the fierce madness of Captain Ahab in Moby Dick, Brother Juniper also imputes human reason and human values onto a possibly cold and indifferent natural world. Perhaps a bridge simply snapped killing five people, and that is all the story is able to tell. While the bridge represents different things to different people in the novel, we are particularly called to consider the spiritual significance of death from the perspective of Brother Juniper. The novella reads like a Spanish report and a synopsis of Father Juniper’s intensive research -a report we are privileged to possess and consider.

The Bridge of San Luis Rey is a brilliant short novel. It is a visionary work that inquires into the nature of morality, spirituality, life, death, and meaning as alethea or logos. It has a greater degree of depth than other early Pulitzer Prize winner. Notably, unlike other Pulitzer winners from the 1910s and 1920s, the setting of The Bridge of San Luis Rey takes place far away from the rolling prairies or the booming cities of the United States. Instead, it takes place in a remote part of Peru. The novella is a wholly unique story for this time period. It is a well-deserved award for a beautiful little novel.

Apparently, John Hersey used The Bridge of San Luis Rey as the inspiration for Hiroshima, his monumental work of journalism which explores the explosion of the atomic bomb through the perspectives of five different survivors. The Bridge of San Luis Rey was quoted by British Prime Minister Tony Blair in relation to the terrorist attacks on September 11th, as the novel deals with similar questions of random tragedy, and the nature of guilt and innocence in a harsh and unforgiving world.

I close with the opening words of the novella:

“On Friday noon, July the twentieth, 1714, the finest bridge in all Peru broke and precipitated five travelers into the gulf below.”

Who Is Thornton Wilder?

Thornton Wilder (1897-1975) was born in Madison, WI in 1897. He was the son of a newspaperman, who later became a U.S. diplomat. He was a shy child who was frequently mocked in grade school. He attended the Thacher School in Ojai, CA. He later attended Oberlin, then graduated from Yale, and received a Master Degree from Princeton University.

He traveled widely and received commercial success with his second novel, The Bridge of San Luis Rey in 1927. He also won the Pulitzer Prize for Theatre for the brilliant and inspiring Our Town in 1928 and then again for The Skin of Our Teeth in 1943. He led a storied life, serving in the army, and later teaching at Harvard University. He wrote the first draft of the screenplay for Hitchcock’s Shadow of a Doubt. Wilder may have been a private homosexual, as recent inquiry seems to suggest.

With the proceeds from The Bridge of San Luis Rey, Wilder built a house for his family in Hamden, Connecticut (for his sisters and himself) though he was frequently away traveling. He died of heart failure at this home in 1975.