The Blood of a Poet is an avant-garde, surrealist, and slightly unsettling movie. Director Jean Cocteau developed the idea for the movie shortly after his notable novel, Les Enfants Terribles. It was the first part in his ‘Orphic trilogy’, followed by Orpheus nearly 20 years later in 1950 and then Testament of Orpheus in 1960.

Chilean actor, Enrique Riveros, stars as an unnamed artist whose works suddenly come to life. His statue transports him to another world through a water-based mirror. He witnesses an odd assortment of things through a hotel keyhole and is persuaded to shoot himself in the head. He loudly screams hoping to return to his world. Towards the end of the film he destroys his living statue. The next scene shows a group of boys have a schoolyard snowball fight. A snowball is thrown at a boy, but it suddenly turns to marble and kills the boy. The final scenes include a disturbing card game played over the body of a dead boy, and the losing player kills himself while the previously dead boy comes back to life. 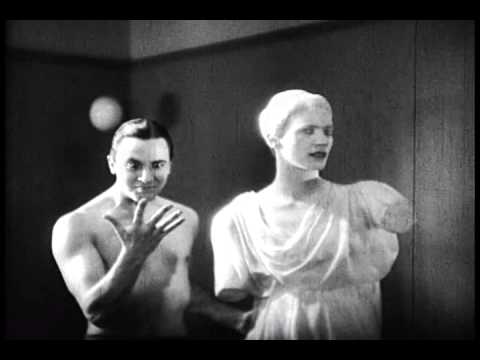 The film was funded by the Vicomte de Noallies who gave Cocteau 1,000,000 francs to create the movie. Noallies was originally filmed for a scene in which he and his wife applaud the card game, but upon realizing they were cheering for a game which ends in suicide. They immediately demanded to be removed, which Cocteau obliged. The film was highly controversial, along with another contemporary surrealist film, L’Age D’or. The Blood of a Poet caused riots and rumors of anti-Christian subtexts in the film. The Viscomte was banned from the Jockey-Club of Paris and he was threatened with excommunication from the Catholic Church for his involvement. The whole furor delayed the film’s official release until 1932, rather than 1930 when it was completed and initially screened.

Visually, Le Sang d’un Poète, is a great film with a dreamy or perhaps nightmarish quality and as such it presents remarkable cinematography. However, the avant garde absence of a meaningful plot, interspersed with scenes of grotesque heads or masks, makes this film difficult to stomach for this less-than-sophisticated viewer.