Thirty years prior to Euripides’s first performance of Helen at the Dionysia in 412 BC, Herodotus of Halicarnassus echoed a controversial theory of the story of the Trojan War. In Book II of his famous Histories, or “Inquiries”, Herodotus suggests that Helen of Sparta, wife of Menelaus, was not actually taken to Troy, but was instead transported by the gods to Egypt. In her stead, they created a phantom, or “eidolon,” that looked and acted like Helen. Recall the story of Paris, son of Priam, choosing Helen as the most beautiful woman of the ancient world, over and against a jealous Aphrodite.

This was supposedly the true account of Helen, the “face that launched a thousand ships.” According to Herodotus, who gathered this story from his travels around Egypt, Homer was aware of this account but he did not include it in the epics. The story was also echoed by Hesiod and Stesichorus, the latter of whom penned an apologia to Helen for his earlier brow beating criticism. And Stesichorus was not alone. All throughout the ancient world, Helen was criticized as the femme fatale whose renowned beauty instigated the greatest war of the ancient world. 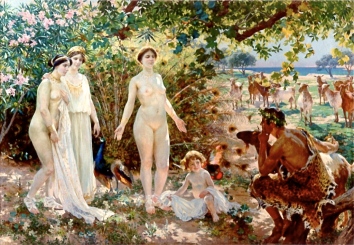 Euripides plays on this ancient prejudice and he employs the Herodotean account of Helen in his romantic tragedy Helen. He opens the play, much like Iphigenia in Tauris with the leading female, Helen, stranded alone in Egypt, under the control and protection of Memphis. She laments her status as the cause and blame of the Trojan War. Suddenly, Teucer, a Greek exile, washes ashore and tells her of how Menelaus is believed dead because he never returned home from war. All this time, totaling 17 years, Helen has remained faithful to Menelaus. Shortly thereafter, Menelaus himself appears in Egypt and is reunited with Helen. Together, they devise a plot to escape back to Sparta.

Why is this account of Helen’s story important? Two points. First, this is the first time we hear Helen’s account of her station in life. It is common to note Euripides’s use of many female characters, like Helen, Iphigenia, or Medea, but there is greater depth to the play than simply a need to balance representation of genders. Helen is blamed by all of Greece for an act she did not commit. And she is doubly cursed because she is trapped in Egypt. For example:

“Women and friends, what is this destiny on which
I am fastened? Was I born a monster among mankind?…
And so my life is monstrous, and the things that happen
to me, through Hera, or my beauty is to blame.
I wish that like a picture I had been rubbed out
and done again, made plain, without this loveliness,
for so the Greeks would never have been aware of all
those misfortunes that now are mine.” (255-265)

And second, the story is significant because if ‘Helen of Troy’ was a mere phantasm, then what was the purpose of fighting the Trojan War? There was nothing to gain. This is the most pitiable perspective of the Trojan War, reiterated by the most tragic of the poets.

Lastly, consider the context in which the play was presented. It was late winter at the urban Dionysia. The wildly unsuccessful Sicilian Expedition (415-413 BC) was fresh in the minds of the Athenian audiences, when Athens came to the aid of Sicily as it was under attack from Syracuse, allies of Sparta. The relative peace of the Peloponnesian War had ended. Alcibiades led the expedition but was recalled midway through. In the end, the Athenians were embarrassingly defeated. All surviving soldiers were either enslaved or killed, as noted by Thucydides, and Sicily was destabilized and forced to submit to a tyrant in order to repel the forces of Sparta. It was a turning point in the war.

For Euripides, Helen is an exploration into the pity and meaninglessness of war by revising the official Homeric account of the greatest war in the ancient world. It is a conciliatory work toward the hope of a once again unified Greece. By making Helen the central tragic figure of the play, Euripides removes any blame on Sparta for their responsibility in spawning Helen, the fire that ignited the Trojan War.