The Kid Brother (1927) Director: Ted Wilde (though there were several directors)

The Kid Brother is another fun movie from Harold Lloyd. As usual, the Criterion Collection did a masterful job of revitalizing this Harold Lloyd film, though I prefer Lloyd’s most popular film, Safety Last! Nevertheless, it is an amusing film worth seeing for lovers of classic cinema. 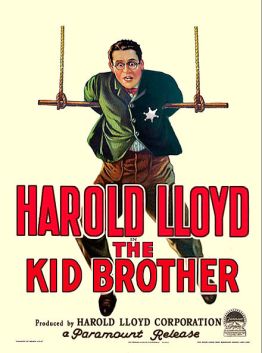 The film is the story of the Hickory family, a respected rural family with three sons of the local sheriff. The two older brothers do not respect the youngest (Harold) for his weakness. A traveling medicine show comes to town, and Harold, who is wearing his father’s gear, is mistaken for the local sheriff. There is a young woman, Mary, who goes with the traveling show since her father died. Harold authorizes the medicine show, much to the chagrin of his father.

Harold gets in a fight with Hank, his arch nemesis who starts a fire and burns down the medicine show wagon. Harold invites Mary to stay the night at his family’s home in part so she can avoid the unwanted attention of a creepy man, Sandoni. The next day, Farrell and Sandoni are missing as are the funds for building the town dam, and the sheriff, Harold’s father, is blamed. He sends his two older and stronger sons after Farrell and Sandoni but they turn up empty handed. Mary is then accused of theft, as well, and Harold is knocked out into a row boat while trying to defend her and he is sent adrift until he awakens at a boat where he finds the missing men and money. He recovers it and returns it to the town of Hickory, freeing his father. In the end, he finally becomes a Hickory family member.

Lewis Milestone originally directed the film, but he abandoned the project due to a dispute. Then Ted Wilde took it over, as Lloyd’s friend, but he ultimately quit as a result of pneumonia and died in 1929, as well, and Lloyd ultimately finished the directing role for the film.

In the 1970s Lloyd eventually had his own show, featuring clips from his silent films. In his heyday he made more than 300 films. He retired after completing six talkies and proceeded to preserve the original negatives for his films, though many were lost in  a tragic fire in 1943 in his private studio and it nearly destroyed Lloyd. He died in 1971 and steadily his films have been re-emerging through the likes of the Criterion Collection, and others.