On the Short Films of the Edison Studio

Blacksmithing Scene (1893) Director: W.K.L. Dickson
The aptly-named “blacksmithing scene” is a short clip which is significant for being the first publicly shown Kinetograph motion picture. It was first screened in May of 1893 and it features a stationary camera recording of three blacksmiths hammering on an anvil, then pausing for a moment to share a drink of beer, before continuing. 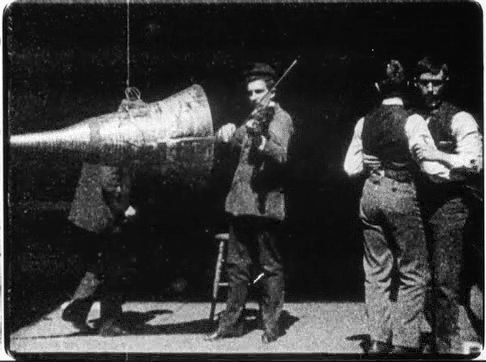 This early experiment in synchronized sound with film was shot at Thomas Edison’s studio in West Orange, New Jersey, popularly called the “Black Maria.” It was a test of Edison’s “Kinetophone” project. The wax recording of the sound (as seen in the film) was believed to be lost for many years until it turned up in 1964 as a broken cylinder in Edison’s National Historic Site. The disk was called the “Violin by WKL Dickson with Kineto.” In 1998, the wax cylinder was repaired and re-recorded in New York. It was the first time the film and sound were matched since Edison and Dickson originally put the two together over 115 years prior.

Vaguely in the background the audience can hear someone (perhaps Edison or Dickson) saying “Are the rest of you ready? Go ahead.” The film lasts a few seconds and shows a man (Dickson) playing a violin as it is being translated into a wax recording while two other men dance beside him. Another man appears in the background before the footage terminates.

There is no evidence that Edison or his team featured this film in any kind of public display, however there is reason to believe they produced many other joint “Kinetophone” films, yet sadly this is the only short film that has survived. The song being played on the violin is from an 1877 Robert Planquette opera called “The Chimes of Normandy.” The film lasts about 17 seconds while the wax cylinder contains about 23 seconds of total sound. Tragically there have been some latter “sophisticated” modern interpreters who claim all manner of ‘homoerotic’ interpretations of this film because of the two men dancing together, though I must say I think that is a stretch.

It is impossible to properly evaluate a film of such technological importance to the history of cinema, but it is important to note that synchronized sound was a key objective of early film-making. What does this tell us about the ultimate goal of the cinematic art?

Other early clips of this sort included a recording of a long-time Edison employee named Fred Ott inhaling his snuff and promptly sneezing; or a recording of Annie Oakley shooting at glass balls (Edison was friends with Buffalo Bill and his traveling roadshow which featured Annie Oakley); and of course “The Kiss,” featuring the first onscreen romantic kiss between May Irwin and John Rice, who were both Broadway and vaudeville actors portraying the final scene from a popular show called “The Widow Jones.”