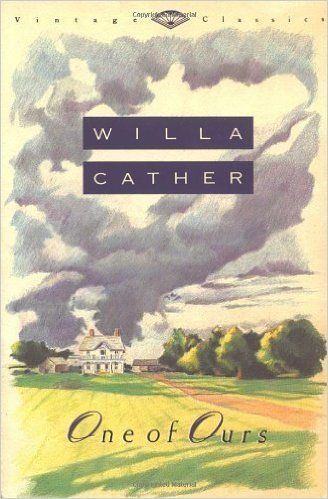 One of Ours is a surprisingly deep and powerful novel. In truth, it is two stories in one book, told in five parts: Book I “On Lovely Creek”, Book II “Enid”, Book III “Sunrise on the Prairie”, Book IV “The Voyage of the Anchises”, Book V “Bidding the Eagles of the West Fly On”. The title of Book V is taken from a Vachel Lindsay poem, a self-described “singing poet” from Chicago, Illinois. It is this poem which is featured at the outset of the novel.

At any rate, the first half of the novel focuses on the slow-pace of life in rural Franklin, Nebraska (Southern Nebraska) in the early 20th century. It tells the story of a restless young man, Claude Wheeler, whose father is a successful Nebraska farmer, a member of the early empire-building pioneers of the region. His mother is a devoutly pious Christian woman. However, his father’s success has left Claude feeling purposeless. Claude is sent to college at a Christian school, Temple College, only to transfer to the state University in Lincoln, where he thoroughly enjoys his studies but he still feels out of place. He is forced to return home when his father launches a new ranching venture in Colorado, so Claude takes over management of the Wheeler Ranch in Nebraska. Claude strikes up a romance with a local girl named Enid Royce, as she cares for him during recovery from an illness, and they are eventually married, though they are emotionally distant from one another. Enid becomes enamored with the temperance movement, women’s issues, and international Christian missionary work. Enid decides to leave Nebraska to care for her ill-ridden sister, a missionary in China. From this point on, Enid disappears from Claude’s life and again he feels lost.

The second half of the book changes the whole tone of the novel. Claude and his mother listen intently as news of World War I breaks, even reaching their rural ranching community. After Germany invades France, Claude enlists and he is sent across the ocean in a ship entitled the Anchises. Many men die from diseases on the voyage to Europe, and Claude befriends a doctor. Upon arrival, Claude is utterly amazed at the culture and architecture of Europe, though he does not partake in the sexual escapades of his compatriots with the women in France. Willa Cather beautifully describes the European towns as they march through, making it the adventure of a lifetime for a restless Nebraska boy. The novel gets more and more intense as Claude’s unit closes in on “the Hun” or “Fritz” as they call the Germans -they move through town after town and encounter various ambushes, losing men along the way. There is a memorably intense scene in which their Company takes the town of Beaufort, while German soldiers are hiding. Eventually Claude’s unit reaches the front and we experience the stench and mutilations of bodies piled up -the hideous monstrosities of trench warfare. Claude is tasked with holding the line, and he and his compatriots are all shot to pieces. Claude dies in battle, but curiously Willa Cather almost praises Claude’s death as the cure to his restlessness. In the closing chapter of the novel, we are returned to Franklin, Nebraska where life continues unmolested by the troubles of the world. Claude’s mother gets a call that her son has been killed and she privately grieves.

One Of Ours forces us to ask: Where does the pioneering spirit go when the frontier vanishes? Where does a man go when his life is entirely provided for him? Willa Cather bids us to answer: the “eagles of the west fly on” and find new frontiers, new conquering territories. The story of Claude Wheeler is like a tragedy, as the American dream is not enough for him -the farm, the family, and the marriage -are all insufficient for Claude. The full extension of his life is only realized when he faces his death on the frontlines of war in battle against the Germans.

One Of Ours was published in 1922 and was the Pulitzer Prize Winner in 1923. The novel was heavily criticized by other writers for its romantic portrayal of war -Sinclair Lewis, obviously no fan of the Pulitzer Prize, praised the early portions of the novel in Nebraska but he critiqued the second half for its war scenes. H.L. Mencken also savagely attacked the novel. And Hemingway, a man whose novels portray the bleak and demoralizing character of men in modern warfare, also found the novel to be an untrue account of war. One Of Ours has frequently been compared to John Dos Passos Three Soldiers, which paints a more brutally honest picture of the war. One Of Ours won the Pulitzer over Sinclair Lewis’s Babbit, after he had lost so controversially to Edith Wharton’s The Age of Innocence in 1921. The Pulitzer Committee only begrudgingly awarded the prize to Willa Cather, as the announcement explicitly came without “enthusiasm” and acknowledged that the novel is “imperfect” though they felt obligated to issue an award.

Apparently Willa Cather based the character of Claude Wheeler on a mixture of herself and her cousin, who lived on a neighboring farm in Nebraska. He was killed in Cantigny, France in 1918.

Who Is Willa Cather?

Willa Cather was born in Virginia in 1873 as Wilella Cather, but at age ten her family moved to the Nebraska prairie, eventually landing in Red Cloud, Nebraska, where most of her celebrated novels take place. She later went by the name “Willa”. She graduated from the University of Nebraska and worked in newspapers and as a teacher. When she was young she went through a period of dressing in masculine garb and cut her hair short, preferring the name “William”, but then regained her sense of self as she got older. This has led to a flurry of anachronistic scholars ‘searching’ for her lesbian identity, though this is mostly a desperate effort on behalf of a small group of modern scholars. It is true, however, that most of her close friends were women: such as Sarah Orne Jewett, a regional American novelist and short story writer. She first published poetry and short stories, but after the publication of her first novel, Alexander’s Bridge in 1912, she became entirely devoted to writing, with O Pioneers in 1913, The Song of the Lark in 1915, My Antonia in 1918, and Death Comes for the Archbishop in 1927. She died in 1947. She burned most of her personal correspondences throughout her lifetime, and her will expressly forbid any quotation or reprinting of her personal writings, however after the deaths of her last literary executors in 2013, a series of her letters were published. Despite anticipation, they revealed very little about her life. Today a prairie in Webster County, Nebraska is named after Willa Cather.

Here are some of my favorite passages from One Of Ours:

“Claude Wheeler opened his eyes before the sun was up and vigorously shook his younger brother, who lay in the other half of the same bed” -opening lines.

“The sun popped up over the edge of the prairie like a broad, smiling face; the light poured across the close-cropped August pastures and the hilly, timbered windings of Lovely Creek, -a clear little stream with a sand bottom, that curled and twisted playfully about through the south section of the big Wheeler Ranch” (Book I, Chapter I, pp.4).

“As for him, perhaps he would never go home at all. Perhaps, when this great affair was over, he would buy a little farm and stay here for the rest of his life. That was a project he liked to play with. There was no chance for the kind of life he wanted at home, where people were always buying and selling, building and pulling down. He had begun to believe that the Americans were a people of shallow emotions” (Book V, Chapter XIII, pp. 327-328).

“When the survivors of Company B are old men, and are telling over their good days, they will say to each other, “Oh that week we spent at Beaufort!” They will close their eyes and see a little village on a low ridge, lost in the forest, overgrown with oak chestnut and black walnut…buried in autumn colour, the streets drifted deep in autumn leaves, great branches interlacing over the roofs of the houses, wells of cool water that tastes of moss and tree roots. Up and down those streets they will see figures passing; themselves, young and brown and clean-limbed; and comrades, long dead, but still alive in that far-away village. How they will wish they could tramp again, nights on days in the mud and rain, to drag sore feet into their old billets at Beaufort! To sink into those wide feather beds and sleep the round the clock while the old women washed and dried their clothes for them; to eat rabbit stew and pommes frites in the garden, -rabbit stew made with red wine and chestnuts. Oh, the days that are no more!” (Book V Chapter XVII pp. 349-350).