Like Manet, Camille Pissarro (1830-1903) was an “elder statesman” of sorts for the young Impressionist movement, as well as for the future “Post-Impressionist” movement.

He was born Jacob Abraham Camille Pissarro in 1830 on the island of St. Thomas (a former Dutch colony, part of the “Danish West Indies”) to Portuguese-Jewish parents, with French nationality. Pissarro’s upbringing was highly unusual – his father initially came to St. Thomas to run his deceased Uncle’s business on the island. He then, controversially, married his Uncle’s widow (his Aunt) who became Camille Pissarro’s mother. This caused a huge stir in the small, traditionally Jewish community on the island. Young Camille went on to attend the all-black primary school on the island.

As a child, Pissarro’s father sent him to boarding school near Paris where Pissarro developed a passion for the French masters. After schooling, he returned to work in his father’s business on St. Thomas, until the age of 21 when he met a fellow artist, Fritz Melbye, a landscape painter, on the island and the two decided to leave and pursue a career in painting. They went to live in Venezuela and Pissarro eventually made his way back to Paris, where he formally studied art. 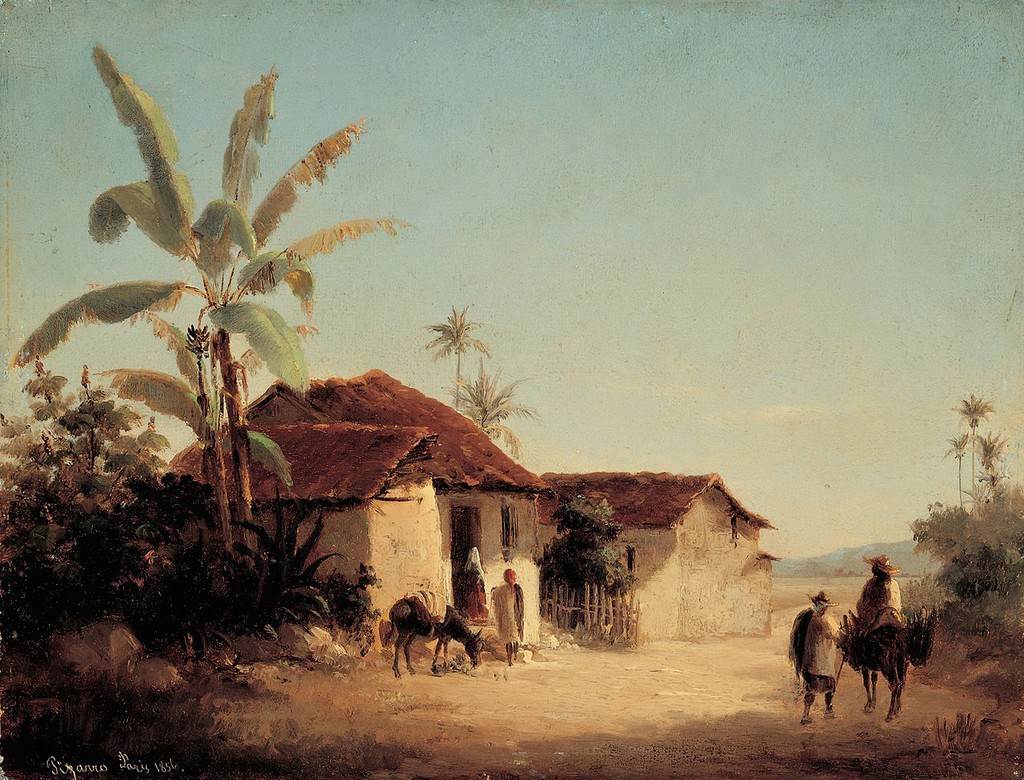 Some of his early paintings found success at the Salon, but he soon started experimenting with plein-eir styles, venturing out of the city to the picturesque French countryside painting farms and peasants. He drew swords with some of his contemporaries over his style, which often focused on the “realistic” or gritty and imperfect impression of landscapes and people. In 1863, the infamous Salon rejection was issued, however the only Impressionist artists that were accepted were: Pissarro and Cézanne. 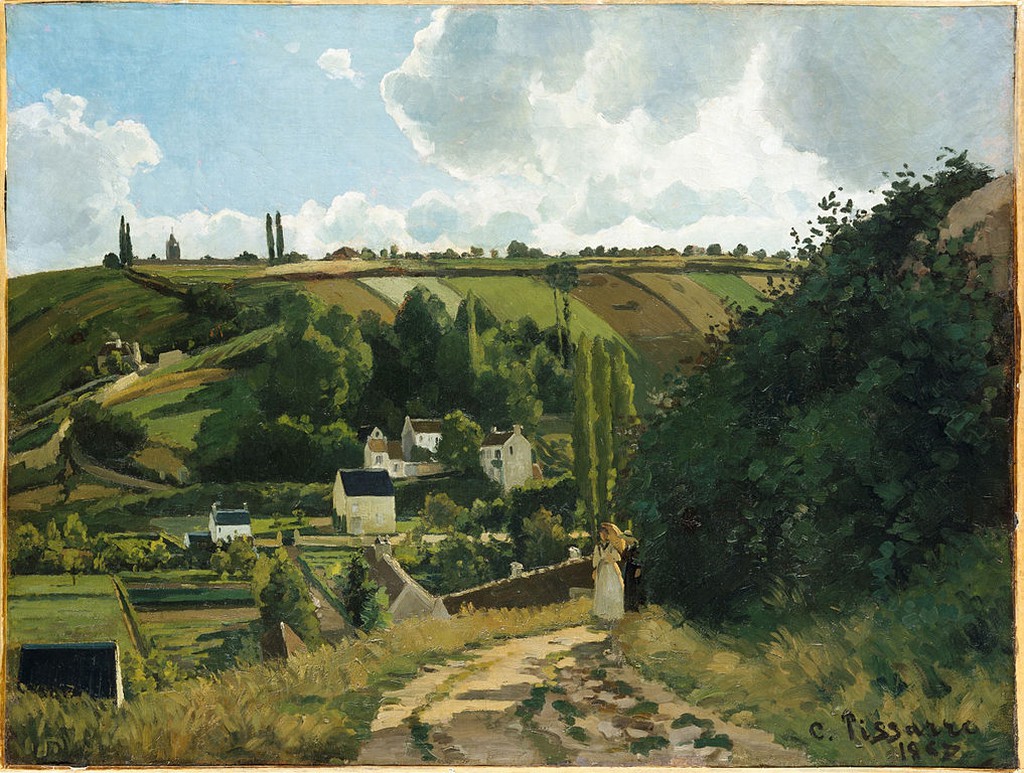 Jalais Hill, Pontoise (1867) – one of his more famous landscape paintings in Pontoise. It was displayed at the Salon in 1868. Note the two women walking around the bend in the foreground.

IN 1871, he married his mother’s maid, Julie Vellay. She was the daughter of a vineyard-grower. Together, they had seven children. They lived outside Paris in Pontoise and later in Louveciennes, where many of Pissarro’s famous paintings found inspiration. During the Franco-Prussian War (1870-1871) they moved to the London area. After the war, he returned to France to pursue new methods of painting. Upon returning to France he had discovered that only 40 of his initial 1,500 paintings survived the war (some were even used as doormats by soldiers). He was distraught and pursued new forms of painting, later dubbed part of the “Post-Impressionist” movement, but he also later abandoned this movement, as well. He has been called the “first impressionist” even though the guiding force for the movement more likely belonged to Monet. He was sometimes referred to as “Père Pissarro” (father Pissarro) by his Impressionist contemporaries. He is the only painter to have been featured in all of the Impressionist exhibits, remaining true to the cause, while others expanded their artistic horizons and left the infighting and disagreement within the Impressionist movement.

The Crystal Palace (1871) – painted during his time in London. 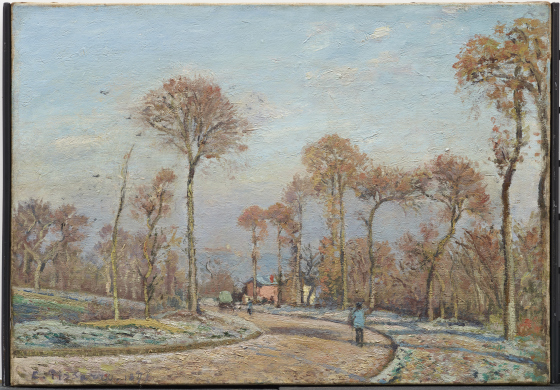 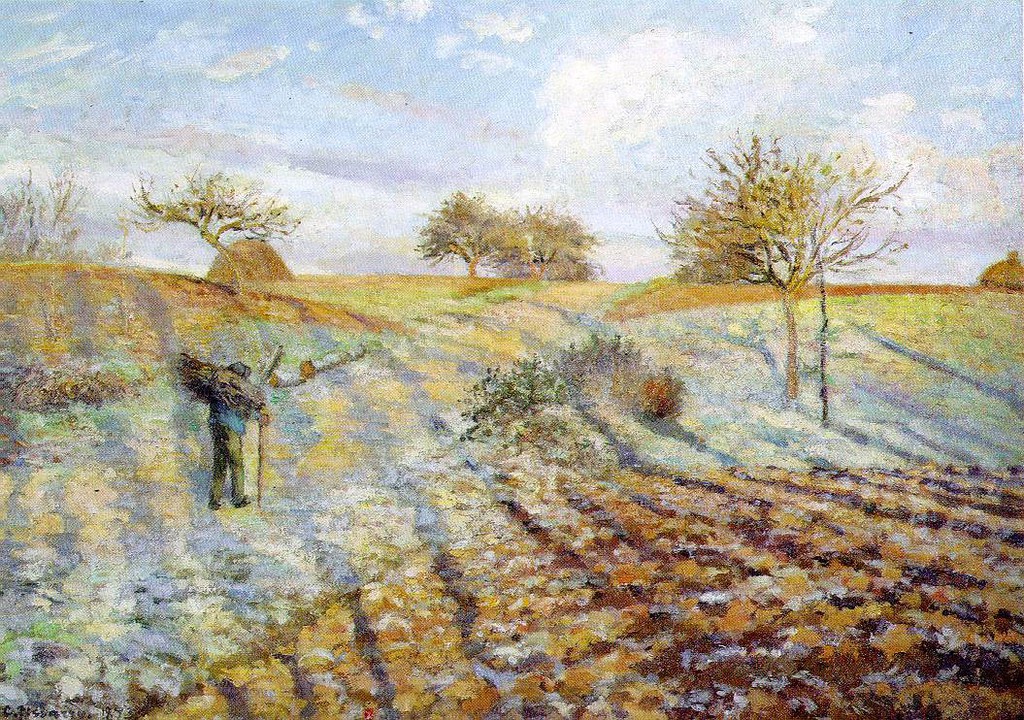 Hoarfrost (1873) – was displayed at the first Impressionist exhibit in 1874 in Paris. It marks a break with traditional forms of painting, as well as subject matter. In it, we see a simple, everyday laborer in the countryside, rather than a famous idea of a mythological figure or hero and so on. Sadly, Pissarro’s nine-year old daughter died shortly before the Impressionist exhibit, and his financial situation was dire. After this display, Pissarro rejected the Salon. 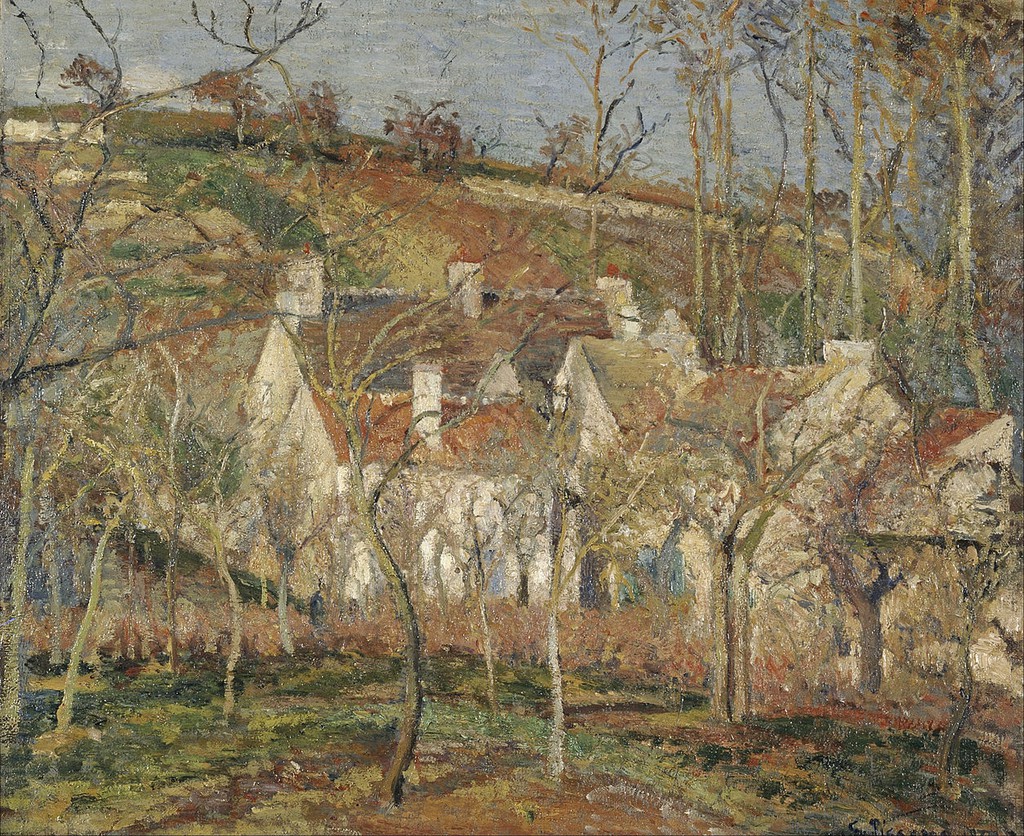 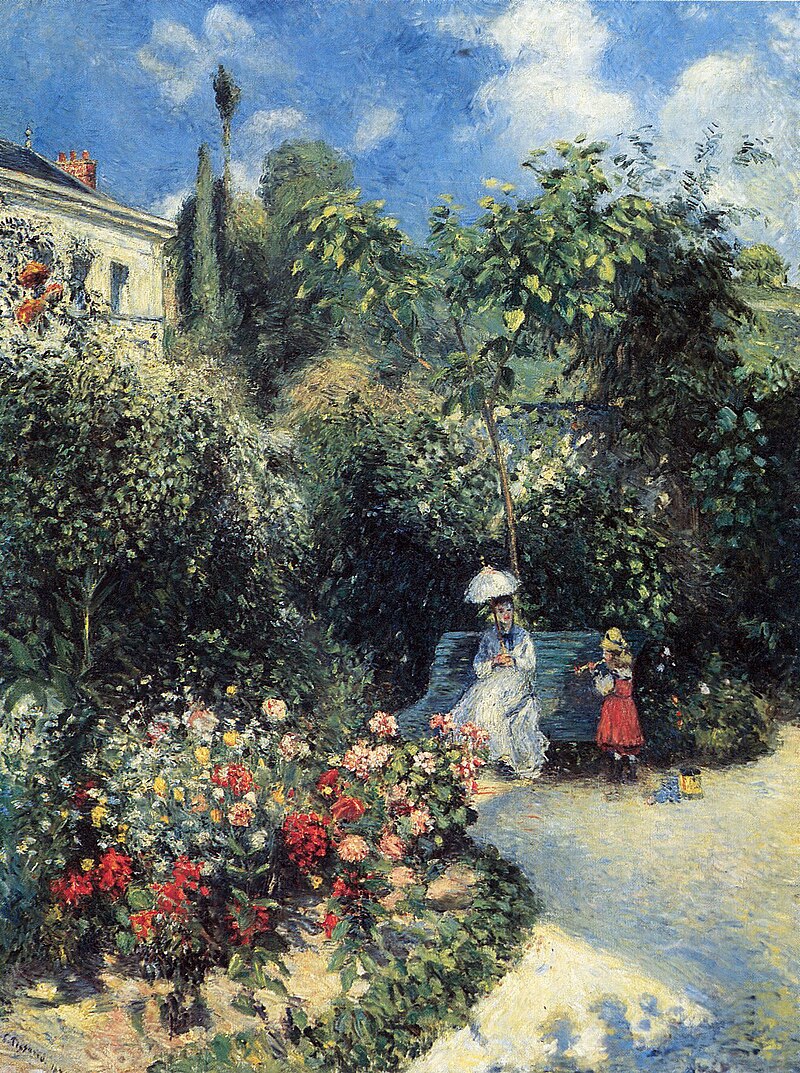 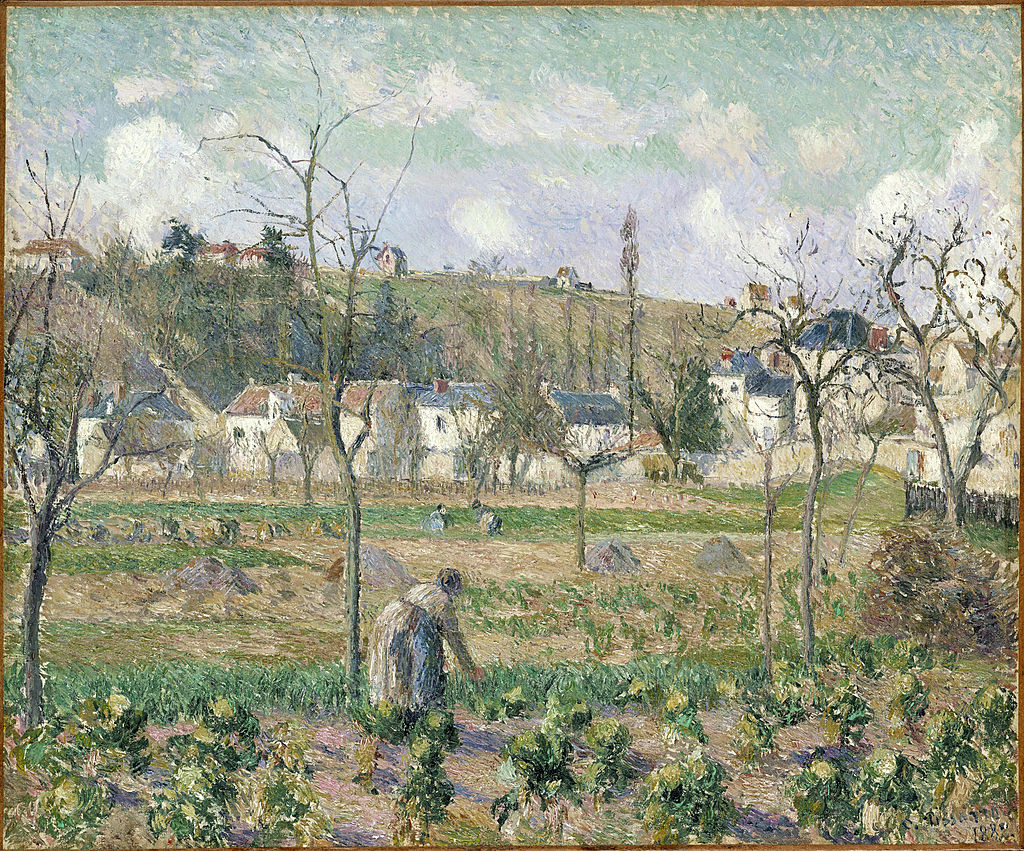 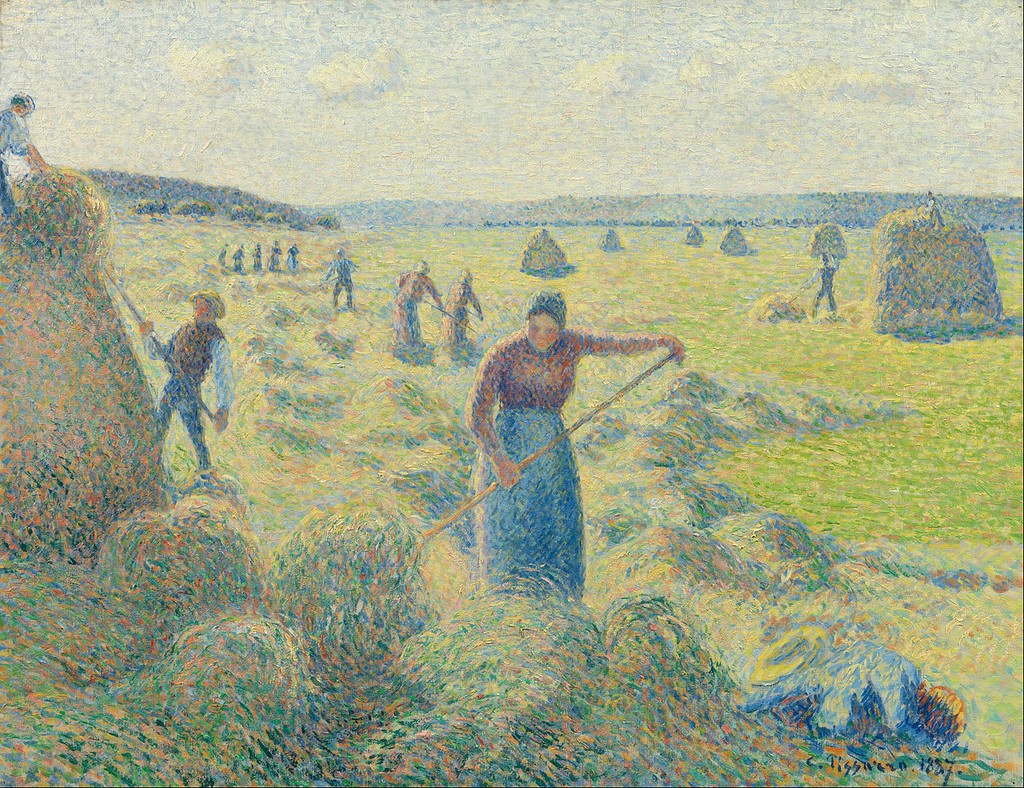 Pissarro was a teacher of many painters, including Gaugin and Cézanne. In 1884, art dealer Theo Van Gogh asked Pissarro to house his older brother, Vincent Van Gogh. The two developed a rapport, Pissarro was greatly impressed by Van Gogh, who was 23 years his junior, though Van Gogh never actually boarded with Pissarro. Unlike some of the other more fiery painters of the time, Pissarro’s personality was described as gentle, like a patient teacher. Interestingly enough, he was also enormously influenced by Japanese art, much like Monet. 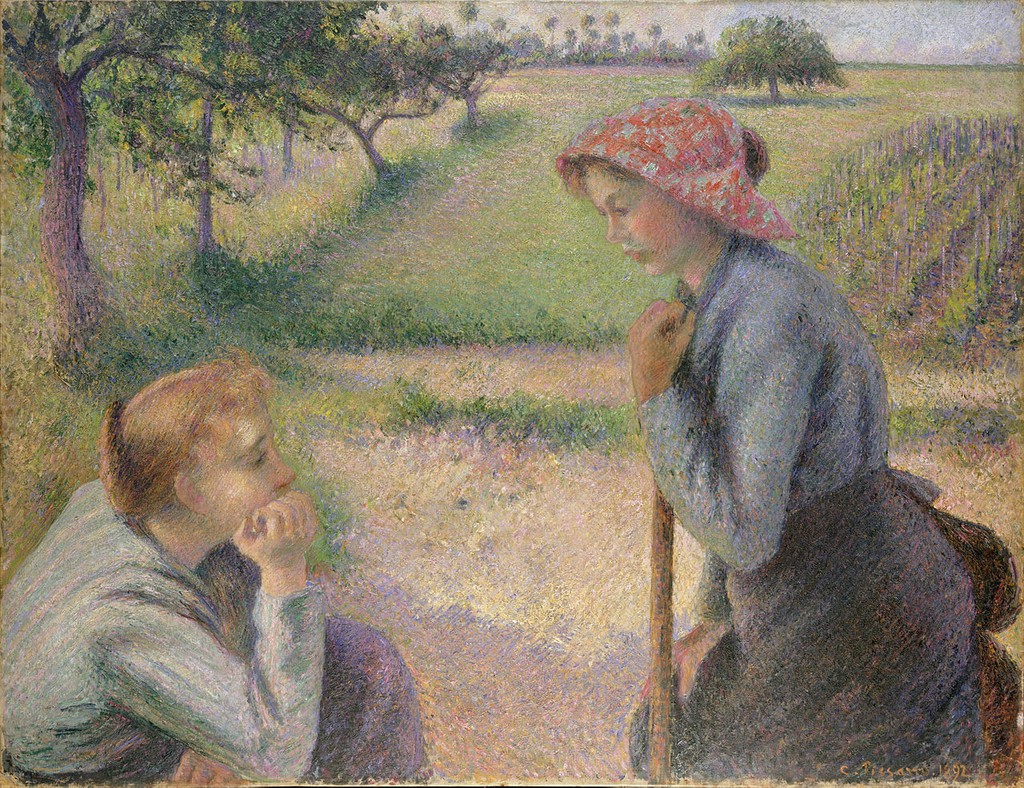 Two Young Peasant Women (1891-1892) – Pissarro used a blended form of pointillism in this painting. Unfortunately, the painting did not sell so he gave it to his wife, Julie Vellay. The woman portrayed on the left is Julie’s cousin. 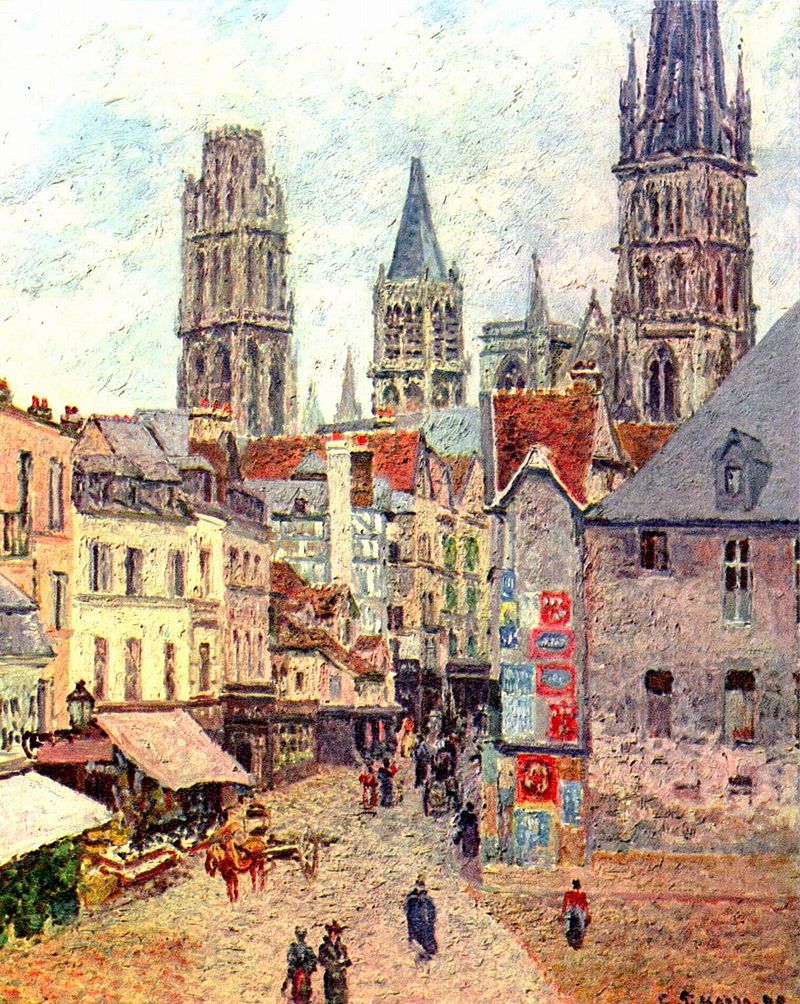 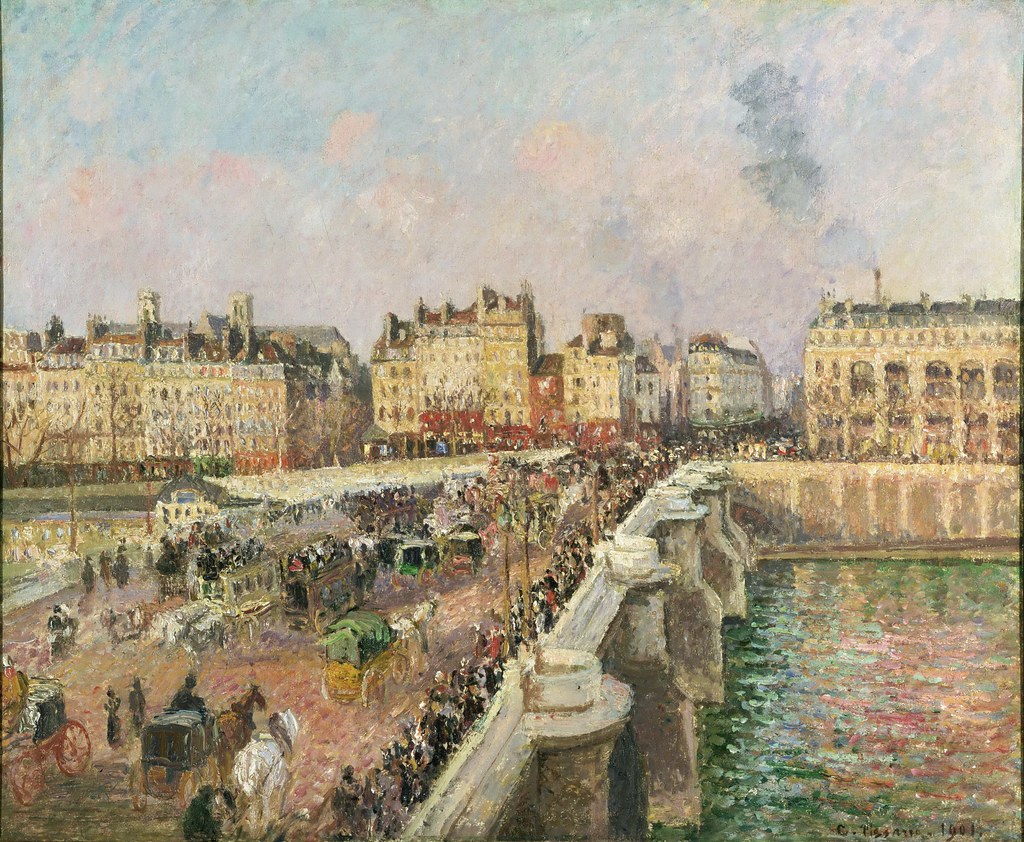 In his later life, he struggled with an eye infection and he lived in a variety of French hotels, until his death in 1903. Three of his sons went on to become Impressionist and Post-Impressionist painters.