Edgar Degas (1834-1917) (pronounced “day-dahs” but in later life he changed the pronunciation to “day-gah”) never wished to be called an “Impressionist” instead preferring to be called a “Realist.” In his paintings he was obsessed with motion, particularly of dancers, which occupied nearly half of his works.

Degas was raised in an upper middles-class family. He studied art from a young age, and was classically educated, though his father wanted him to study law. He started as a copyist and history painter, where he met Édouard Manet, until the outbreak of the Franco-Prussian War in 1870 which paused the momentum of the Parisian arts community. He enlisted in the National Guard.

After the war he visited family in New Orleans, Louisiana, but soon returned to France upon the death of his father. Degas’s brother had accumulated significant business debts, so Degas sold his inherited art collection to pay off his brother’s debt. For the first time in his life, Degas’s financial security was dependent upon the sale of his artwork.

During the 1870s, he joined up with the young Impressionist movement in rejection of the Salon, but he found himself in constant conflict with other Impressionists about the exclusiveness of the group. Degas had always wanted to include other non-Impressionist painters in the revolution. He also despised their rapid and unfinished style. Degas took careful time, working for extended periods of time, and he took a more classical approach to his works. 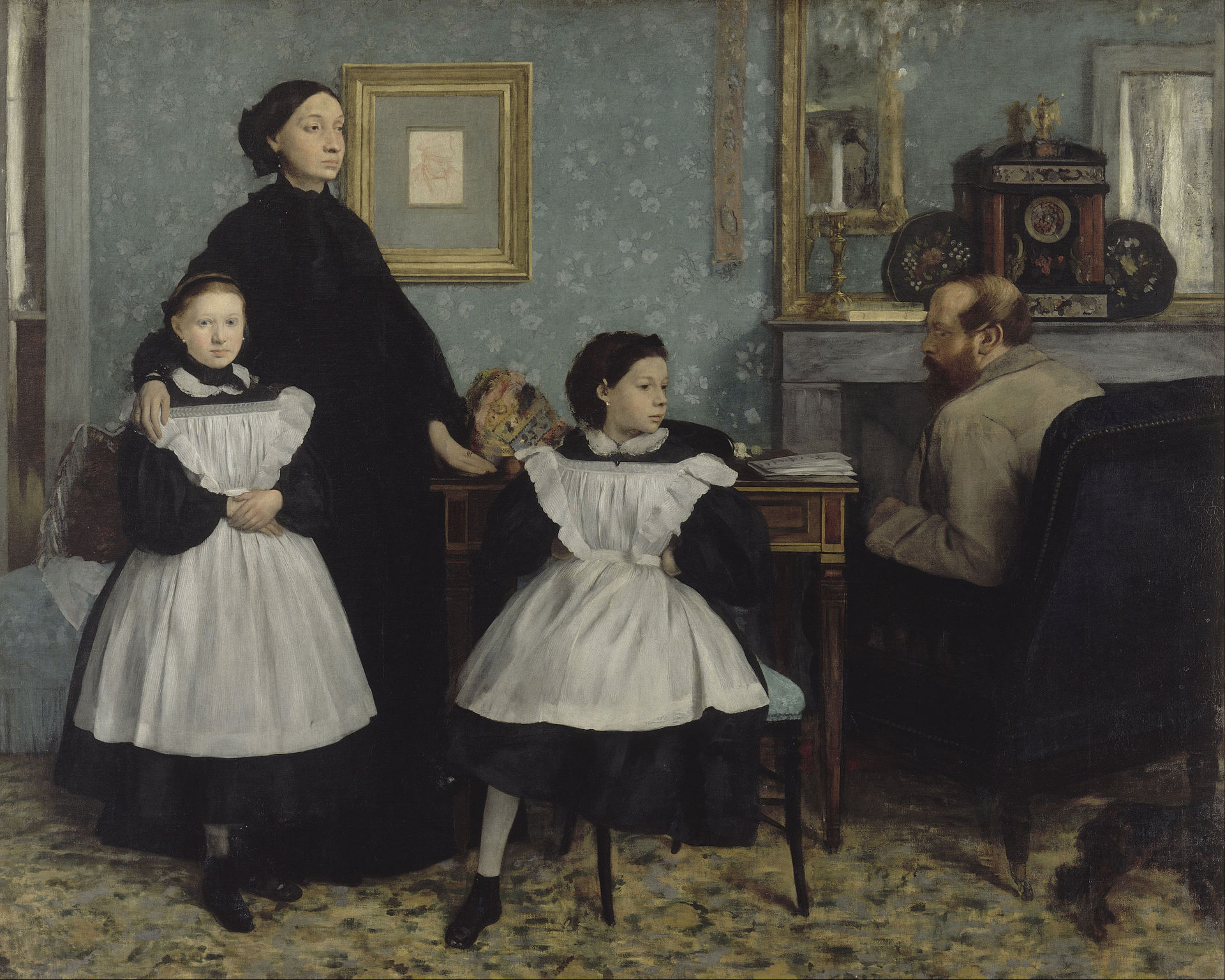 The Bellelli Family (1858-1867) -a massive and early masterpiece by Degas. It is a portrait of his aunt, uncle, and two young cousins. Like in Velázquez’s Las Meninas, Degas employs odd framing techniques. One of his cousins stares directly out of the painting at the viewer, while the two parents appear divided. Emotional and physical distance between the sexes is a theme Degas explores in many of his works. The portrait hanging on the back wall is of Degas’s recently deceased grandfather, while the family dog appears in the lower corner of the frame. 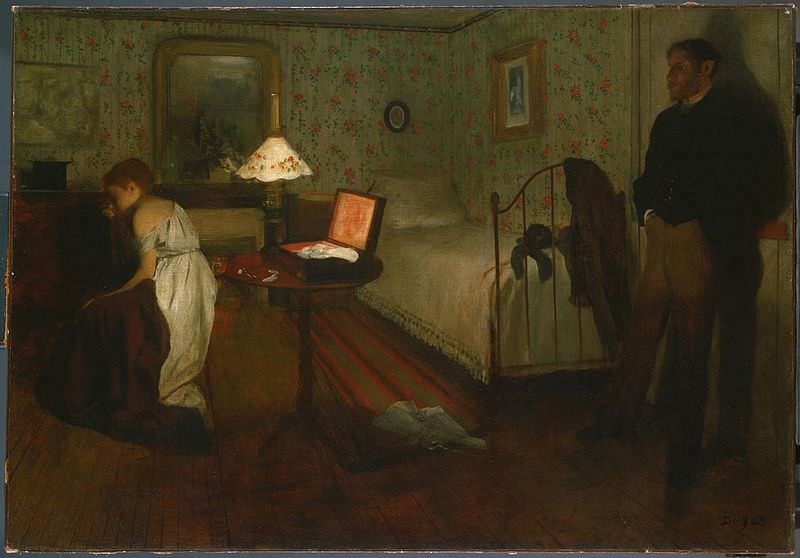 -Sometimes called “The Rape” it is one of Degas’s most dramatic and mysterious paintings. 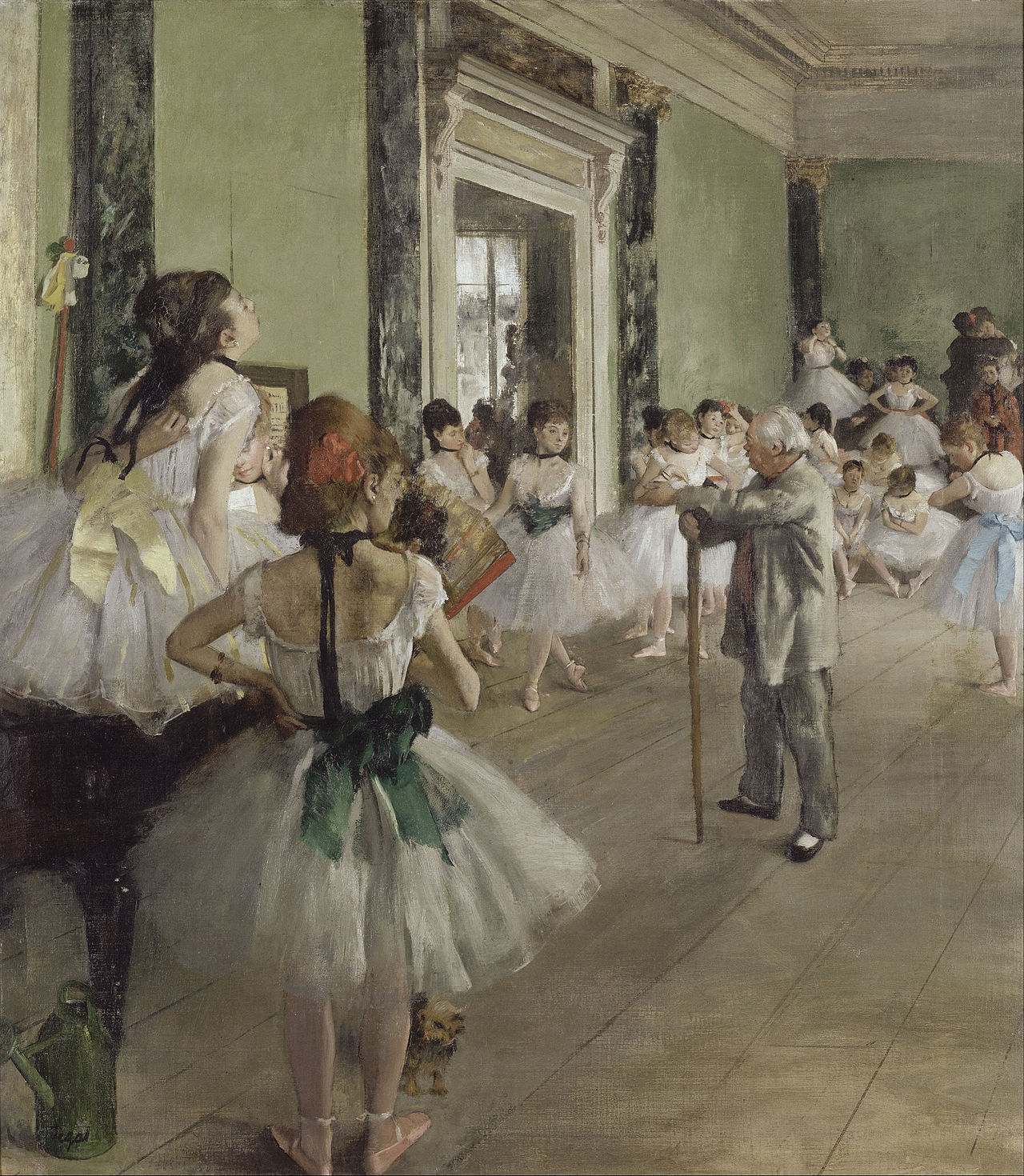 The Dance Class (1873-1876) -it depicts his friend Jules Perrot and his ballet dance class. Unlike other Impressionists who were focused on landscape “en plein-eir” artworks, Degas moved inward, focusing on particular subjects indoors.

Rehearsal on Stage (1874) – note: Degas had an extreme sensitivity to light in eyes. 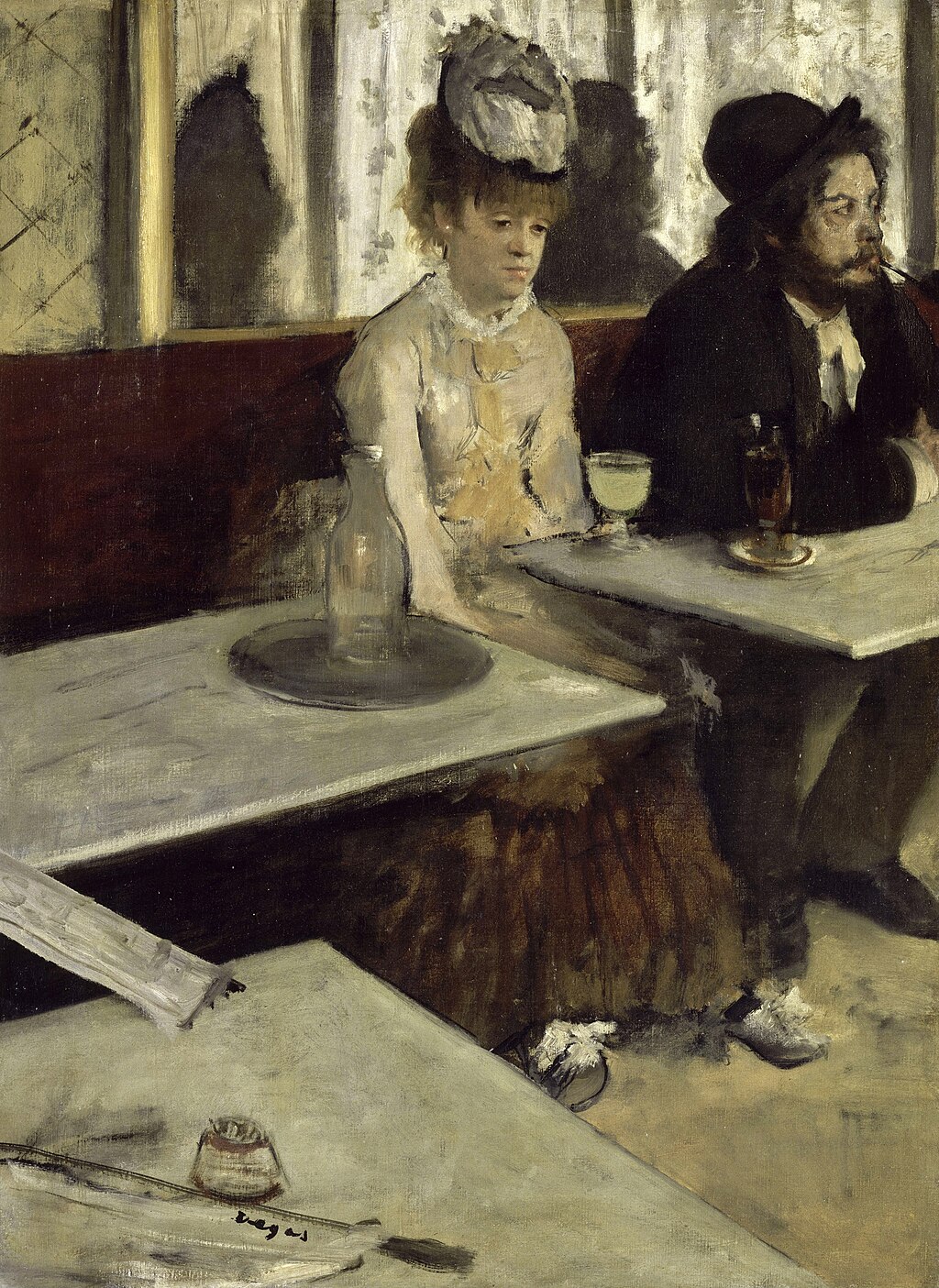 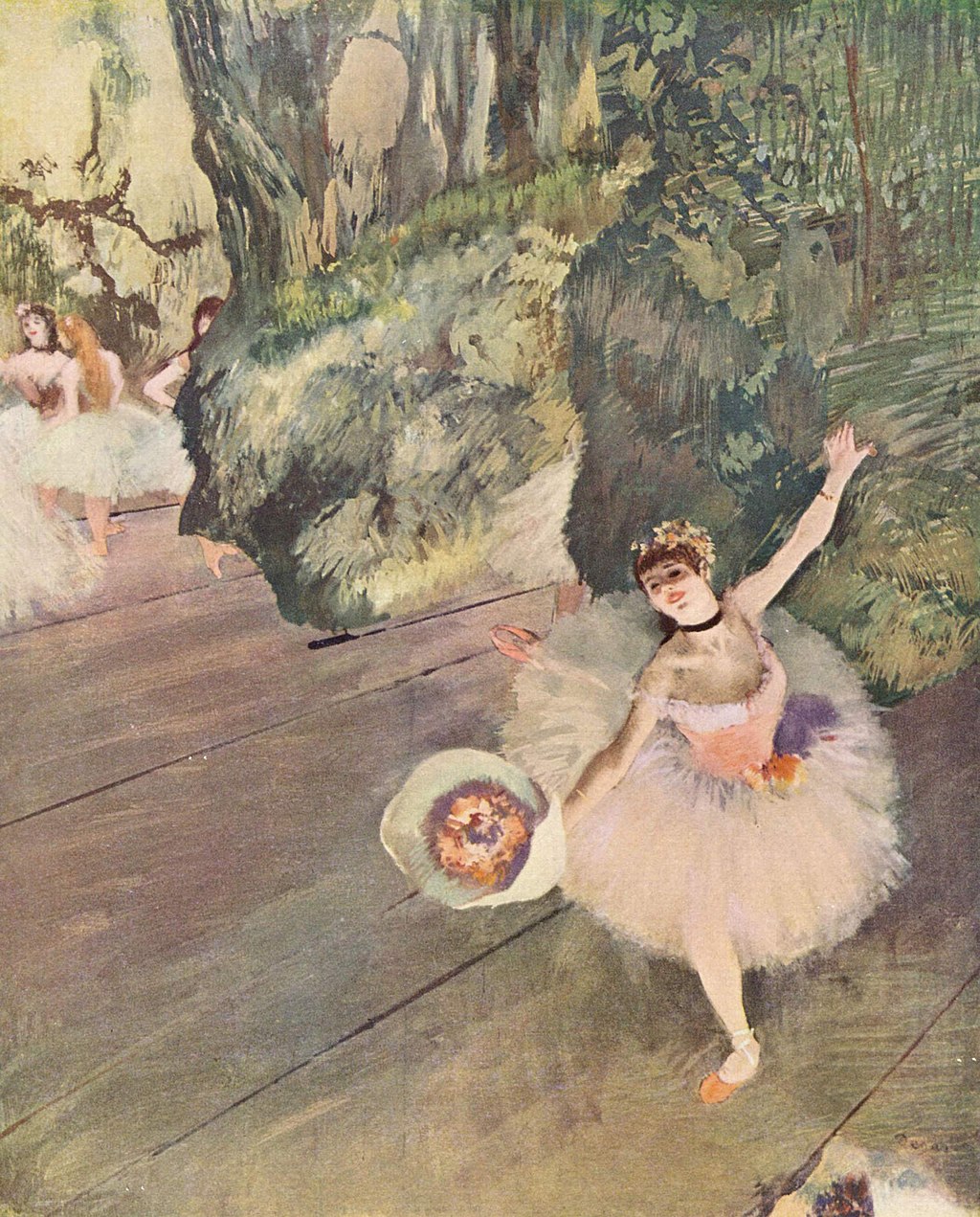 Dancer with a Bouquet of Flowers (Star of the Ballet) (1878)

As time went on, Degas became increasingly isolated, focusing on his painting, sculpture, and photography. He started going blind and lived like a recluse. He had a fiery personality with strong opinions, and he was friends with Mary Cassatt, another strong personality, for many years, but they eventually had a falling out over his antisemitism with regard to the Dreyfus-Affair. He believed an artist should live alone. He never married. He died alone at age 83. 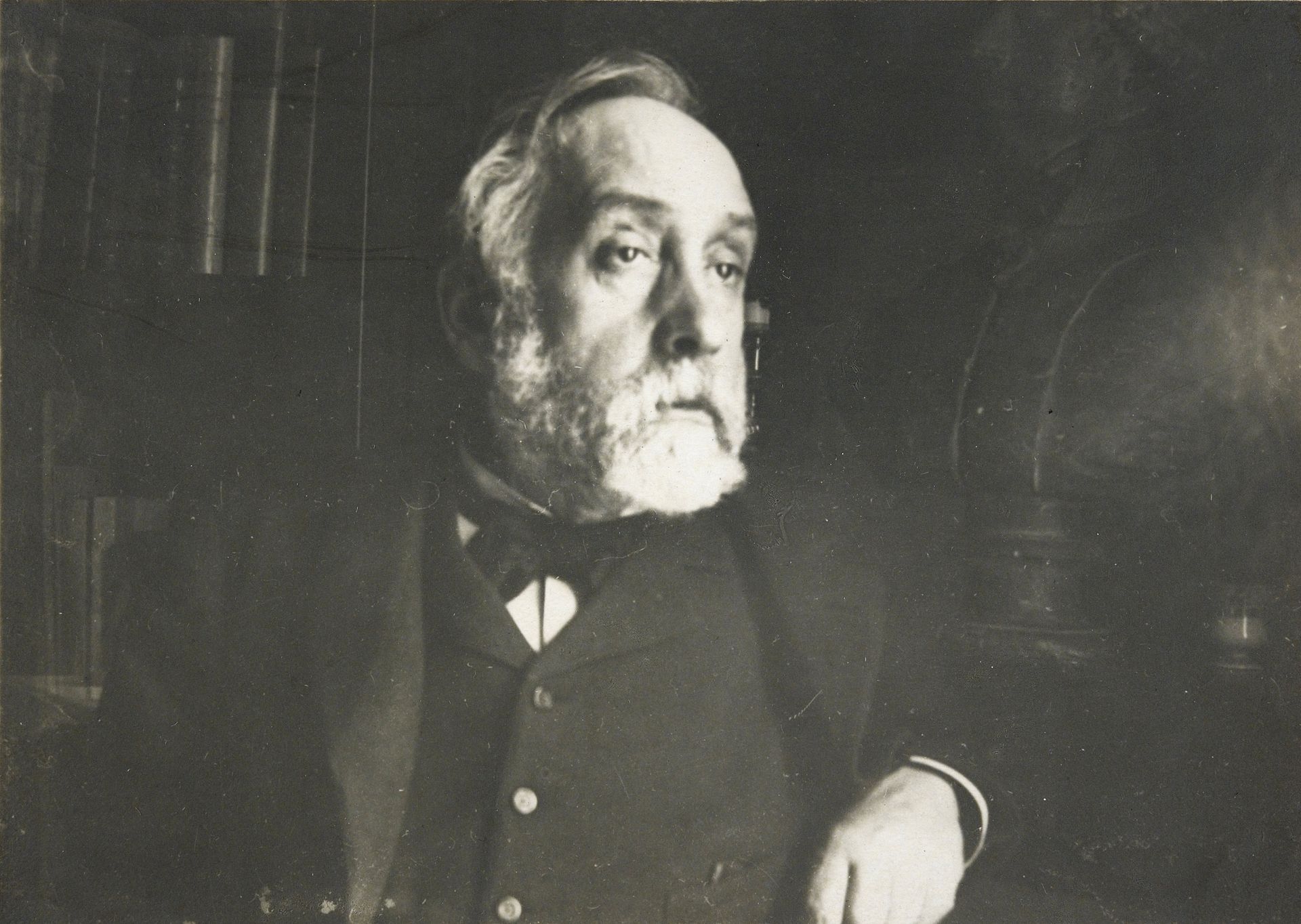