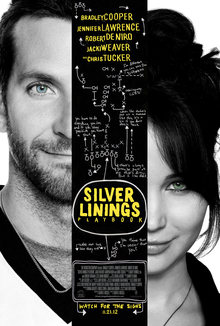 Silver Lingings Playbook is a surprisingly enjoyable film, despite showing all the trappings of being a mere romance film – it is uniquely dark and funny, providing a new twist on romance. Jennifer Lawrence and Bradley Cooper give terrific performances as people struggling with psychological challenges, and Robert De Niro delivers a funny performance, as well. The film was adapted from Matthew Quick’s 2008 novel of the same name.

Silver Lingings Playbook stars Bradley Cooper as Pat Solitano, a man struggling with bipolar disorder who is released from a psychiatric hospital only to move in with his parents in Pennsylvania (his father is played by Robert DeNiro). He hopes to reconcile with his ex-wife -he was initially sent to the clinic after he had a violent outburst when catching her in the shower with another man. He believes he sees life differently now -seeing the “silver linings” in everything. He meets a young widow who is also struggling with her mental health, Tiffany (played by Jennifer Lawrence). She promises to help him get back his wife if they join a dance competition together. After a series of events unfold involving the gambling of Pat’s father, Pat and Tiffany eventually wind up together, after Pat professes his love for Tiffany. They stop wearing their wedding rings and decide to embrace one another and all their quirks.

I found this film surprisingly charming. For her role, Jennifer Lawrence won the Academy Award for Best Actress –a well-deserved win.