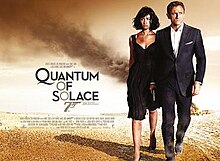 Quantum of Solace is the sequel to Casino Royale, the first Bond film starring Daniel Craig. The title for “Quantum of Solace” comes from a 1960 collection of short stories written by Ian Fleming, published in Cosmopolitan magazine. The plot of the film, however, is wholly distinct from Fleming’s stories unfortunately. Quantum plays out like a cheap plagiarism of the popular Jason Bourne franchise with disorienting quick cuts in the main action sequences, and it is hampered by a forgettable villain. Part of the problem with the movie is that it was in production during the height of the screenwriter’s guild strike in Hollywood, thus impacting its script-writing (apparently Daniel Craig himself came in to help tie up some loose ends in the script).

The film opens with Bond seeking to exact vengeance on those who indirectly caused the death of his lover Vesper from the dramatic end of Casino Royale. Here we see a chaotic, indecipherable chase scene in Siena, Italy obviously plagiarized from the Jason Bourne sequels. Bond has captured Mr. White -someone who keeps appearing in the Daniel Craig series. He brings Mr. White to M for questioning regarding an unknown organization called “Quantum” but then Bond and M are double-crossed by one of M’s bodyguards. Despite opposition, Bond chases the double-crosser down and kills him, then he and M search his flat in London which leads Bond to a hitman who is planning to kill a woman, Camille Montes (Olga Kurylenko), his new lover, and the trail leads them to Dominic Greene (Mathieu Amalric) in Bolivia, an unimpressive businessman who has a plan to stage a coup d’etat in Bolivia via a complex plot to control the country’s water supply. This leads Bond to an organization that once employed Vesper, “Quantum of Solace.” Bond is tracked down by another MI6 agent, “Strawberry Fields” (Gemma Arterton) intending to bring him back to London but she is brutally killed. We find her dipped head to toe in oil (a nod to the iconic scene in Goldfinger). Bond and Camille infiltrate Greene’s desert lair in Bolivia and stop his political plot. Camille exacts vengeance for what Greene’s organization did to her family, and Bond takes Greene out to the remote desert where he tortures him for information about Quantum and then leaves Greene alone with a can of oil in the middle of the desert. According to M, Greene was later found shot with two bullets in the head and with oil found in his stomach.

In an epilogue to the film, Bond tracks down his Vesper’s paramour, a man who seduces women in order to gain access to influential people. We are led to believe Bond tortures him before leaving the man to be arrested by MI6. Meanwhile, M approaches Bond and asks him to rejoin the ranks of MI6 now that he has taken vengeance for the death of Vesper. Bond agrees and he drops Vesper’s old necklace into the snow as he returns to M16.

The lead song is sung by Jack White, called “Another Way To Die” -sadly this is not the best in the Bond series (coming from a Jack White fan). Quantum is known for being the most violent in the Bond saga -it contains significant echoes of the Bourne films, with dizzying cut-scenes and brutal scenes of torture. In this way, Quantum is not at all like a Bond film -there is no Q nor MoneyPenny, and the villains are all ordinary, mediocre men, mostly small-time criminals. The only memorable scene in the film is the wild car chase at the beginning of the film, otherwise it is mostly forgettable. Quantum is one of the more confusing Bond films, surely not one of the best. It is a sophomoric follow-up to Casino Royale.