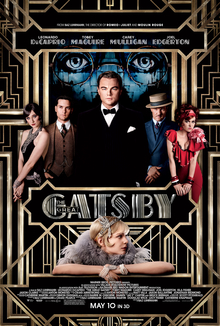 This adaptation of The Great Gatsby takes considerable liberties from F. Scott Fitzgerald’s far superior novel. It is a forgettable and unfortunate cinematic version of an otherwise the brilliant novel. I was truly disappointed in this orgiastic homage to modern indulgence.

Leonardo DiCaprio plays Jay Gatsby and Tobey Maguire plays Nick Carraway. We all know the plot of the brilliant book by Fitzgerald – a tale of lost dreams and elusive romances centered in Long Island, New York, told against the backdrop of the Roaring Twenties and the nouveau riche. It is surely a mildly entertaining film -it’s just not The Great Gatsby. The set for Gatsby’s mansion in this film was actually shot in Wales.

It won a couple of Academy Awards for costume and set design, but the acting in the film is wholly forgettable. The towering modern set designs (as well as the contemporary soundtrack featuring Jay-Z and Kanye West) distract from the significance of the novel. It is revisionist to the core in a vague attempt to highlight financial greed past and present. Ultimately the film is simply poor and entirely forgettable.