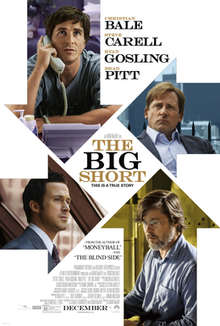 The Big Short is based on Michael Lewis’s famous book of the same name. The film stars Christian Bale, Steve Carell, Ryan Gosling, Brad Pitt, and others.

The Big Short is a well-told film, with actors routinely breaking the fourth wall to explain the complicated financial instruments to the audience. It playfully explores a complicated financial dilemma as it unfolds, Ryan Gosling typically serves as the main narrator. It is also filled with plenty of cameos of other famous actors. Both Christian Bale and Steve Carell deliver excellent performances.