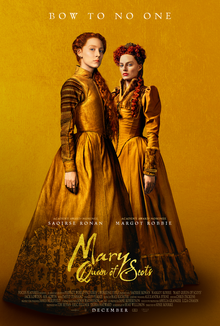 The tragic story of Mary Queen of Scots has been played out many times -the story of a woman who fought for power, trying to move the appropriate chess pieces, however in the end, she loses her love and her life. Her political life is greatly overshadowed by her nemesis, Queen Elizabeth I. This adaptation of her story was directed by newcomer, Josie Rourke.

In this somewhat historically revisionist account, Mary Queen of Scots is not portrayed as a failed politic, but rather the fault is placed at the feet of the incompetent men in her life. Saoirse Ronan plays Mary. The tumultuous Scots never fully accept Mary for her devout Catholicism, her marriage to a Frenchman, and radicals like John Knox arise and rattle the people. She is betrayed several times, including by her own husband who is portrayed as a a licentious and self-hating drunken homosexual. She eventually meets her cousin Elizabeth face-to-face (which never happened in truth), shortly before she is betrayed and executed, as a result of political pressure upon Elizabeth. She leaves behind her son, James, who will one day rule both England and Scotland.

The film’s script was constructed based on John Guy’s biography. Scarlett Johansson was initially slated to play the lead, but after she backed out the film languished for years. Among the many inaccuracies in the film, Mary likely had a French accent (not Scottish) having grown up in France, there pretty much was only rivalry between Elizabeth and Mary from the start (not friendship), among other falsities. The film did not receive particularly favorable reviews for its many inaccuracies.

The redeeming qualities of the film are Ronan’s acting, as well as Margot Robbie’s grizzled performance as Queen Elizabeth I, and the incredible panoramic scenery of the Scottish countryside and castles. However, it suffers from an attempt to infuse 21st century moral judgments on 16th century medieval court (notably with the tragic but w anachronistic situation relating to Mary’s attendants, one a gay man). The film is nothing spectacular but calls for a much-needed reconsideration of the life and legacy of Mary Queen of Scots.