Clement of Rome is rumored to have been a disciple of Peter. He later became the representative, or “bishop,” of Rome, holding that office from about 88 AD until his death in 99 AD (per Tertullian). He was praised among many of the early Christian church leaders. Clement is considered an apostolic father of the early church, along with Polycarp and Ignatius of Antioch. Today, he is venerated as the fourth Pope in the lineage descending from Peter, though Tertullian considered him the immediate successor of Peter. His only surviving extant writing is his letter to the church at Corinth. Tradition holds that Clement was captured and imprisoned under the reign of the Emperor Trajan. While in prison, Clement ministered to his fellow prisoners. He was martyred by being tied to an anchor and cast into the sea. For this reason, he is often considered the patron saint of mariners. 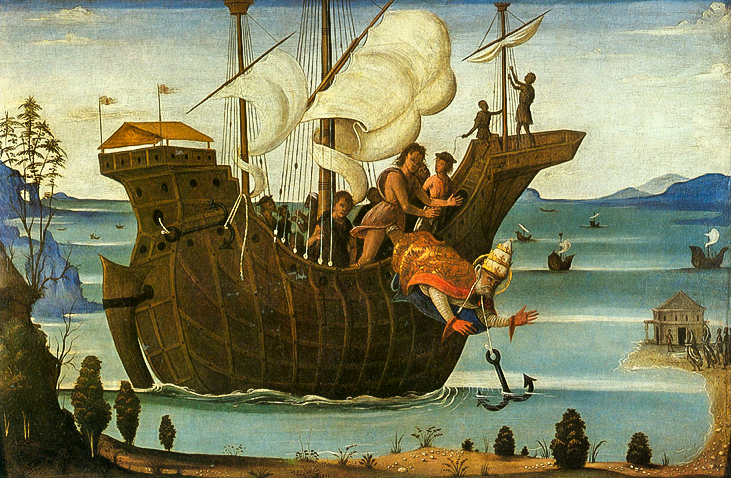 This is a 1480 Italian painting by Fungai of the martyrdom of Pope Clement.

The early church was scattered and did not have a fixed lineage of church authorities. The Liber Pontificalis (Latin for “Papal Book” or “Book of the Popes”) offers a list of biographies of the papacy leading from Peter to the 15th century. It lists Clement as the chosen successor to Peter, though Peter also had two other “bishops” do his bidding in Rome. Today, we call these two men: Pope Linus and Pope Cletus (or Anacletus) the two popes who are often listed as preceding Clement.

There is a tradition of early Christian Romance literature called the “Clementine Literature” (Clementine Homilies, Clementine Recognitions and so on) which portray Clement as a hero and the vessel through which the surviving apostles of Jesus disseminated their teaching to the churches. Clement is referenced in the writings of Paul as a fellow traveler in the faith, and Clement is also referenced in Shepherd of Hermas.

His first (and perhaps only authentic) letter is directed to the Corinthians, though it was written anonymously. Apparently Corinth was a rowdy group of early church-members, as also evidenced in both of Paul’s letters pleading with Corinth to love one another.

Clement’s letter was well-celebrated in the early. It was frequently read aloud along with Paul’s epistles in the early church. It is considered one of the oldest Christian texts aside from the writings of Paul and the gospels. It has been variously dated to 75 AD or even 96 AD.

The letter is intended on the one hand to praise the humility and honesty of the church at Corinth, but also to excoriate their rebelliousness in overthrowing their elders and authorities as a result of an envious coup. Clement reminds them of envy, citing a number of biblical stories, such as Joseph, and Cain and Abel. Clement cites the martyrdom of Peter and of Paul (who was imprisoned seven times). Envy is the way of the world and it has brought great strife to the nations of the world. Clement begs them to look to the example of holy men throughout history for examples of how to behave with humility and hospitality. His plea is for order, following in the holy example of Jesus. It is similar in purpose to Paul’s letters to the Corinthians.