Everything we know about Ignatius, “Bishop” of Antioch (southern Turkey), comes down to us through rumor. He is often referred to as one of the “Apostolic Fathers” – along with “Pope” Clement I, Polycarp, and also Papias. Perhaps Ignatius converted to Christianity at a young age. Tradition holds that Ignatius was a friend of Polycarp, and that both were pupils of the Apostle John. Eusebius, the 4th century Christian historian, identifies Ignatius as the bishop of Antioch (perhaps appointed by Peter). Ignatius often referred to himself as Theophorus (meaning “God-Bearer”) in his writings and letters. Another tradition holds that Ignatius was one of the children embraced by Jesus in the Gospel (Matthew 18:21), but this account is surely spurious.

As with all other early Christian founders, the mythology surrounding Ignatius’s martyrdom is the most interesting part of his life. The emperor Trajan was fresh off the backs of a successful military conquest and he ordered all faiths to come together and worship the gods of Rome. Ignatius defiantly stood against this edict (he may have been brought before the emperor at one point) so he was given a particularly cruel punishment for his insolence. He is said to have been escorted by a cohort of ten Roman soldiers from Antioch to Rome (an anachronism as heretics were usually martyred in their home towns, not taken to Rome). They traveled a long route, apparently, so that Ignatius could converse with numerous Christian churches while in chains en route to Rome. This occurred, perhaps, during the reign of the emperor Trajan. Ignatius, Eusebius, and Jerome all testify that Ignatius was thrown to the “beasts” in Rome, perhaps he was killed during the gladiatorial games at the Colosseum. 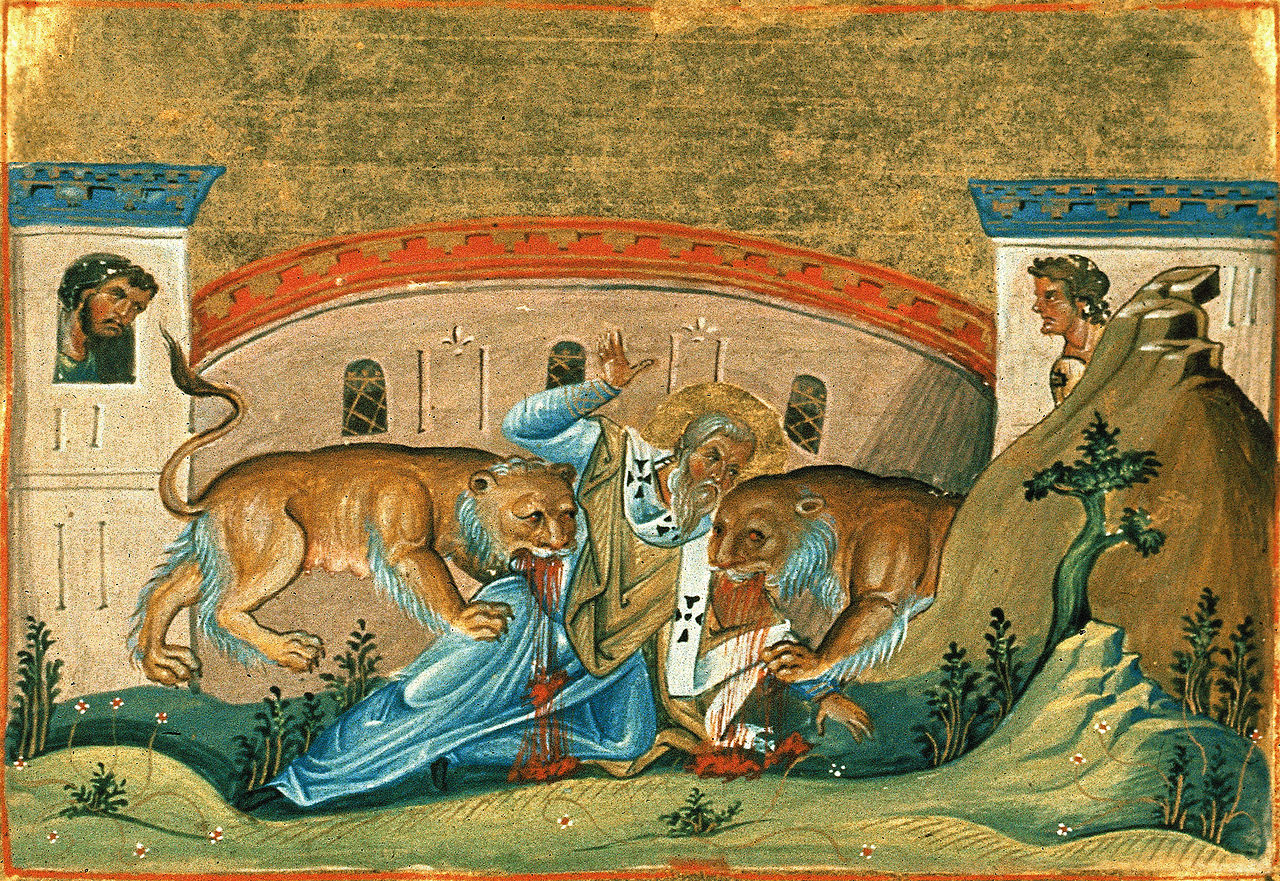 A depiction of Ignatius’s martyrdom from around 1000 AD.

Seven epistles have come down to us as the writings of Ignatius, though they are likely as inauthentic as the supposed Martyrium Ignatii, a professed first-hand account of Ignatius’s martyrdom by two of his companions: Philo of Cilicia, the deacon at Tarsus, and Rheus Agathopus, a Syrian man. Ignatius may have been born around 35 AD and killed sometime in the early 100s AD. Eusebius confirmed that Ignatius was fed to “wild animals” which was the verdict recounted in Ignatius’s letters.

The seven surviving epistles that have been attributed to Ignatius are as follows:

I recently thumbed through these seven letters. Five are addressed to Christian churches in Asia, one to the church in Rome, and one to Ignatius’s compatriot, Polycarp. It has been suggested that none of these letters could have been written before the 4th or 5th century. The letters are said to contain the early framework for Catholic doctrine (Catholic coming from the Greek word “Katholicos” meaning “universal” or “all-encompassing” and “all-inclusive”). Like Paul’s letters, Ignatius’s letters also seek to establish order and authority throughout the fledgling church.

The epistle to Polycarp is sometimes considered the earliest. In it, Ignatius offers warmth and guidance to Polycarp, and a plea for gentleness as well as humility. He praises the peace of the church of Antioch and tells Polycarp that he must travel from Troas to Neopolis at the will of the emperor. Ignatius is being led from Antioch to Rome to be killed.

In his letter to Smyrna (recall Polycarp was from Smyrna), Ignatius offers a reminder of the suffering of Jesus, the need to obey the bishop, and internal requests, such as to send a messenger to Antioch. In countering the heretics in the letter, Ignatius affirms that Jesus rose from actually being dead and then ascended into heaven, rather than the claims of some that Jesus merely “appeared” to come back to life (i.e. doceticism).

In his letter to Philadelphia, Ignatius again encourages the authority of the bishop and prays for the church to avoid schisms. It was written during his transportation to Rome. He commands the church to partake of only one body and blood of Jesus (Eucharist). Interestingly enough, he also refers to the New Testament as superior and preferable, more transcendent, than the “Old Testament.” Jewish law (Torah) must be overtaken by Christian doctrine.

In his letter to the Romans, Ignatius refers to himself as a “prisoner” and he asks not to be saved from his certain martyrdom in Rome because he wants to ascend to be with Jesus. It takes place (again) during Ignatius’s transportation from Asia to Rome. The letter was written prior to his arrival as a prisoner in Rome. He longs for his own death, so that he may be a martyr and imitate the death of the savior.

In his letter to the Trallians (Tralles was an ancient Greek city located in Turkey), Ignatius chastises the hypocrites and the heretics. As with the others, this letter was written while he was being transported from Antioch to Rome to be killed (by being devoured by wild beasts). He makes reference to the divinity of Jesus, being descended from David, and also that he rose from the dead. He includes another polemic against those who merely claim Jesus “appeared” to rise from the dead (Docetae).

In his letter to the Magnesians (located in western Turkey), Ignatius praises order, harmony, obedience to their bishop, and condemns heretics and sowers of disharmony on the church. He warns against “Judaizing.” He advises that people observe the “Lord’s Day” (Sunday) rather than the Jewish Sabbath. Perhaps, as with the controversial Marcion, we see a certain rejection of Judaism in whole by Ignatius. The letter appear to take place shortly before Ignatius’s death.

Lastly, in Ignatius’s letter to Ephesus (located in Western Turkey), Ignatius praises Ephesus and warns them against false teachers, however this letter contains a slightly different tone, in later referencing three “mysteries” relevant to Jesus – his virgin birth, a star that shown forth for his birth brighter than the moon and all other stars, and his triumph over death, thus destroying wickedness and darkness.

There are, in fact, fifteen epistles that have come down to us through the Ignatian literature, however some are epistles to Mary (mother of Jesus) and other similar accounts that strain credulity. Some only exist in Latin.

Here is a section of the Roberts-Donaldson introduction to the Ignatian epistles:

“Supposing the letters of Ignatius and the account of his martyrdom to be authentic, we learn from them that he voluntarily presented himself before Trajan at Antioch, the seat of his bishopric, when that prince was on his first expedition against the Parthians and Armenians (a.d. 107); and on professing himself a Christian, was condemned to the wild beasts. After a long and dangerous voyage he came to Smyrna, of which Polycarp was bishop, and thence wrote his four Epistles to the Ephesians, the Magnesians, the Trallians, and the Romans. From Smyrna he came to Troas, and tarrying there a few days, he wrote to the Philadelphians, the Smyrnaeans, and Polycarp. He then came on to Neapolis, and passed through the whole of Macedonia. Finding a ship at Dyrrachium in Epirus about to sail into Italy, he embarked, and crossing the Adriatic, was brought to Rome, where he perished on the 20th of December 107, or, as some think, who deny a twofold expedition of Trajan against the Parthians, on the same day of the year a.d. 116.”