“I turned 40 and I guess I’m having a life crisis or something.” 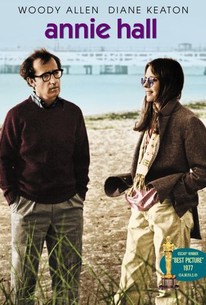 Annie Hall is Woody Allen’s magnum opus. It is a rare film which can be both technically sophisticated, experimental, and yet also beautiful and sentimental. Unlike Allen’s prior comedies which are riddled with goofiness, absurdity, and sexual innuendo, Annie Hall reflects a more mature and serious director (though to be fair many of Woody Allen’s early comedies are terrific). Annie Hall is filled with modern psychoanalytic themes, religious (particularly Jewish) topics, and great visuals of Long Island, New York.

The plot of the film is surely semi-autobiographical as both Woody Allen and Diane Keaton’s relationship was blossoming offscreen (they lived together). The story is simple. It is about Alvy Singer (Woody Allen), a somewhat successful stage comedian. He presents his film to the audience by breaking the fourth wall at the outset (he periodically and hilariously breaks the fourth wall throughout the film). He seeks to discover the reasons why his relationship with Annie Hall fell apart (played by Diane Keaton, whose surname was actually “Hall” and her nickname was “Annie”). Alvy opens the film with: “I turned 40 and I guess I’m having a life crisis or something.” Alvy also quotes Groucho Marx’s line about club membership. He introduces us to his past -he was an unusually curious child, embracing his sexual interests at an early age, and he wonders where some of his young classmates are today. Then we meet Alvy and Annie together. They are on a date to see the film, The Sorrow and the Pity, an extended two part documentary about the partnership between the French Vichy government and Nazi Germany. They stand in front of an Ingmar Bergman poster. While in line, a loud, pseudo-intellectual is loudly pontificating behind them, complaining about the “indulgence” of Frederico Fellini and Marshall McLuhan. Alvy confronts him and then breaks the fourth wall by randomly pulling McLuhan into the line to confront the pontificator, to whom he says: “I heard what you were saying. You know nothing of my work. You mean my whole fallacy is wrong. How you got to teach a course in anything is totally amazing!” Alvy glances at the audience and slyly says: “Boy, if life were only like this!” This is surely one of the greatest moments in the film – brilliant!

However, we also get a glimpse into the troubles facing Annie and Alvy, as well as their extreme neuroses. They discuss their former lovers (Alvy has been married twice before) and we get glimpses into joyful moments for the couple making lobster dinner. Then, we get a flashback to the start of their relationship – playing doubles tennis. Alvy seems more confident at the time, and Annie seems more shy and awkward. It is innocent. Gradually they become more intertwined. They visit each other’s parents homes – at the Hall house Annie’s grandmother clearly despises Jews and Alvy imagines himself as an Orthodox rabbi at the table. Eventually, Annie Hall moves in with Alvy, but they become complacent and they start to discuss “flexibility” in their relationship. Alvy sees her arm in arm with a professor, and he becomes insanely jealous and Annie becomes upset that he was spying on her. Also, Annie is pursued by a record producer, Tony Lacey (played by Paul Simon) from Hollywood. They go on vacation out to Los Angeles, which Annie loves but Alvy hates, and on the plane ride back to New York they decide to break up. Alvy despises the city of Los Angeles while Annie finds it clean. Alvy says: “They don’t throw their garbage away, they turn it into television shows.” In another hilarious scene from Los Angeles they attend a party where cocaine is passed around and Alvy accidentally several thousand dollars of white cocaine into a cloud onto the carpet. They return to Alvy’s flat to divide their possessions. Alvy’s flashback on their relationship wanders a bit, remembering some of the good times together, and he wanders up and down the streets in another hilarious scene asking random strangers the meaning of their relationships (a random stranger responds: “Uh, I’m very shallow and empty and I have no ideas and nothing interesting to say.”And then his girlfriend also replies: “And I’m exactly the same way.”) Amusingly, Alvy walks by a man walking down the street and says: “There’s the winner of the Truman Capote look-alike contest” (the man is actually Truman Capote making a brief cameo in the film). In another hilarious rule-breaking scene, Alvy imagines himself in cartoon form arguing with a cartoon version of Annie as the Evil Queen from Disney’s Snow White. After some meaningless dating, Alvy and Annie get back together but it soon fades thanks to the wisdom of therapy. Annie moves out to Los Angeles to pursue her music career, and Alvy flies out to her and proposes marriage which Annie declines. Now lugubrious, Alvy returns to New York and stages a play of their relationship, only the ending is revised so that she accepts his proposal.

Alvy doesn’t see Annie again until some time later. She has returned to New York and they are both dating someone new. They get together for coffee and laugh about old times in a sentimental, but private scene (i.e. the audience is not invited into this part of their lives). Somewhere along the way their love turned to anger and then it faded into an old friendship. Alvy comments on the essential nature of love, especially if it is neurotic. The film ends with Alvy crossing the street and Annie’s voice can be heard singing “Seems Like Old Times.” It comes full circle with Groucho’s line about not wanting to belong to a club in which he could be a member. This, Alvy believes, is a metaphor for his relationships with women. Alvy found happiness in Annie Hall, the love of his life, but he could not see it at the time, and could not accept it.

The film has a number of minor cameos from the likes of Jeff Goldblum, Christopher Walkeb, Shelley Duvall who plays one of Alvy’s later air-headed girlfriends as they attend a concert (she famously tells Alvy: “Sex with you is really a Kafkaesque experience….and I mean that as a compliment”), and Sigourney Weaver briefly makes her debut as a date of Alvy’s toward the close of the film.

Remarkably, Annie Hall edged out Star Wars in 1977 for Best Picture at the Oscars. The 1970s brought the advent of the massive blockbuster movie, typically pushing aside quirky, intellectual films like Annie Hall.

Annie Hall is a wonderful film. Woody Allen plays his typically funny but clinically neurotic and obnoxiously pathetic lead role, while Diane Keaton delivers an amazing performance as the insecure but maturing small-town-girl-chasing-a-music-career-in-the-big-city, Annie Hall. The film is filled with all manner of allusions to classic cinema, oddball inside jokes, witty cultural insights, rule-breaking moments, sentimentality, and simplicity. Annie Hall is as much a snobbishly intellectual film, as it is a rejection of overly educated pretentiousness. It is at once complex, new, and yet familiar and lovable. It is an amazing picture, one of Woody Allen’s best.