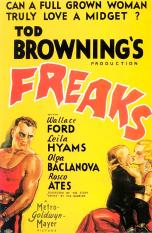 Freaks is an odd horror/B-film, in the same category as other early Browning films from the 1930s. It garnered some minor controversies for its grotesque depictions of sideshow carnies with unusual disabilities and afflictions. The film was banned in the United Kingdom for several decades. Freaks is something of a cult movie now.

It tells the story of a trapeze artist who joins a traveling carnival group of “freaks” so that she can steal the money from a wealthy “midget.” As time passes (the film lasts slightly longer than 1 hour), he falls in love with the new member of the cohort (she is inducted in a creepy seance where the people sing “one of us, one of us, gooble, gobble, gooble, gobble…” over and over), however he soon realizes that she is only feigning love to take his money. So the “freaks” stage a scene in which she and her true boyfriend are attacked. In the end, we get a glimpse of her as a mangled creature – half human, and half chicken.

The original screenings for the film were disaster, with one pregnant woman running out of the theatre claiming the film had caused her to miscarry. In an attempt at damage control, MGM ordered significant censorship of the film, and it was cut down to approximately 64 minutes in length. Freaks still received harsh criticism upon its release.

Freaks is a short and fun, albeit slightly disturbing film about the dark underside of carnivals and sideshow acts. It is a Tod Browning cult classic, not unlike The Old Dark House.