“Half of everything is luck, James.” 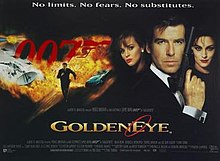 The Bond series was nearly gone for good when it got bogged down in legal concerns, and then Timothy Dalton resigned as Bond after starring in Living Daylights (1987) and License To Kill (1989). After a six-year hiatus, the Bond series rebooted with Pierce Brosnan as the lead. The title for the film is taken from an operation Ian Fleming drafted during his time in the British Naval Intelligence related to the possibility of Franco’s Spain joining the Axis powers. Fleming later named his Jamaican estate in honor of “Goldeneye.”

GoldenEye is a new beginning of sorts for the 007 James Bond film series. It was the first of four Bond films to star Pierce Brosnan. It is also the first not to feature story elements from Ian Fleming, and sadly it shows, though admittedly it is a fun post Cold War adventure. The film was the first to feature Dame Judi Dench as the character “M” and she is one of the brighter spots in the film. Goldeneye was also the first Bond film to use Computer Generated Imagery (CGI), sadly this was not one of the better parts of the film, however I enjoyed the expansion of James Bond into the decaying world of the post-Soviet Union.

The story opens with an MI6 operation in which James Bond and Alec Trevelyan or 006 (played by Sean Bean) infiltrating a chemical weapons facility in Russia. They get cornered and Trevelyan is captured and promptly killed (or so we initially believe). Bond plants a bomb set to blow in three minutes. The site blows up as he narrowly and absurdly escapes while riding a motorcycle off a cliff as he falls and catches a falling plane, climbs aboard, and takes the controls before it can crash to the ground (yet didn’t he bungie jump downward to this facility?). Years later, Bond attempts to retrieve a helicopter in the hands of the sexually sadistic, Xenia Onatopp, but he fails as Russian authorities stop him, and MI6 witnesses an explosion at a Siberian secret site via a Soviet era satellite weapon, a “Goldeneye” which disrupts all working machinery, computers, satellites and so on within a certain region. The Siberian facility, run by data hackers, is attacked by Xenia Onatopp and Colonel Arkady Grigorovich Ourumov acting under the Janus crime syndicate as they steal something from the site. However, two of the hackers escape: Boris, who then joins the Janus group, and Natalya, who goes rogue. Bond visits his gangster friend who facilitates an introduction between Bond and Janus, but Bond soon discovers that Trevelyan was not killed those years ago in Russia. He had betrayed Bond, and is now taking out his revenge on the west for its part in betraying the Cossacks years ago (Trevelyan tells his family’s backstory as Cossacks). He tries to kill Bond (in an easily escapable situation) by placing Bond and Natalya in a helicopter with a heat-seeking explosive, but Bond and Natalya eject moments before the explosion. Bond then chases General Ourumov through the streets of St. Petersburg in a tank, and aboard a heavily armed train, where Bond kills Ourumov. Bond and Natalya narrowly escape the train which is also rigged with explosives. Then, Bond and Natalya travel to Cuba to hunt down Trevelyan and the Goldeneye. Their helicopter is shot down and they are attacked by the sadistic Onatopp, but Bond kills her in a ridiculous scene where he miraculously attaches her to an airplane and she dies as her body is crushed into a tree. They discover the satellite facility of Trevelyan and Bond climbs up into the facility to prevent the Goldeneye from activating while Trevelyan wants to target London and stage a massive robbery. Eventually Bond succeeds in damaging the facility while fighting Trevelyan. They battle while dangling over a huge drop and Bond surprisingly lets Trevelyan fall hundreds of feet to the ground while Natalya rescues Bond and the facility comes crashing down on Trevelyan, killing him. Meanwhile, Bond’s allies, the bumbling and goofy Americans arrive all too late on the scene as Bond and Natalya run away together.

Part of the whole mythology surrounding the Bond series is the backdrop of the Cold War, and the international espionage between the United States and the Soviet Union. Interestingly, this Bond film was the first post-Soviet Union Bond movie. Tina Turner performs the memorable “Goldeneye” theme song, a terrific Bond theme. One fascinating little fact about this film is that James Bond has traded in his classic Aston Martin for a BMW.

Despite being praised for its time, and despite its part in releasing one of the greatest video games of all time, Goldeneye is tired and so wildly unbelievable that it’s hard to imagine much merit to the film, though I do like the idea of a former agent returning to exact vengeance. The plot is absurdly complex, the effects utterly strain credulity (such as the opening scene with Bond jumping off a moving motorcycle, and down a cliff to catch a falling plane and steer it upright again), and the special effects have not aged particularly well. This is a wild ride but there are better Bond movies than this one.