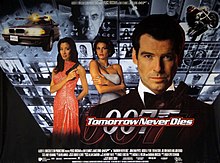 Tomorrow Never Dies is the eighteenth James Bond film, and the second of four Bond pictures starring Pierce Brosnan. It was the first Bond film made after the death of famous Bond producer, Albert R. Broccoli in 1996. The film handed the torch to a new generation of producers, Barbara Broccoli (the daughter of Albert “Cubby” Broccoli). Amusingly, Tomorrow Never Dies was the only one of Pierce Brosnan’s Bond films not to open at number one at the box office (it was released the same day as James Cameron’s Titanic).

The film opens with James Bond investigating a terrorist arms deal along the Russian border when the British Royal Navy decides it can wait no longer. They launch missiles at the site so M (played by Judi Dench) commands Bond to abort the mission. Before he can leave, Bond realizes there are nuclear weapons attached to a jet at the site. He quickly commandeers the jet after knocking unconscious its passenger and flies away seconds before the missiles hit the site and ignite a massive nuclear holocaust. However he is chased by an enemy jet, and in one of the most ludicrous Bond stunts ever, he covertly flies below the enemy jet and Bond ejects his awakening enemy passenger from his jet up into the passenger seat of the enemy jet now above him.

At any rate, the film is about Eliot Carver (perhaps modeled on Steve Jobs or Rupert Murdoch, played by Jonathan Pryce), a media mogul with plans to cause international chaos. Using a cyber-hacker, Carver orchestrates a British frigate to be steered off course int the South China Sea where Carver’s stealth ship attacks the frigate and also shoots down a Chinese plane, making it seem as if Britain has started a war with China. Britain the, predictably, decides to send in forces to recover their frigate. Meanwhile, M and British intelligence send Bond to investigate Carver because his empire released news of the attack hours before MI6 even knew about it. Bond travels to Hamburg where Carver is unveiling his products in a live broadcast, and he meets Carver’s wife, an old girlfriend of Bond’s (played by Teri Hatcher). Bond is taken and attacked by Carver’s men, but he escapes and cuts the power for Carver’s broadcast. Bond and Carver’s reconcile, but upon finding out their history, Carver orders them both killed. Bond infiltrates Carver’s headquarters and recovers Carver’s encoder device, but his former girlfriend and Carver’s wife is killed. The device has been tampered with so Bond goes to China to investigate the wreck of the frigate, where he overlaps with Wai Lin, a Chinese agent on the case as well (played by Michelle Yeoh). They discover a missing missile from the sunken ship, and they also discover that Carver’s plan is to launch a war between Britain and China, and destroy the Chinese government, and then gain exclusive broadcasting rights in China. They are captured aboard Carver’s ship, but Bond uses his watch to detonate explosives that then allow the Chinese and British governments to see the stealth ship, and Bond kills Carver with a massive drill (in another ridiculous scene of escape). And in the end, Bond and Wai Lin escape the stealth ship.

Tomorrow Never Dies is another forgettable Pierce Brosnan Bond film, filled with ridiculous stunts, deus ex machina gadgets, and horrible one liners. Again, the plot is complex and difficult – for example, is there no other way media mogul Eliot Carver can gain exclusive broadcasting rights in China other than to launch a massive stealth war? There are better Bond films than this and apparently the production was marred from the start with pressures to quickly push out a new Bond film after the success of Goldeneye, and also the cast and crew apparently faced constant in-fighting with director Roger Spottiswoode and interpersonal troubles among one another.