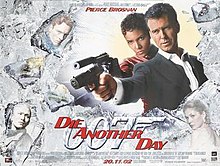 The film begins with Bond in North Korea for a covert weapons trade with Colonel Moon and his assistant Zao, but the plan goes awry as Bond’s identity is compromised. He explodes a briefcase filled with African jewels, many of which get lodged into the face of Zao, while Moon and Bond flee in a dramatic escape leaving Moon killed. Moon’s father, a general in North Korea, then captures and imprisons Bond where he is tortured for years alone in a desolate North Korean prison cell. He is kept alive because Moon Sr. believes his son was collaborating with someone in the West and he wants the name. However, after some time Bond is traded back to the West for Zao, as MI6 believes Bond has broken under torture and revealed covert information to the North Koreans. Bond is stripped of his 00 status so he escapes MI6 custody (in a ridiculous scene involving Bond bringing himself into cardiac arrest. In Hong Kong, Bond discovers that Zao is in Cuba so he flies there and meets an attractive woman named Jinx. He discovers a “gene therapy clinic” wherein Zao has been undergoing gene therapy to transform his appearance, but Bond interrupts the process and Zao escapes. Bond traces him (via a diamond Zao left behind) to Gustav Graves, a billionaire who is unveiling a science project at a special fundraising event in Iceland at an ice palace. Graves and Bond square off fencing, and eventually battling with real swords. Graves unveils a satellite that focuses sunlight for solar crop growth. Jinx (who is actually an American agent) is captured by Graves, and Bond rescues her but he discovers that the Gustav Graves is actually Colonel Moon from North Korea (at the outset). He has been using gene therapy and now appears wholly different. In a dramatic chase scene at the ice palace that starts melting, Bond eventually kills Zao by sending a chandelier crashing down on him, he saves Jinx’s life again. They chase Graves to Korea and discover his true plan – to cut a large hole through the Korean peninsula so the North can invade South Korea. In the process Graves kills his father, General Moon. In a dramatic scene aboard a plane, Bond kills Graves by sending him flying into the engine of the plane, and Jinx kills his deceptive partner, Frost.

Judi Dench reprises her role as M, and John Cleese reprises his new role as the new Q (or “R”). The theme song is performed by Madonna (who also has a small cameo in the film just before the fencing scene).

Die Another Day uniquely portrays Bond as a captured and dishonored torture victim in North Korea, rather than a triumphant and confident hero. The film is about Bond’s efforts to redeem himself and exact vengeance -I found the opening scenes of a disgraced James Bond to be compelling, yet it can definitely be avoided except for the most die-hard James Bond fans. From invisible cars, ice palaces, horrible one-liners, a CGI tidal wave with James Bond surfing. Apparently there was conversation among producers about creating a spin-off series of Halle Berry as Jinx, though after Cat Woman tanked they scrapped the idea. It seems Pierce Brosnan grew tired of the role yet the studio essentially let him go, realizing the series needed a reboot.