For as long as I can remember, the idea of asceticism has always appealed to me. The word “asceticism” comes down to us from the Greek originally meaning something akin to “athletic exercise” or “bodily training.” Today, it means something more like: strict regulation of the body, such as prohibitions from eating meat or drinking alcohol. It can also refer to someone like a monk who renounces the world in favor of a life dedicated to spirituality. The monks of Mount Athos in Greece are a great example of modern asceticism. In the both the Greek and the modern cases of asceticism, pure dedication and devotion to a greater cause are essential. Deprivation, and in some cases extreme deprivation, is a key element of the modern idea of asceticism.

Saint Anthony Tempted by a Heap of Gold by: The Sienese artist known as the “Master of the Osservanza” (c. 1435)

Christianity has a long tradition of asceticism (the stories of Saint Francis come to mind). One of the early and more notable accounts of an ascetic life is Athanasius’s Life of Antony. In this biography, Athanasius writes a letter to his foreign brethren who have been requesting him to give an account of the life of Antony, since Athanasius knew him well, being Antony’s attendant.

Antony was a noble man desiring nothing more than the life of a “plain man at home” like Jacob. He was born and raised in Egypt. When he was about 18 or 20 both his parents died and he was left with one younger sister. Inspired by the stories of the Gospels, he decided to give all but his most essential worldly possessions. He delivered his sister to a group of ‘faithful virgins’ and he then began training himself with patience. From here, Antony spent his time living in solitude, seeking out great men, and working with his hands, having nowhere to keep him rooted. He prayed unceasingly and had an incredible memory for things which he read. As he traveled and worked and discoursed with great men, he learned and grew. 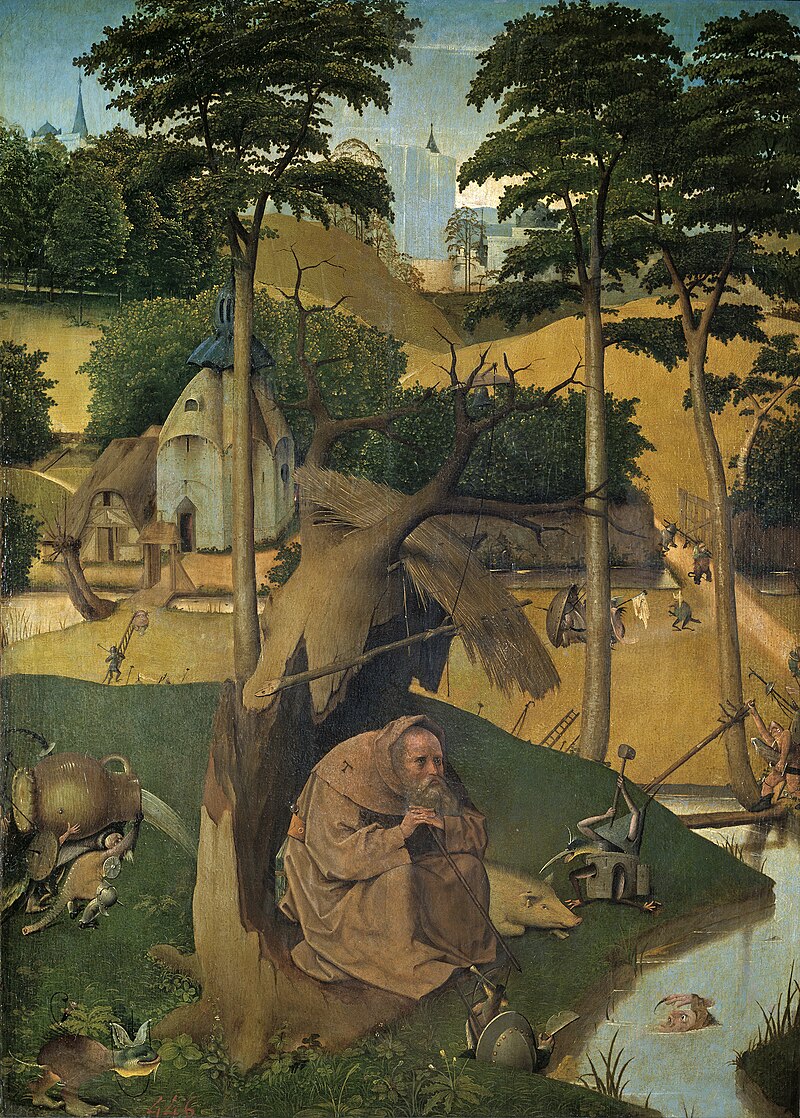 Athanasius details Antony’s struggle with the devil and his temptations. So the troubled Antony locked himself in one of the tombs and the devil and a group of demons painfully attacked him (these scenes inspired the “Temptations of Saint Anthony” works of art in Western literature and culture). After recovering through prayer, Antony goes to live in the desert. He decides to live in an abandoned fort-turned shrine across the Nile for twenty years. Eventually, he emerged, “initiated in the mysteries” and filled with the holy spirit.

Antony’s endeavors spawned the monastic movement in Egypt, according to Athanasius. Antony longed to suffer martyrdom in Alexandria and he amazed many at his zeal and fearlessness in the face of death. Once the persecutions passed, Antony returned to his cell but he was unable to fully withdraw from the many clamoring for him and his fame. He claimed to retreat to his ‘inner mountain.’

He spends his time healing certain people, and even performing certain exorcisms until he grew sick in old age. He died joyfully and was secretly buried. Athanasius offers this stories to his brethren as an example of the way monk’s should live. Those who glorify Jesus will also be, in turn, glorified.

The Torment of Saint Anthony (Attributed to Michelangelo c. 1487-1488)

Athanasius’s Life of Antony was his most widely read text, and I must say it was a pleasant respite from slogging through the more systematic theological treatises of the early Church. Upon being translated in to Latin, and then distributed widely throughout Europe, the Life of Antony helped to bring about a greater interest in the monastic life. Antony is sometimes called the first Christian monk. Athanasius hope (as expressed at the outset of the text) was that readers would gain a newfound appreciation for Antony, as well as a desire to emulate his life. His hope worked. For example, sometime around 340 a young and widowed Egyptian noblewoman named Marcella had heard the story of Antony. Upon hearing of his strife, he immediately converted her mansion into a Christian ascetic community.

With the rise of the Vita, or biographical style of writing, all manner of stories emerged about famous people and their lives (see Plutarch).

Today, Antony has been honored by the Catholic Church as “Saint Anthony the Great.”