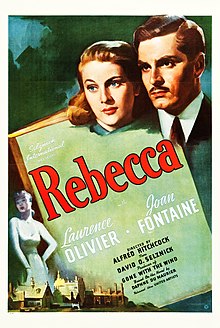 Rebecca is filmed as a hazy, atmospheric, and ominous mystery story of a traumatized young woman, and the psychological ghosts that haunt her new life. However, as with all Hitchcock pictures, nothing is as it seems. The film is told as a flashback; a recollection of a sad but former life. The film is about the darkness of obsession: it is about the idea of someone, the inescapable image that lingers long after they have passed, and the power it holds over people. It is about the need to feel close to someone, and the thin veil that exists between a successful marriage, and the madness of someone like Mrs. Danvers who is in love with a ghost. We don’t even get a name for our anonymous narrator. Her desperation hangs everywhere she goes, but she is too passive to make Manderley her own, while Rebecca still dominates the hearts and minds of everyone she met in life. After all, the title (of both the film and the novel) echoes the name: “Rebecca.” It seems impossible to escape the intoxicating memory of Rebecca. Yet, in the end our narrator has transformed. She is willing to perpetuate the lie of Rebecca’s death in order to protect her marriage. She is not wholly innocent and naive. She escapes Rebecca only in Mrs. Danvers’s suicide in the burning of Manderley, yet our narrator (as evidenced in the opening monologue to the film) still thinks back upon Manderley in her old age. Rebecca is incredible, another triumph for the “master of suspense,” in his first Hollywood picture no less.

Hitchcock’s brilliant Oscar-winning film was based on Daphne du Maurier’s novel of the same name (published in 1938), and which is, in turn, a similar re-telling of Charlotte Brontë’s Gothic novel, Jane Eyre. Rebecca was Hitchcock’s only film to win Best Picture from the Academy. David O. Selznick was hoping to follow-up his highly successful Gone With The Wind in 1939 with another success under the new-to-Hollywood director, Alfred Hitchcock. This was the first film Hitchcock made for producer, David Selznick. Selznick had insisted that Rebecca remain true to the novel, though Hitchcock made some minor adjustments.

“Last night I dreamed I went to Manderley again…” As in the novel, the main character is never given a name (played by Joan Fontaine who also appears in films like Gunga Din in 1939 and Hitchcock’s Suspicion in 1941). She is on holiday with her characteristically ridiculous and domineering employer, Mrs. Van Hopper, in Monte Carlo. Our anonymous narrator is a simple girl (age seventeen) and she works as a paid companion. In Monte Carlo, she stumbles upon a man apparently considering suicide at the edge of a cliff. He turns out to be a wealthy aristocrat, Maxim de Winter (played by Laurence Olivier), a widower who owns a vast castle at Manderley in coastal England. They begin secretly spending afternoons together, but Mr. De Winter is often moody and appears agitated. One day, the holiday is called short when her employer is called home when her daughter is engaged. Suddenly, and unexpectedly, Mr. de Winter casually proposes to his new beau and they leave together to be wed quickly. They honeymoon and move to Manderley, his vast coastal estate. From the outside, the home gives the impression of status and opulence, however our narrator, the second Mrs. de Winter, soon finds the estate to be imprisoning. In particular, the housekeeper and servant, Mrs. Danvers (played by Judith Anderson), is uniquely unfriendly to the lady of the house, and she moves like a ghost through the estate.

Hitchcock deliberately captures the vastness of Manderley throughout the film -the high, arched ceilings, the long creeping shadows, and the hanging haziness that gives the audience the impression of a time long since passed. Our narrator is timid and shy. She is unaccustomed to being a proper lady. Everywhere she turns in the house, remnants of Mr. de Winters’s first wife, Rebecca, lie carefully placed about, as if Rebecca had never died. Rebecca’s stationary, the way she took her meals, her clothes, and even a personally embroidered pillow still consume the house. We learn that Rebecca was a beautiful lady and a gregarious hostess, loved by all, including the servants, but that she died tragically in a boating accident. Gradually, our narrator grows distant and distraught from Maxim. Meanwhile, Mrs. Danvers plants all manner of terrible ideas into the second Mrs. de Winter’s head (and we also learn that Mrs. Danvers’s affection for Rebecca perhaps ran deeper than simply an employer to housekeeper, as Mrs. Danvers embraces the silk and see-through underwear of Rebecca). In order to win the true affection of Maxim de Winter, as well as all the servants, our narrator decides to throw a grand costume party. Under the advice of Mrs. Danvers, she dresses up as a painting of one of Mr. Winters’s relatives, however as soon as she unveils her costume at the party there is a quiet hush and Maxim grows angry. This was the same costume worn by Rebecca only the year prior at a costume party. Our narrator runs out of the room and contemplates suicide (again, urged by Mrs. Danvers), but she is interrupted. A boat has been found with a dead body in it. She rushes to find Mr. de Winter down at the boathouse, where he confesses the events of the night Rebecca died – their marriage had not been well, Rebecca entertained numerous friends and suitors (including her own cousin, Jack Favell (played by George Sanders). In fact, Maxim hated Rebecca (shocking news). She led Maxim to believe she was pregnant from one of her suitors, and she taunts him, so Maxim strikes her. She falls, hits her head, and dies, so Maxim stows her in a boat, and breaks several holes into the hull so it will sink, and he casts adrift on the waves.

The final part of the film involves a renewed investigation into the death of Rebecca. Maxim is now questioned again about any involvement in his late wife’s death. Jack Favell, Rebecca’s cousin and lover, claims to possess a letter that could implicate Mr. de Winter in her death. Favell attempts to blackmail Maxim. However, Maxim refuses to give in to blackmail and in the course of the investigation, it comes to light that Rebecca was secretly visiting a doctor. We are led to believe this was due to her pregnancy, however it turns out she had contracted cancer. Maxim is not found culpable of her death, but upon their return to Manderley, Mrs. Danvers has decided to set the vast estate on fire (a theme also found in Jane Eyre). She would rather die with Rebecca, among her possessions, than continue on. She dies as a shadowy silhouette, crushed by falling rubble. Thus ends the film.

Hitchcock’s cameo appearance occurs at the end of the film. Hitchcock is walking with his back to the audience as Jack Favell makes a call. Apparently, the Hays Office entirely missed the veiled references to lesbianism between Mrs. Danvers and Rebecca.