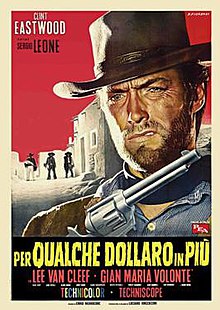 Per qualche dollaro in più is the second part of Leone’s masterful ‘Spaghetti Western’ “Dollars” trilogy. The film stars Clint Eastwood, and also Lee Van Cleef, a fellow American Western actor who experienced a declining career after his appearance in High Noon in 1952, but whose career was catapulted in For A Few Dollars More. He appeared again in The Good, The Bad, and The Ugly.

Clint Eastwood plays the unnamed man whom many call “Manco” -a ‘bounty killer’ who collects rewards for capturing or killing outlaws. He arrives in El Paso, Texas and meets Colonel Douglas Mortimer (Van Cleef), a fellow ‘bounty killer’ and former military man. They both discuss a ruthless killer and bank robber named “Indio” who has recently been broken out of prison. Indio goes to slaughter the family of the man who captured him, and he times his killing to the tune of his pocketwatch. Flashbacks reveal Indio, as a young man, was in love with a woman who did not reciprocate. One day, he walked in on her in bed with another man and Indio shot and killed him, before pinning the young woman, but she secretly grabbed Indio’s gun and shot herself in the side. Indio carries the musical pocketwatch with him now for the timing of duels.

At any rate, Indio’s gang plans a robbery of nearly a million dollars in a safe at the bank in El Paso. Mortimer convinces Manco to covertly join Indio’s gang so the two can disrupt them together. Manco gains admission to the gang by freeing a friend of Indio’s from prison. As his first mission, Indio sends Manco with three others to rob the bank at Santa Cruz, Texas. At this point we are unsure of Manco’s allegiances. Manco kills all three of them and he meets Mortimer who deliberately shoots a grazing bullet across Manco’s neck so that when he returns to Indio’s group he does not seem suspicious with the other three members killed. Meanwhile, Indio and his gang blast the wall at El Paso and steal the safe. The gang then heads to a small border town called Agua Caliente rather than to Rio Bravo (as was initially the plan until Manco persuades Indio otherwise). However, Mortimer is already waiting for Manco and indio’s gang in Agua Caliente, as he anticipated the change. One of Indio’s gang recognizes Mortimer but he kills the man. Mortimer helps Indio break into his safe, thus seemingly winning Indio’s favor, as well. At night, Manco and Mortimer sneak into the hacienda and steal the money out of Indio’s safe, leaving behind his wanted poster. Mortimer secures the safe with a huge lock, but he and Manco are caught and captured while climbing out of the ceiling of the building. They are tortured by Indio’s gang. Oddly, in the night, Indio stages a ruse with his gang – he orchestrates it so that the two prisoners flee because he says he knew they were bounty killers. He hopes that a gunfight between his gang and the two bounty hunters will ensue, killing them all, so Indio can escape with his confidant and the money. However, the two bounty hunters kill of Indio’s gang and Indio catches Mortimer intending to duel with him once the music in his pocketwatch stops, but Manco interrupts and displays another pocketwatch exactly like Indio’s belonging to Mortimer. Manco gives Mortimer his revolver for the duel and Mortimer outdraws and kills Indio. It is revealed that the Indio was pursuing Mortimer sister all those years ago, hence why they have the same musical pocketwatch. Thus Mortimer exacts his vengeance on Indio. Manco then piles up the bodies (after killing one more man sneaking around behind him) and he drives off to collect his bounties while scooping up the bag of stolen money from a nearby tree. Mortimer, having taken his revenge, rides off without claiming any money or bounties.

As with A Fistful of Dollars, For A Few Dollars More was primarily shot in Almeria, Spain. Clint Eastwood almost did not agree to make a sequel to the film. He wanted to see a screening of the original before agreeing to do any more, so the Italian film studio quickly sent an early cut of the Italian language version to Eastwood which he showed to a group of friends (initially downplaying the film) but the group loved it so he agreed to do another. Eastwood was paid $15,000 for the first film, and $50,000 for the second (Van Cleef was paid $17,000).

Each of the three films in the so-called “Dollars” trilogy is a masterpiece. For a Few Dollars More continues the dark theme of Leone’s earlier film, A Fistful of Dollars, in which a lone bounty hunter is in pursuit of money but it just so happens that his goals align with justice and nobility, as he destroys a ruthless gang of bank robbers. As an added twist, we meet Colonel Mortimer, a former military man turned “bounty killer” who turns out to be a revenge-seeker for the death of his sister many years ago. His virtue (i.e. his desire to do the right thing and his lack of interest in money) make him a true hero in the film, however it is Manco who (thanks to his thievery) saves Mortimer’s life and changes the trajectory of the film.

One thought on “For a Few Dollars More”