‘Quintus Septimius Florens Tertullianus’ lived from approximately 155-240. He hailed from Carthage, one of the largest Roman port cities located on the coast in present-day Tunisia. Tertullian has been variously referred to as the “Father of Western Theology” or the “Father of Latin Christianity.” 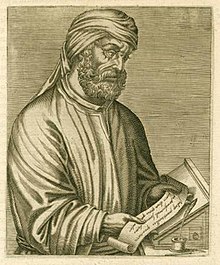 His claim to fame is the development of the concept of the Christian trinitas (or “trinity”), or a group of three entities: God (the father and founder), Jesus (the son), and the mystical Holy Spirit. As one of the last ante-Nicene theologians, Tertullian’s concept of the trinity was incorporated into the Nicene Creed at the first Council of Nicea. His formulation was: “tres personae, una substantia” (or “three persons, one substance”). Borrowing from Greek natural philosophy, substance referred to a kind of “divine substance” shared by all three entities. Tertullian was a “montanist,” that is, he was a follower of an early Christian movement founded by Montanus, that proclaimed new prophets (i.e. the “new prophecy”) originating out of the Phrygian region (present-day Central West Turkey). It was later proclaimed heretical, however Tertullian’s writings have remained influential. Perhaps for his Montanism, Tertullian has never been declared a Saint by either the Eastern or Western churches. Tertullian was apparently drawn to the rigid moralism of Montanism, as well as its proclamation of the coming end of the world. However, Tertullian left this group, as well, to found his own sect that persisted for hundreds of years in Carthage.

Today, we have minimal information in our possession about the life of Tertullian. He wrote voluminously and passionately. Much of what we know comes down to us from Eusebius’s Ecclesiastical History. He was, in essence, the leading predecessor to Saint Augustine of Hippo. He wrote a variety of books on Christian apologetics, polemics, and other theological treatises. By all accounts, he was a fiery and impassioned writer. The account of his decision to convert to Christianity is unclear, however he seems to have made an abrupt decision to do so after visiting Rome, and then returning to Carthage. Jerome suggests Tertullian was a priest and that he lived a long time into old age (both claims have been disputed). He wrote about his admiration for the courage of the Christian martyrs, as well as invectives against his opponents (like many others, he wrote polemics against Marcion’s “heresy”).