How Green Was My Valley (1941) Director: John Ford

How Green Was My Valley is the film version of Richard Llewellyn’s popular 1939 novel of the same name. He claimed the story was autobiographical, but this was proven to be untrue after his death. Instead, he interviewed a number of families from Gilfach Goch, where Llewellyn’s grandfather lived in South Wales (the beautiful set for the film was actually constructed and shot in the hills surrounding Malibu in California).

How Green Was My Valley is an affectionate and beautiful tale. It is Hollywood at its best. Is it excessively sentimental? Perhaps. But for those of us who appreciate a great film that hearkens back to an imagined time of simple, hard-working people and their families, How Green Was My Valley is a near perfect film. There can hardly be a dry eye in the house at the end of the picture when the lifeless body of Gwilym Morgan is slowly raised out of the coal mine. Released on the heels of the United States entering World War II, this film recalls the innocence of youth, heartbreak, loss, and the powerful desire to return to a simpler time. Later in life, John Ford apparently remembered this movie as among his personal favorites.

The story is about the Morgans, a poor but humble family living in a coal mining town in South Wales. The time period is during Queen Victoria’s reign in the late 19th century. The main character and narrator is Huw Morgan -we experience the beauty of his valley through his young eyes. He is the youngest of several Morgan children -his older brothers work in the coal mine with their father, Gwilym Morgan, and Huw also has an older sister who is in love with the town preacher. Consider the beautiful opening lines of the film:

I am packing my belongings in the shawl my mother used to wear when she went to the market. And I’m going from my valley. And this time, I shall never return. I am leaving behind me my fifty years of memory. Memory. Strange that the mind will forget so much of what only this moment has passed, and yet hold clear and bright the memory of what happened years ago – of men and women long since dead. Yet who shall say what is real and what is not? Can I believe my friends all gone when their voices are still a glory in my ears? No. And I will stand to say no and no again, for they remain a living truth within my mind. There is no fence nor hedge round Time that is gone. You can go back and have what you like of it, if you can remember. So I can close my eyes on my Valley as it is today – and it is gone – and I see it as it was when I was a boy. Green it was, and possessed of the plenty of the earth. In all Wales, there was none so beautiful.

The beginning of the movie is pastoral: the hills are green and the townsfolk are friendly. As the film progresses, the plot becomes episodic and we experience a number of small changes in the Morgan family, but the most significant shift in the plot occurs when wages are cut at the local coal mine. The elder Morgan is unable to persuade the owners to pay fair wages so the workers strike, despite Mr. Morgan’s objections against “socialism.” Eventually, the coal mine reopens, but not all the workers in town may return to work. They become more despairing from this point on. Several of the Morgan boys leave to find work in America. Huw’s older sister submits to a loveless marriage for her own security, despite her true love for the town preacher. And Huw attends a school where the boys and the teacher are abusive. Things begin to fall apart for the Morgan family and their beautiful valley. In the end, Gwilym Morgan dies during an accident in the coal mine, devastating the town and the Morgan family.

The film closes with fond reflections and beautiful imagery from a much older Huw (as in the beginning):

“Men like my father cannot die. They are with me still, real in memory as they were in flesh, loving and beloved forever. How green was my valley then.” 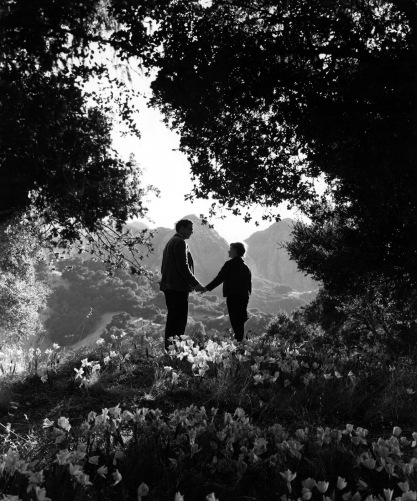 How Green Was My Valley rather infamously beat Citizen Kane and The Maltese Falcon for Best Picture at the Academy Awards in 1941. It was nominated for ten Academy Awards, and won five, including a Best Director award for John Ford, a genius who is typically celebrated for his Western genre films. The film brings together the fiery relationship between directorial genius, John Ford, and Fox producer, Darryl Zanuck. With How Green Was My Valley, 20th Century Fox initially intended to create another massive epic akin to Gone With the Wind, shot on location in Wales, but the outbreak of World War II made that dream impossible.