Live and Let Die is the eighth Eon James Bond film, and the first to feature Roger Moore in the lead role (after Sean Connery refused to reprise the role -though he later returned in the non-canonical Bond film entitled Never Say Never Again, the title being in reference to the fact that Connery vowed “never” to play James Bond again). Both Adam West and Burt Reynolds were approached for the role of Bond. 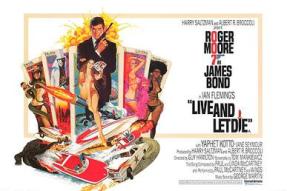 The plot is based on the Ian Fleming novel of the same name. It is something of an odd picture in the James Bond saga as it contains numerous “blaxploitation” references and themes throughout the movie showcasing black drug lords, pimpmobiles, strange voodoo cults, and so on. Also unlike other Bond films which tend to focus on megalomaniacal super villains bent on destroying the world, Live and Let Die is about Caribbean drug trafficking. After three agents are found dead, Bond finds himself trailing an infamous drug lord known as “Mr. Big” who turns out to be Dr. Kanaga (named because of the crew’s scouting for set locations in Jamaica and stumbling upon a Crocodile Farm owned by a man named Ross Kanaga). In the film, Dr. Kanaga is a corrupt Caribbean political leader. There is a pretty remarkable boat chase scene, and in the end, Bond disrupts the planned heroin drug trade. He kills one of the primary henchmen by throwing him into a coffin filled with snakes, he kills Dr. Kanaga by using a small inflatable gadget which causes Kanaga to expand and explode, and Bond rescues Solitaire, the tarot-reading girl of their cult, just before she is on display to be sacrificed. While they escape on a train (perhaps in a nod to From Russia With Love) Bond is attacked by the last remaining henchman from the cult. He kills him by throwing the man out a window (Solitaire was closed in the fold-up bed and unaware of the whole situation unfolding). The film ends with Samedi, one of the voodoo occultists who Bond had thrown into a coffin filled with poisonous snakes, laughing on the train as it speeds off.

Live and Let Die is clearly a departure for the James Bond franchise, though it is certainly not the worst of the Roger Moore era. It is an uncomfortable film at times, with its many racist cliches, but there are worse Bond films and some scenes of New Orleans are actually quite impressive. It is the first Bond film to also feature a black Bond girl -an American agent. At best, Live and Let Die is an entertaining movie and, in the end, what more can you really ask for a Bond picture? At least, the Paul McCartney & Wings theme song is terrific and memorable!

One thought on “Live and Let Die”