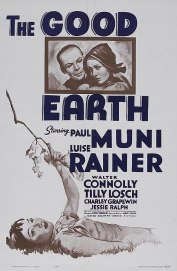 Paul Muni stars in the film as Wang Lung. Muni was also celebrated in 1937 for his Oscar-winning performance in The Story of Louis Pasteur, as well as the Best Picture-winning film, The Life of Emile Zola. Wang Lung is a poor farmer in Northern China who gets married to a slave named O-Lan (Luise Rainer won Best Actress for her performance) and, thanks to his business acumen, once he begins turning a profit from his wheat sales, he purchases more land. He buys land from a once great, now declining, house in the village (the same house from which Wang had acquired O-Lan). However, soon a drought strikes causes massive turmoil for poor Chinese farmers. Nearly everyone starves so Wang takes his whole family to a prosperous Southern city, before returning to build his farming empire. As time passes, Wang has many children but he grows tired of O-Lan and he falls in love with a concubine named Lotus, whom he purchases and moves onto his land. This whole part of the story is present, albeit somewhat glossed over the in the film to keep up appearances that Wang Lung is an innocent and noble Chinese farmer. However, his children bring him great troubles. One day, he catches his son with Lotus and Wang realizes that his son has never had to work the land, so beats his scholarly son and sends him away.

At the end of the film, just like in the book, O-Lan grows ill and dies shortly after witnessing the wedding of one of her sons. The film has met with some minor controversy in recent years as Paul Muni played Wang Lung is “Yellow Face,” though his intent in playing the character in no way belittles Chinese or Asian people. If anything, his performance is much more of a celebration of poor Chinese farmers, an often overlooked group of people in Chinese national history. The producer, Irving Thalberg, initially sought to hire all Chinese actors for the film but he was forced to conceded that American audiences were not ready to relate to such a film. Thalberg died several months before the release of the film -the credits list this picture as one of his last great achievements. The movie was shot on a 500-acre farm in the San Fernando Valley (Porter Ranch, California).

The Good Earth is a decent film, though not one I will soon recommend. The pacing is sluggish and nothing of particular interest happens. It stays relatively close to the plot of the famous novel, or at least as close as one might expect from Hollywood in the ’30s, but the film is mostly dry and uninteresting. The second half of the movie, in particular, seems to drag on and on, only to arrive nowhere. Paul Muni’s performance is somewhat forgettable, as well.

One thought on “The Good Earth”